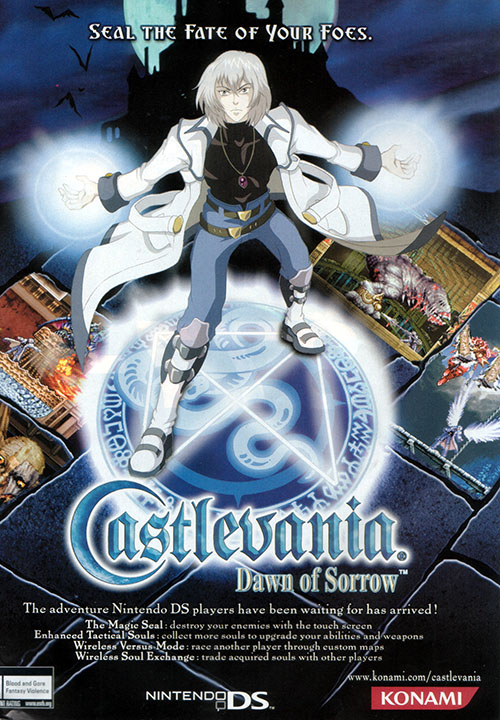 It had been one year since the events of the solar eclipse at the resurrected Castle Dracula (as seen in Castlevania: Aria of Sorrow, circa 2035 AD) and the followers of Dracula were once again trying to bring the Dark Lord back from the dead. Another cult, led by the evil sorceress Celia Fortner (different and unrelated to the cult led by Graham Jones in the previous adventure), gathered at Celia's castle (which was a pretty decent analogue to Dracula's own castle) with a simple goal: bring back Dracula.

The cult had two ways to bring about the Dark Lord once more. Option one was to kill hero Soma Cruz, who was actually the reincarnation of Dracula, just a good guy and not at all evil. Killing Soma would have freed Dracula's soul for a new host -- the cult had two new hosts, Dmitrii Blinov and Dario Bossi, ready for their shot at "glory") -- giving the cult a leader they could worship and love (presumably as he picked up Dracula's war on humanity and wiped all mortals from the planet). Failing that, the other option was to try and tempt Soma to the dark side, forcing the darkness within the hero out, making Soma embrace his "true" fate.

After an initial attack on Soma brought the plans of the cult to Soma's attention, the hero took the initiative and went to Celia's castle to confront the evil cult head-on. Other characters from Soma's previous adventure -- sorceress Yoko Belnades, enigmatic advisor Genya Arikado, vampire hunter Julius Belmont, and ass-kickin' merchant Hammer -- arrived at the castle as well to lend their aid. Hammer and Yoko served as merchants, selling Soma weapons and items (Hammer) and allowing him to fuse collected souls to his weapons to make them more powerful (Yoko). Meanwhile, Julius and Genya were encountered throughout the castle, providing information about the various situations and villains encountered in the game and letting Soma know what he needed to do next.

The two Dracula potentials, Dmitrii and Dario, each attempted to kill Soma in turn; potentially due to their not being the real Dracula, or that Soma was just too powerful, they each were unable to complete the task. In the case of Dmitrii, Soma seemingly killed the young man (even though he attempted not to) and seemingly absorbed the man's soul (even though, as far as he knew, he couldn't absorb the souls of humans, only demons). When he battled Dario later, he did his level best to not kill the man, instead finding a way to de-power the acolyte completely (by defeating, instead, the demon fused to his soul), sending the young man out of the castle to find a new path for his life far away from this land of evil.

Soma eventually found his path to Celia's chamber. Although Celia tried to fool Soma, killing a doppelganger of Soma's friend (and kinda-sorta girlfriend) Mina Hakuba in an attempt to make Soma switch to his evil side, Soma resisted the lure and stayed true to himself. However, while Soma was distracted the soul of Dmirtii, which had been lurking within the hero, made its move. Dmitrii emerged from Soma, having copied the ability to collect souls, "Dominance". Dmitrii knew he was ready to be the Dark Lord, and with this ability he could do it. He grabbed Celia and the two ran off, down to the Abyss, so they could work to fully resurrect Dracula's power properly.

For Celia, though, the Abyss was the end of the line. Although she assumed she'd help Dmitrii rule when he gained his full power, the young man instead sacrificed her, using the blood magic to presumably cement his hold on the power of Dracula. However, Dmitrii wasn't Soma, and as the hero watched, the souls that Dmitrii had been collecting (Celia's included) proved too much too control. They took him over, killing the man as his body became a vessel for all that evil energy, the massive, hulking beast of Menace. To save the world from his beast, Soma was forced to battle in in this demonic abyss, blasting its various bits until, finally, the demonic golem lost control and died.

This ended the power of Celia's Cult, cutting off the head of the snake (so to speak) and eliminating anyone that could lead the cult in the future. The day saved, all heroes fled the castle. Soma was reunited with Mina, everyone had a good chuckle at the "love birds" (because ribbing Dracula always seems like a good idea), and the world was safe in the knowledge that, once again, Dracula wouldn't be coming back any time soon.

As in Castlevania: Aria of Sorrow, direct sequel Castlevania: Dawn of Sorrow features a bad ending: normally, Alucard will give you Mina's charm, a pendant he advises you to wear; if you confront Celia with that charm equipped, Soma will see through Celia's ruse and the player will be led down the path to the "good ending". If you don't equip it, though, Soma will be fooled by the Mina doppelganger and will become the Dark Lord (over the death of his love -- an allusion to Dracula going evil over the death of his wife, Lisa).

The cool thing is that by going down the path of the "bad ending", the player will unlock "Julius Mode". This mode was first seen in the previous title where the player could take Julius through an adventure through the eclipse-locked Castle Dracula. Here, though, the mode is more than just a story-bare side event; instead, the players gain control of Julius, with the help of Yoko Belnades and Genya "Alucard" Arikado, to go on an adventure to defeat the new Dark Lord of the castle, Soma Cruz (and, yes, this does culminate is a battle against the very Dracula-like Soma). While non-canonical, this mode is awesome and benefits from having an actual complete plot (unlike so many other bonus-character modes in the series).

As with the previous game, Hammer is once again included in the cast but he once again doesn't get to play a heroic role in the game (so he's not playable in "Julius Mode"). Leftover data in the ROM of the game has revealed dialogue that hints Hammer might have also once been a planned playable character -- in the terms of Castlevania III, Hammer would have been the Grant DaNasty analogue to Julius/Trevor, Yoko/Sypha, and Alucard as, well, Alucard.

This isn't the last time Hammer will get screwed by tight timelines and budget constraints (we presume). He was also planned to be in Harmony of Despair as a downloadable character. Sadly, with that game not being the success Konami apparently hoped for, Hammer was once again left on the cutting room floor.

To correct this obvious oversight, the editors of the Inverted Dungeon are currently writing a pilot for Hammer & Shaft: Courtroom Crusaders! that we hope will give Hammer his proper dues.

In Japan, a sequel novel was published by Dengeki Bunko, written by Ryogo Narita. Titled Akumajo Dracula: Kabuchi no Tsuisoukyoku (roughly translated as Demon Castle Dracula: Reminiscence of the Divine Abyss), it follows the exploits of Curtis Lang, a young apprentice to Julius Belmont, and features a number of other characters from the Soma Cruz-related games. Although overseen by Castlevania series producer Kogi Igarashi (IGA) this novel is not officially considered part of the canon (especially since it was never exported outside of Japan).

A fan-translation of the novel, titled Castlevania: Ricordanza of the Gods Abyss, was produced by Castlevania fan Shiroi Koumori in 2017. They have kindly contributed the translation to the Inverted Dungeon for fans to read.

Another reason that we note the novel isn't in continuity for the series is that a later entry, the beta-tested but then canceled Castlevania: Grimoire of Souls, was then slotted into the same place on the timeline that this novel would have taken, 2037 AD. That effectively wipes Ricordanza out of the timeline entirely.