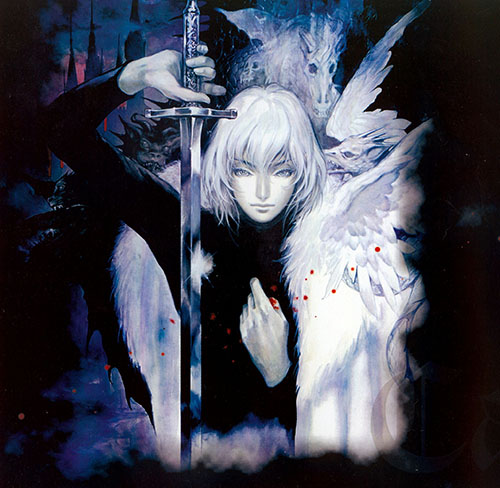 In 1999 AD, Dracula was finally defeated. His castle, the demonic creature of chaos, was sealed away in an eclipse and Dracula's spirit was finally laid to rest. And yet, the followers of Dracula were never able to let go (like a set of very clingy stalkers). When another eclipse happened 36 years later, Dracula's minions made another attempt to bring the Dark princes back to the land of the living.

Seemingly unrelated to this plot line, we are introduced to Soma Cruz, an exchange student (from somewhere else, in Japan). While on a visit to the Hakuba Shrine with his friend Mina Hakuba (an inside source!), Soma and Mina are suddenly transported to a mysterious castle: Castle Dracula. There, they are assaulted by monsters and Soma has to fend them off. In the process, one of the monsters' souls is freed, and Soma absorbed it into himself, stealing a bit of power he could reuse.

A strange man, Genya Arikado, came to the two students and explained that they were stuck within the demon castle until the mystery of its resurrection was unraveled. Soma, for whatever reason, had to be the one to explore the castle and unlock its mysteries (while Mina stayed behind at the castle gates). During his journey, Soma also encountered Yoko Belnades, a sorceress working for the church, there to ensure Dracula was not, somehow, resurrected. He also encountered J, a mysterious man with no memory of who he was or why he was at the castle.

Later it was revealed that J was Julius Belmont. Julius was inside Dracula's castle when it was sealed in the eclipse, and once he regained his memory, Julius set out to stop Dracula's true resurrection. He had a sacred duty to uphold and whenever and wherever the Dark Lord might have appeared, Julius had to be there.

The other major player in the castle was Graham Jones, a dark, villainous man who swore that he would be the vessel for the resurrection of Dracula (he even exhibited a number of very Dracula-like powers). Soma had to battle through the castle, defeating the castle's minions, and working to find out if Graham would be the new dark lord and owner of the evil demon castle. This resulted in a battle between Graham and Soma for the fate of the castle, and humanity, and in the process the truth of the matter was revealed.

No just some hero at the castle, Soma was the true reincarnation of Dracula (which is why he could collect the souls of the monsters in the castle). In an encounter with Julius, the Belmont sees Dracula's spirit within the lad but also the purity of Soma's soul. Upon witnessing the good within the boy, he let Soma live to go on fighting the evil of the castle. With a final jaunt into the Chaos Realm -- the source of all power for Dracula and his demonic fortress -- Soma encountered Chaos itself. In the course of the last, drawn out battle, Chaos was defeated, the castle was permanently sealed, and everyone fled the castle, safe in the thought that Dracula was never going to come back to try and rule the world again. Soma was a purse soul and the power of Dracula was finally at peace.

In the game, Soma collects various souls from the enemies he defeats. Some give him attacks (such as throwing fireballs, bones, or javelins), others give him stat bonuses or defensive benefits, and others still give him secondary abilities to use in exploring the castle (such as turning into a bat to fly around). A specific combination of souls (Flame Demon, Giant Bat, and Succubus -- fireball, change into a bat, and heal from the blood of your foes) are required to get the best ending of the game (the defeat of Chaos). Without those souls equipped during the battle against Graham, Soma is not revealed to be the true embodiment of Dracula, and thus doesn't gain access to the Chaos Realm to seal Dracula's power away permanently.

An alternate ending of the game, where Soma loses to Chaos, has Soma becoming the Dark Lord. A similar allusion to this ending is made in Castlevania: Dawn of Sorrow (circa 2036 AD in the game series). This ending is, of course, non-canonical.

Unrelated to this ending (at least, in this game), you can also unlock Julius mode. Julius will go about the castle, kicking ass and taking names (the editors of the Inverted Dungeon are big fans of this mode). As with many bonus-character modes in previous games, Julius has no actual bearing on the main plot of the game; his adventure is just for fun.

One additional character plays a role in Aria of Sorrow: the merchant Hammer. He's worth mentioning, mostly because he shows up in both games (Aria and Dawn), but aside from selling you various items you may find useful, Hammer doesn't have much bearing on the plot. We at the Inverted Dungeon, though, are currently writing a pilot for Castlevania: Hammer of Justice! that we hope will rectify this slight.