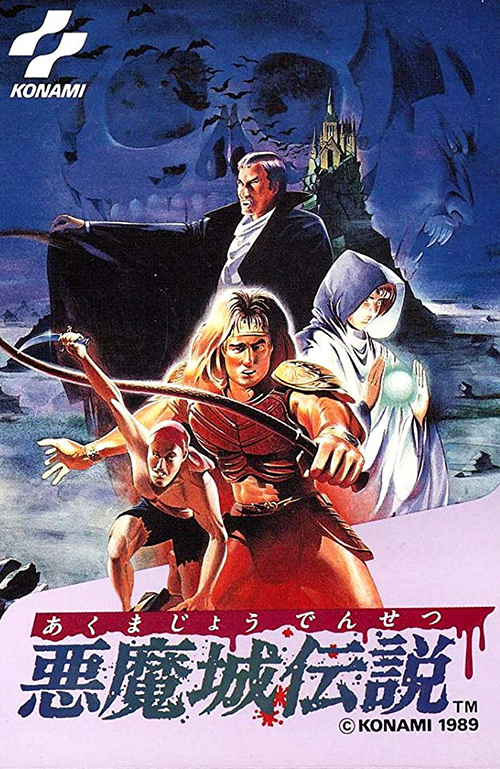 Twenty six years after Dracula's first real defeat at the hands of Sonia Belmont (if we include her game in continuity, something Konami refuses to do), Dracula has risen from the grave. He's raised a new army of the undead to aid him in his quest to take over all of Romania (and presumably the world). The townspeople, appropriately fearful of having their lands under the control of an evil vampire, send a request out to call in a member of the only clan to ever defeat the Lord of Darkness, the Belmonts.

This, of course, after they had kicked the previous Belmont out of town for being too powerful. Plainly townspeople are finicky, twitchy beings.

Trevor Belmont, current owner of the famed Vampire Killer whip, rides to town and immediately goes to Dracula's castle to face off with the Dark Lord. Along the way he encounters three other heroes willing to aid in the quest -- although first he has to free them from Dracula's powers:

Aided by his new companions, Trevor went on to defeat the Dark Lord. After the battle, the heroes went their own ways. Trevor and Sypha got married and continued the Belmont clan. Grant worked to rebuild Romania and otherwise was never heard from again. And Alucard went into one of his many periods of slumber, hoping to rid the land of his power (and thus Dracula's power as well) fearing it was too dangerous to be unleashed on the world.

This game is important to the series for a few reasons:

Firstly, it stars a character other than Simon, on a home console. Simon Belmont was the star of the first two games, and while Christopher Belmont had starred the previous year in his own adventure on the Game Boy, Trevor was the first real glimpse many game players had that there was more to the clan of vampire hunters than just Simon. Additionally, the US translation/rewrite of the Adventure instruction manual was rather vague as to if the game was about Simon or not, which only muddied those waters further.

It was also the first game to have a female character. Sypha Belnades was a trailblazer back in the day, and although the instruction manuals often referred to her as a dude, she was, in fact, female. Or Trevor just swung both ways (we here at the Inverted Dungeon do not judge -- we are all about video game character equality).

Additionally, this game unleashed Alucard on the continuity. Some may lament how often Alucard has been used since this first game, but at the time seeing Dracula have a kid, and having that kid fight Dracula, was considered "cool" (or at least, cool to people playing video games in their mother's basement).

Of course, Alucard really shouldn't be named Alucard. If he was following proper naming conventions, taking Dracula's name would have meant he'd be named Dracula (remember, the ending "a" implies "son of"). Instead, Alucard is Dracula spelled backwards (and is a reference to the Universal picture Son of Dracula, which, amusingly, actually didn't feature the Son of Dracula, just Dracula going under a different name).

Meanwhile, the Lords of Shadow continuity also features Trevor Belmont, famed vampire hunter and knight in the Brotherhood of Light. His adventure, though, takes place 300 year prior to Dracula's Curse (and also in an alternate continuity, of course).

Launched in July 2017, Netlfix began airing a Castlevania animated series. Heavy on the anime-influences (not unlike the game series that birthed it), the Neflix show chronicles the story of Castlevania III (and the events leading up to it). The first season gives us Trevor Belmont, last surviving member of the Belmont clan, as he finds the will to aid the citizens of Romania against a corrupt Church and then, after that, the demonic forces of Dracula.

He's aided in his quest by Sypha Belnades and Alucard (Grant DaNasty having been removed from the story due to time constraints). Although the first season is mostly setup before we get to the castle and the eventual confrontation with Dracula, that's teased by the end (and will likely occur in the longer season two).