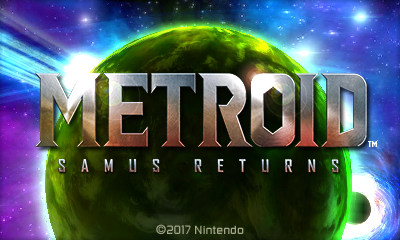 When Nintendo released Metroid: Zero Mission in 2004, remaking the original 1986 Metroid and bringing the game play and mechanics up to the standard of Super Metroid (the game that redefined the series), fans immediately started asking when a similar remake of sequel title Metroid II: Return of Samus would arrive. That was a game that, arguably, needed the remake treatment even more than the original as had a number of flaws inherent to its hardware (the original Game Boy) that a remake would fix. Fans dreamed of a lush, 16-bit entry to replace the original sequel, and they spent 17 years begging for it.

It got to the point where fans, of course, made their own sequels themselves (and this is the point where I have to mention AM2R: Return of Samus). Those games, though, weren't the real deal, it just didn't seem like Nintendo had much interest in Samus Aran and her various adventures (new, old, other otherwise). Once AM2R was released in 2016 and almost immediately DMCA'd right back off the Internet, fans suspected it was because Nintendo had something up their sleeve. Which they did, Metroid: Samus Returns, released a year later and giving Metroid II the official remake fans had been expecting... mostly.

At its core, Metroid: Samus Returns is a remake of Metroid II. It's not as faithful a remake as AM2R, mind you, as that game did try to match up a lot of what it did against the template of the Game Boy game. Instead, for this remake, Nintendo and developer MercurySteam (yes, the guys that worked on the Castlevania: Lords of Shadow series) took the original Metroid II as a jumping off point to tell something similar is style but very different in the details.

You are still on planet SR-388, still sent there to hunt down the metroids that call the planet their home and eliminate the entire species (thus wiping away one of the greatest biological threats to the universe). This does mean slowly tracking through the planet, killing all the "load-bearing" metroids, all leading up to the inevitable fight with the Queen at the base of the planet before scaling back out. That hasn't really changed and remains the plot of the adventure (as much as any early Metroid game can be said to have a "plot"). 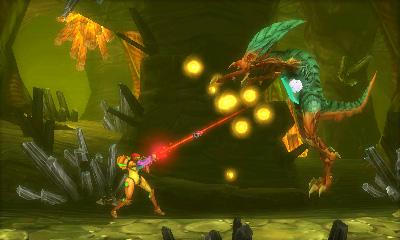 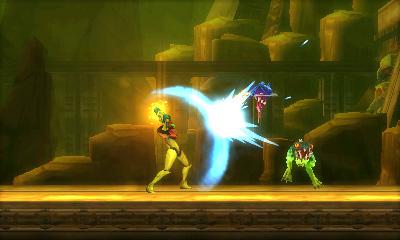 While the story is the same, just about everything else has been changed, top to bottom. For starters, this isn't a sprite-based game but, instead, uses 3D graphics (polygons as well as some of the 3D the 3DS was known for, in cut-scenes and canted angles). In comparison to all the other 2D titles this does look a little weird and I have to wonder why, specifically, this was chosen. My suspicion is that, having come off of Castlevania: Lords of Shadow - Mirror of Fate (a Metroidvania game made on the 3DS with 3D graphics) this was the style of graphics (and even the engine, maybe) the team was used to working in.

The graphics of the game do make it feel more "in line" with Metroid Prime (and there are even some visual nods towards that series). Even without comparing this game to AM2r, though, I do have to admit that the graphics don't really feel up to snuff here. They're fine, but everything feels a little samey, a little muddier than it should, and I think the 3D graphics are at least partially to blame for that. There's a crispness lacking here that all the other 2D, pixel-based games (yes, even the Game Boy entry) had. The samey-ness can be chalked up to the original Game Boy game and the designers staying "true" to that world (although that doesn't really hold up, as we'll discuss in a sec), but everything is the fault of the polygons, for sure.

Once we get into the meat of the game, a lot has changed in this remake. For starters, just about all the items you'd expect Samus to pick up over the course of her adventure (most of which were introduced in Super Metroid) are here as well, added to the few items Samus originally collected in this sequel. That means that along with the Spider Ball, Jump Ball, and all those missiles across SR-388, Samus will now use Super Missiles, Power Bombs, two suits of armor, Grapple Beam, Power Grip, and more. I don't mind the inclusion of these items, mind you, as they were also largely in Zero Mission as well, so for the sake of continuity they should be here, too. However, all these new items drastically change the scope of the world rendering SR-388 nearly unrecognizable from how it was original. Say what you will about Zero Mission but it had some fidelity to the original game. It feels like Samus Returns throws most of that away.

And that doesn't even get into the game play which takes a massive deviation from Super Metroid and its ilk. The big change, which feels like it game entirely from MercurySteam (considering the kind of action they loved to put into the Lords of Shadow games), is the counter system. A great many enemies that Samus fights will be just beefy enough hat she can't immediately kill them with a few blasts from her gun. Instead she'll have to pause and wait for openings, countering as they come in for an attack so that she can stun them and then attack at will. This changes the pace of the game, making Samus Returns feel very different (and much slower) than the other games that have drawn inspiration from Super Metroid (even the Prime titles). It's a change I really didn't like. 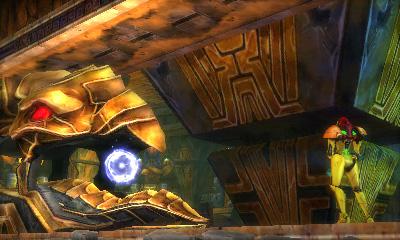 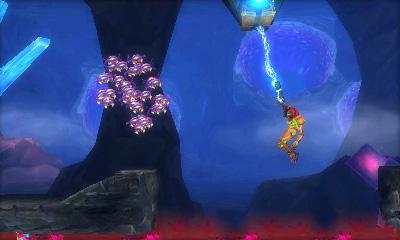 Plus, MercurySteam loves to make infuriating boss battles. All of the metroids in the game feel chunkier, with the later version, the Zetas and the Omegas, being intense, laborious fights that you'll have to do over and over again as you kill all the metroids on the planet. That's in addition to a few non-metroid bosses that have to be fought, the worst of which is a crazed mining droid who is practically an end-boss to themselves with the difficulty that fight lays on. That's not to discount the Queen Metroid who has a very different (and pretty hard) boss fight of her own, plus the addition (spoiler) of Ridley at the end who is frustrating to an extreme. MercurySteam is big on complex and overwrought combat (to a fault, I would argue, in the Lords of Shadow games) and they bring that same kind of fighting to this title, too.

One addition that I think was meant to make the game a little easier was Aeion, an energy type now found on SR-388 (from killing enemies) that can charge special powers -- a scanner for secrets, powered armor, increased damage from weapons, slowing down time, or making Samus invisible. Aeion is finite in the amount Samus can carry (although it can, of course, be extended with Aeion Tanks), and the abilities use up the energy quickly, so Samus has to fight more enemies to get more Aeion, and all this is expected to be used in the boss fights so those battles are harder. It's just a constant loop of slower fighting that required just to keep the loop going. It's not great.

Even in the end game, when Samus should feel really powered up and ready to take on the world, the balance is definitely against her in this game. This is a rough, challenging game that feels harder than just about any of the previous titles. That is, of course, MercurySteam's specialty (something I find infuriating and controller-tossing) but that doesn't make it "fun". It was a conscious decision by the designers, I'm sure, and it's annoying every time I came up against one of their roadblocks in the game when I just wanted to have fun running through halls, searching for items. Combat is part of Metroid, but speed and exploration are important too and it just feels like Samus Returns leans too heavily on combat to the detriment of the rest of the game play loop.

Metroid: Samus Returns isn't a bad game, but it is flawed. Its mix of elements don't quite come together and when you couple that with the muddy graphics, the game feels like it's missing that perfect spark to truly make it feel like a Metroid title. It's a game made by people outside the original team at Nintendo, a copy of a copy in a way, that gets a lot right but also gets plenty wrong. Fans looking for a game that upgraded the original Metroid II for a modern era had what they wanted with the (gone too quickly) AM2R. This title, though, misses that mark just enough to leave you disappointed.