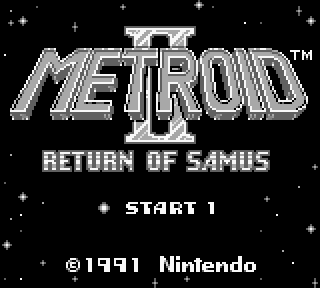 The first Metroid was an instant classic. Although it certainly wasn't the first game to feature a blend of action and exploration (we can point to games like Pitfall II and Montezuma's Revenge as games that started the trend of exploration plus key items) but Metroid was the game to blend it all together in such an evocative package. The game came out in Japan in 1986 and while popular, it was in the U.S. that the game exploded such that, when it was time to develop a sequel, North America was the first stop on lead character Samus Aran's world tour.

Like its predecessor, Metroid II: Return of Samus (titled Metoroido Tsu Ritan Obu Samusu in Japan) featured a brilliant mix of exploration, tight game play, and tense fighting, all set against a sparse, claustrophobic, sci-fi background. The first game helped to launch the Metroidvanias genre (although it would be close to two decades before it gained that moniker), but Metroid II refined it all to prove that Samus had staying power can could extend her reach out beyond a single title.

Set some time after the events of the first game, our space-suited heroine Samus Aran has come to Planet SR388 (different location from the planet from the first game, Zebes) on a mission to exterminate all the metroids in the universe (as they are indigenous to this planet). The metroids (which appeared in a few tense sequences in the first game) are feared as a biological super-weapon and the Galactic Federation wants to see them eliminated before anyone (like the villains of the first game, the Space Pirates) attempt to use these creatures again. This leads Samus through another adventure full of tense exploration as she tries to make her way through the interior of SR388 to complete her mission.

On the plus side, Metroid II featured all the game play and mechanics fans remembered from the first title (and then some). Although this game was released on the Game Boy it didn't suffer from comparison to the original title, offering graphics that compared nicely to the first game, if not better. Samus, for one, is bigger and more detailed, gaining her now iconic look with the big shoulder orbs. The monsters are also detailed and nice to look at, and the world around Samus looks and sounds great considering the Game Boy's hardware.

The game adds a number of mechanics to the original game, although the biggest change were the save stations. Now Samus could save at specific areas of the map (so no having the struggle with passwords) and if Samus were to meet an unfortunate end the player would just be sent back to the last visited save station to reload and go again (which was much better than being sent back to the start of the game to track all the way through the planet again like in the first title). This one convenience makes the game feel so much different (and I'd argue better) than the first.

Along with this, Samus is much more maneuverable, gaining ducking-and-shooting, jumping and shooting straight down, and other basic mechanics than turn her into a more lithe and powerful warrior. Along side these we have more guns, more equipment upgrades, and a lot more to seek out and collect, creating a version of Samus that feels vastly more powerful and interesting to play. This game didn't skimp of finding ways to make Samus the mistress of her domain, and then it provided plenty of things for you to do with these new abilities.

That said, fans and critics were split on just how to feel about Metroid II when it came out. As the game was released on the Game Boy, some concessions had to be made due to the limitations of the hardware. While the game was nice to look at for a Game Boy titles, everything was bathed in the same four monochromatic shades, such that SR388 ends up looking very samey in plenty of its locations. People would comment that it was very easy to get lost in the game, even more so than in the original Metroid, leading to confusion among many players as to where to go and what to do.

This may have been part of the reason for second big change to the game people didn't necessarily like: a more linear structure. Unlike with Zebes in the first game, Samus isn't free to explore the whole of the planet the second she touches down on the Metroid home world. A meter at the bottom of the screen tells Samus just how many metroids are left on the planet. As she explores, looking for these metroids, she'll encounter lava-filled rooms she's unable to pass; once she kills enough metroids, the lava will drain back some, allowing her further access deeper in the planet (thus the fans dubbing these creatures "load-bearing metroids"). This happens repeatedly throughout the game, preventing the player from being able to get to the very bottom of the planet too quick (so no sequence breaking the game, as was possible in the original title).

This restriction means players essentially have to explore everything on the planet before they can move to the next area, even if they know where to go, what to do, and have the means to do it. This rigid structure rankled some fans (and does, even now) as the whole point of the Metroid series is open exploration. While Metroid II gave Samus a whole host of new abilities she could find and use to traverse the planet the fact is that players essentially had to find all of them (nothing was really optional aside from a few missile packs and energy tanks) if you wanted any chance at finishing the game, a stark difference from the previous games (and the titles to come after, too).

Personally I wasn't bothered by this as I'm the kind of player that tends to explore every nook and cranny anyway, always looking for the extra power-ups that will help me get through an areas (since I generally am not good enough to speed-run a title). While I can understand the perspective of the hardcore fans I don't know that I agree with it. I like the structure of Metroid II, and I feel like the linear structure of the title doesn't take away from what the series does best: it drops our heroine onto a desolate planet and leaves her there, alone, to find her own way through the adventure. Her Game Boy title nails that feeling of remoteness and self-reliance that are core to her character.

While Metroid II may not be a favorite game among all the fans of the series I do consider it a successful effort. It's also hard to deny the lasting impact Samus's second adventure had on the series. It expanded the scope of her universe, added in a number of power-ups that became mainstays of the series (especially once the Prime sub-series came along), and setup a number of plot points that would pay dividends for the rest of Samus's storyline. Pretty good for the "weaker" second effort (if you listen to the rabid fans).

There are two major remakes for Metroid II that are worth discussing. The first was a very popular fan game, AM2R (short for Another Metroid 2 Remake). This fan game re-imagined Metroid II, making the graphics, sound, and game play much closer in style to Super Metroid. Released to accolades in August 2016, most reviewers agreed the game was just about everything fans wanted in a Metroid II remake.

Soon after its release, though, the game was hit by a DMCA take-down notice from Nintendo. Any future plans for the game were halted by the developer and they removed it from their website completely... not that it stopped the fans of the game, as they picked it up, shuffled it around the Internet, and have continued making improvements on a (decentralized) copy of the source code. They even went so far as to add in new difficulty modes and a randomizer mode, making for a vastly expanded, and very enjoyable, version of the game.

We mention this not to tell you to go out and look for the game; it was entirely within Nintendo's rights to order to removal of a game that could compete with their own titles. Even though AM2R was released for free, there could have been some that would have balked at paying for any kind of official remake if a great free version was out there. And no, we aren't going to get into a discussion of whether fans might then have been upset over the removal of a popular fan game and would boycott anyway -- the simple fact is that when fans play in official game companies' intellectual properties without authorization there's every chance the company will order the removal of any games made. Nintendo has been very clear about this in the past so it wasn't a big surprise when AM2R was taken down. Even the fans that continue to work on the project do so at the mercy (or not) of Nintendo.

Of course it became perfectly clear why Nintendo had ordered the removal of the fan game: an official remake of Metroid II was announced. Released about a year after AM2R came out, that game came out on the Nintendo 3DS as Metroid: Samus Returns. Different in style from the fan game, the official remake was what every fan would have wanted from Nintendo... well, that is if AM2R hadn't been released before. Many reviewers at the time had trouble discussing the new version without at least mentioning the fan game as well, and it was clear that while the two were different in style, some lamented the loss of the fan-version (even if the remake was a perfectly worthy successor).