Although Dracula's Castle has fallen into disrepair over the years (the peril of being owned by a vampire who occasionally spends 100 years in the grave), you can still see many point of beauty in this once towering edifice. One special place of note is the Royal Chapel, a fine structure carved in red marble and granite. Once the place of worship for all the denizens of the castle the chapel has, predictably, become Dracula's the least frequently visited part of the castle. Because he's a vampire.

One might find it strange that a vampire has a chapel within his castle, but it is so hard to remove the blessing from sanctified ground. But where vampires are unable to tread tourists can still explore. We would point out the fine stained glass, the wonderfully polished brick, and all the statues and reliquaries. The chapel may be old but it is quite lovely. And, if you wander to deep, you might just be invited to remain within the chapel as part of the statue garden, courtesy of Medusa, the groundskeeper.

The first game in the series, Castlevania, set the tone for the chapel in many of its appearances to come. In the second stage of the game, Block 2 (aka the "Red Level" due to the red palette for its sprites), is a long, sprawling tower filled with armors and medusa heads. A perilous journey upwards, the tower leads into its third section (Stage 6 in the game), which features thee distinctive "chapel" qualities: large windows in a hall that lead to an altar decorated with stained glass. It's here that Medusa makes her first appearance, guarding the altar and the way out of the Red Level.

The design was, of course, mirrored in original game's MSX port, Vampire Killer, although the stage did lose its distinctive red flair, coming out more of a warm grey. Due to the limitations of the MXS the stage is broken up into blocks, and keys have to be found to progress deeper (as was the mechanic in this game). Medusa still lurked at the end to spell doom for an unwary hero.

The chapel returns as part of Castle Dracula in Castlevania II: Belmont's Revenge as the final section of a sprawling tower. Although done in black and white, instead of the distinctive red from its first appearance (due to the limitations of the original Game Boy), this is still a perilous tower capped by a proper church with stained glass. Within the final altar room awaits Soliel Belmont, the demoniacally possessed son of hero Christopher Belmont. Besting his son in combat, freeing the boy's mind of the demonic presence, allows the teen to send his father onto the final boss room where Dracula waited.

The distinctive "Red Level" version of the chapel returned once more in Castlevania Dracula X: Rondo of Blood. The layout and style of the stage greatly mirrored its original version, with a long climb up through the floors, past many dangers (and many medusa heads) before reaching one of two paths to take. Should you plunge into one of the pits late in the stage, or simply not take a special elevator out, you'll follow the normal path through the chapel to a fight with the Minotaur. Should you, however, make it all the way to the end of the normal route (before the boss section picks up) and are able to take the elevator (by breaking the rock on the right side while standing on the left elevator cart, via means of an axe) you'll follow the path into Stage 3', the Cemetery, for a battle against Dogether.

As Castlevania X68000 (aka Castlevania Chronicles) is an expanded remake of the original Castlevania, it's second level is another play on the Red-Brick Cathedral (as it's known in this game). It is once again a long and difficult climb upwards past armors, medusa heads, and statues crying bloody tears, all before a new fight against Medusa herself.

It was Castlevania: Symphony of the Night that finally broke tradition in the depiction of the castle's chapel. Dubbed the Royal Chapel here, this tower, while once again a long and sprawling climb, did not feature red bricks of any kind. Instead hero Alucard worked his way up through many long staircases, and a couple of bell towers, all to reach the final boss chamber where upon the hero had to take on the Hippogryph, a new addition to the Castlevania bestiary. Of note, of course, the Inverted Castle had the Anti-Chapel where, naturally enough, Medusa was a resident (mirroring her normal chapel appearances), all before Alucard was sent on an inverted climb back through this reverse cathedral.

A more traditional cathedral is found in the third Game Boy title, Castlevania: Legends. Once again appearing near the end of the game (like in the second portable adventure), heroine Sonia Belmont had to make her way through her own treacherous climb, out from the catacombs below the cathedral and up into the church proper, all before taking on Dracula himself in the altar of horrors. 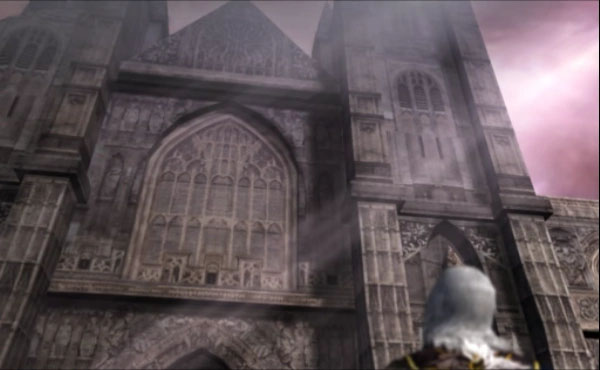 The Chapel of Dissonance (both Castles A and B) in Castlevania: Harmony of Dissonance, was seemingly designed in the Symphony of the Night style. Although overall shorter than the Royal Chapel, it's decorative style, and vertical movement, evoke that PlayStation title. Although functioning mostly as a connector between other zones, the Eye of Vlad is found in this area, meaning the hero will have to visit here not only to explore the castle but also to complete the game (with the best ending).

Dracula's castle in the future (as seen in Castlevania: Aria of Sorrow) also had a chapel, although this time it found a style all its own. While decorated with large stained glass panels (and bearing two short bell towers to explore), the towers of the cathedral followed no previous layout or design. Serving mostly as a connector deeper into the castle, the chapel did feature a boss battle with the Manticore (although it's really more of a sub-boss as each of the game's early bosses, four in total, would appear later in the game as regular enemies to fight).

The cathedral in Castlevania: Lament of Innocence takes a reverse path from so many other stages. It begins up in the main church itself before descending into the catacombs below. There are many secrets to find in this chapel and it's accompanying crypts, all before the hero, Leon Belmont, was faced with a battle against the creepy-crawly Undead Parasite.

The Baljhet Mountains lead into Garibaldi Temple, the cathedral stage of Castlevania: Curse of Darkness. This is a long and sprawling layout, full of many monsters and many strange encounters. This is the first place where hero Hector meets the curious Saint Germain and, near the end of the cathedral, it's the first place where Hector has to battle the vampire hunter Trevor Belmont. It's also worth noting that a secret passage accessible only with the powers found late in the game will lead into deep crypts where hector could battle the secret boss of the game, Legion.

And, of course, the Chapel shows up as a battle arena in the distant future, as part of Castlevania: Judgment. It bears the standard stained glass and other decorative elements, although many of the windows in this version of the area are broken.

Meanwhile, in later-period series extensions, the Chapel serves as the third act of the second stage of Castlevania: The Arcade. The heroes have to battle their way along the ramparts of the castle leading to the distant church, all before battling the headless Dullahan before clearing the stage.

Finally, the Wii-exclusive Castlevania: The Adventure ReBirth featured a very twisty cathedral as its fourth stage. The stage begins in the main building, with a descent down one tower that leads into the main body of the cathedral. This then leads into a maze-like central transept. This section is a series of rooms that loop back upon themselves. Taking one path (which is locked by two keys hidden in the maze) will lead through the crypts of the cathedral, with is crossed with webs as spiders climb about before a tower climb back up the body of the church. The other path leads to a sub-boss, the Werebat (a very Succubus-like she-beast) before sending hero Christopher Belmont out onto the collapsing ramparts and buttressing at the top of the cathedral before leading up the bell towers. Both paths then converge at the rear tower of the church where the massive Big Golem guards the exit from the stage.

Other Places of Worship:

Although haunted chapels are not featured in Castlevania II: Simon's Quest, churches do serve a specific purpose in the game. Dotted in towns throughout the Romanian countryside, churches are healing depots for Simon, granting him a full restore. A broken church can also be seen at the very start of Castlevania III: Dracula's Curse within the ruins of Warakiya Village, a nice nod to the churches within other towns. 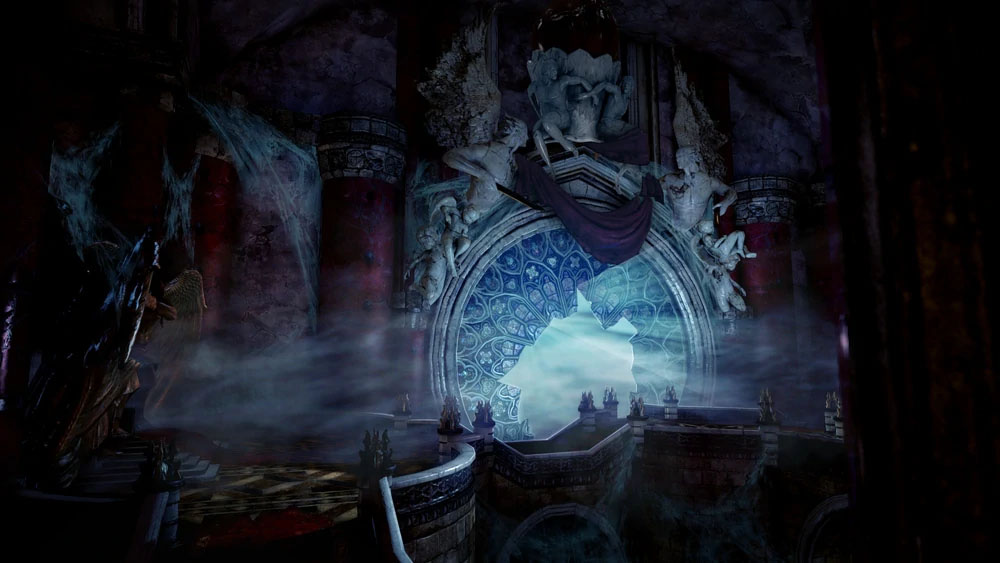 While the castle in Castlevania: Circle of the Moon was not Dracula's, belonging instead to Carmilla, it too had its own "red level". This is a massive tower, decorated in gold and red with huge stained glass windows in the background. Flying swords and evil dolls block many passages, leading to the final bell towers where lycanthropes roamed. Hero Nathan Graves would encounter his (he assumed) ally Hugh Baldwin, who had suffered his own defeat at the hands of the boss, the Adrammelech, before being sent packing back out of the room, a boss Nathan had to defeat if he was to continue on his own journey.

Similarly, Castlevania: Dawn of Sorrow featured a very Gothic castle that did not belong to Dracula. Here a cult of worshipers built their own fortress, decorated in the style of the vampire, and they appropriately put a large and sprawling cathedral tower within. Two bosses blocked the way through the castle -- Dmitrii Blinov and then Malphas (aka Karasuman) -- before Soma was able to collect the much needed double-jump required to get further into the castle.

Naturally enough, the headquarters of Ecclesia, a church-backed group found in Castlevania: Order of Ecclesia, is designed to evoke the same "red level" aesthetic. It serves as the starting area, and training zone, for heroine Shanoa, but it also functions as a boss chamber for a late encounter when the heroine has to battle her former leader, Barlowe, which summons Castle Dracula so the vampire huntress can take out the demon (she hopes) once and for all.

And then, in the last of the Lords of Shadow games, the Cathedral serves as the opening area of the game where Dracula (aka Gabriel Belmont) wakes after a 500 year slumber to find himself in the center of Castlevania City.

Royal Chapel in Castlevania: Symphony of the Night

Anti-Chapel in Castlevania: Symphony of the Night

The Chapel in Castlevania: Legends

Chapel Tower in Castlevania: Circle of the Moon

The Chapel in Castlevania: Aria of Sorrow