Fire in the Blood 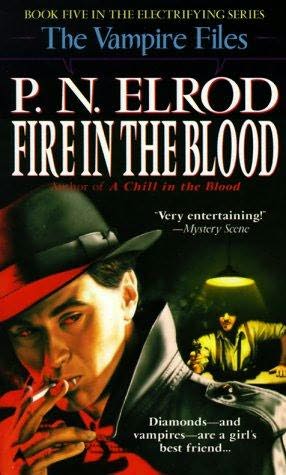 After the really successful fourth book in the "Vampire Files" series, I was looking forward to where the series could go in the future. The fourth novel has answered most of my complaints about the first trilogy of stories and it seems like the novels were on a good path. There was a vampire detective, cases to solve, and world that was steadily building itself in proper fashion without being mired in trying to explain hero Jack Flemming's back-story over and over again. It was great.

Of course, having enjoyed that book, the series would have to work hard to keep up that level of quality. An series, as it goes along, is going to naturally have peaks and valleys, and book four, Art in the Blood, was very much a peak for the series. The question would be if the fifth book could maintain that momentum or if it would hit some kind of slump. Thankfully while I don't think Fire in the Blood is quite as good as the previous volume, it still manages to do enough right to keep the general solid vibe of the series going.

Giving us our first big time jump (as the first four novels in the series all happened within a span of two months), we're now over half a year ahead and times for Jack and business partner/best friend Escott are going well. They've been steadily picking up cases, doing the work of private agents, while Jack, on the side, continues work on a novel (as he was a journalist and, deep down, still wants to be a writer. He's pulled away from his novel when Escott gets a big new case: rich mogul Sebastian Pierce needs the duo to find a missing piece of jewelry that his daughter, Marian, apparently lost. The bracelet has sentimental value and Sebastian will pay handsomely for its retrieval.

Getting back the piece of jewelry, though, proves more difficult that the guys would have liked when they stumble into a murder plot. Soon they're having to deal with not only figure out who stole the jewels but why, and how deep into the Chicago criminal underworld this whole heist tracks. The bodies start to pile up, the case doubles back on itself, and suddenly Jack and Escott don't know who to trust. All they can be certain is that anyone ties to Marian could be a suspect... even if that includes Marian herself.

There are upsides and downsides to this book. The big upside is that P.N. Elrod's prose is still snappy as ever. If anything, this book leans even harder into the gumshoe style of the period than previous books, with both Jack and Escott picking up a number of detective terms to throw into their general lingo. This books feels even more like a 1930s detective novel than the previous books, which I liked. It might have been a touch hammy but it helped keep my mind in the period, which worked for me.

At the same time, I'm still happy to have a case to focus on. These guys are detectives so they should be solving actual cases. The case of the missing jewels isn't all that twisty, nor is the murder case, and I did have it figures out largely by process of elimination long before the book reveals who did the dirty deeds. Even then, I liked the layering on of crimes, from the robbery to the murder, and then a later attempted murder, all piling up and sucking the two detectives deeper and deeper into the muck.

Which, speaking of muck, this book introduces a new heavy for our private agents to go up against: Kyler Vaughn. In the very first book Jack and Escott were sucked into the power struggles of the criminal underworld and, due to their following the case of who killed Jack (essentially forcing his transformation into a vampire) they ended up destabilizing the Chicago crime scene. Vaughn is the new power player in town and, for whatever reason, he ends up with a massive grudge against Jack. This forces our hero to keep an eye over his back for a good portion of the back-half of the novel, while trying to understand how the criminal underworld is tied to the case they're working.

That said, the case itself isn't complex, for all the twists and turns Elrod tries to throw in. The various red herrings drag out the story a bit, forcing our characters into narrative digressions that don't add much to the actual case (even if they do add some nuance to the characters themselves). The case itself, once you have the lay of the land, is pretty shallow; once you know who all is a potential suspect, the number of people that had means, motive, and opportunity are incredibly small, so by the middle of the novel you'll likely already have a suspect in mind. More depth to the main case would have helped this novel a lot.

There's also the issue of Jack himself. For a powerful vampire, he lets himself get put into tight spots more often than he should. He doesn't mind his surroundings, doesn't think that people will double-cross him when they obviously will, and constantly puts himself in stupid positions when he should clearly be acting smarter. This then gets compounded by a mid-book plot device where he goes too far hypnotizing someone and ends up feeding on them almost too death. This complicates his feelings about his powers and he becomes a bit of a sad-sack for a while because of it.

I can appreciate a character who is, for all intents and purposes, a monster actually realizing there's the monster inside of him that he has to watch out for. But the "poor me" attitude he puts on for a big stretch of the book ends up making Jack less interesting. Having him explore his powers and learn there are lines he doesn't want to cross is fine, but the character is a generally charismatic force and the book blunts and muddies that vibe. The character is much less interesting when he's depressed and stuck lamenting his monstrous side. (Strahd, at least, accepted his monster and came to embrace what it could do for him.)

I still enjoyed this book in general, finding it to be a light read that I was tearing through like with the previous novels. But in comparison to the fourth book, which had the right energy for the characters and an interesting case to book (which, admittedly, played to my sensibilities as an artist), this book isn't quite as good, isn't quite as fun, and isn't quite as interesting. Hopefully Elrod find the missing spark and course corrects for the next novel (which, hopefully, will also tie up the Vaughn storyline that was left as a cliffhanger here). There's still plenty of (un)life in these characters, Elrod just has to find the right tone to strike and pull it all together.