I, Strahd: The Memoirs of a Vampire 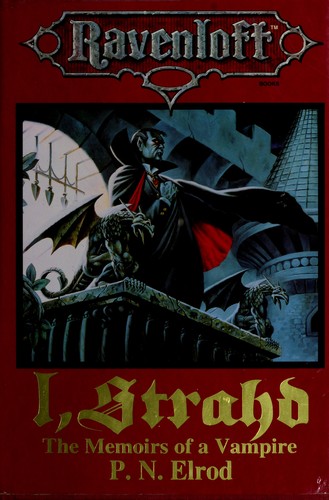 Back years ago, I played my fair share of Dungeons & Dragons (or, if we want to be most accurate, the 2nd edition of the books, Advanced Dungeons & Dragons, as if the "Advanced" somehow made these books elite). My friends and I mostly just romped around in whatever setting we created in our heads, but we did all at least have a passing familiarity with the settings developer TSR published: Dragonlance, Forgotten Realms, and, of course, Ravenloft (among others).

For those unfamiliar, Ravenloft was TSR's Gothic Horror setting filled with nasty monsters and evil creatures. To get into the lands of Ravenloft, such as Barovia (the country of the setting's Dracula stand-in, Strahd Von Zarovich), you had to haplessly wander into mists in your home world, only to suddenly be transported to the lands of the 'loft. Once you were there, though, the likelihood of you escaping was low (as even if you could survive the monsters you encountered, which were like the usual Gothic Horror monsters, but on steroids, there still was seemingly no escape from the land itself). Like a roach motel, once you went in you never came back out.

The setting struck a chord with many players (and not just the Dungeon Masters who loved to put characters in life or death situations that inevitably lead to the "death" side of that equation) but also because this was a dark and nasty setting quite unlike the happy lands of dwarves and elves players were used to. Along with that we had Strahd, the fabled vampire who rules over Barovia like a devil-monsters, killing all who got to close to his castle (the eponymous "Ravenloft"). Plenty had tried to take on the master vampire and kill him, freeing Barovia from his rule, but so far no one had ever succeeded.

That's what made P.N. Elrod's novel about the master vampire so intriguing; three years after the author had started her big series about a Chicago-based vampire detective, Elrod turned her attention towards fleshing out and humanizing "the Devil Strahd" in a novel that documented his early life (and unlife) as conquerer and ruler of Barovia. It's an intriguing idea, like if Dracula were written not from the letters and transcripts of the heroes of that novel but from the diaries of the evil vampire himself. Young me ate this novel (and its eventual sequel) up, loving the setting and the things the novel did with a character that would otherwise be depicted as an antagonist. Going back and reading the novel again, though, I find the construction, and eventual "resolution" of the novel, to be just a little thin.

The novel opens with Strahd, recent conquerer of Barovia, traveling through his new lands as he surveys the land he now owns. Aided by his staff, Strahd put his iron fist of law and order down on this small land before taking up residence at the castle high up in the mountains, which he eventually named "Ravenloft" (in memory of his mother). He has the castle restored and gets about the business of government -- managing boyars, putting down assassination attempts -- all while trying to build up this little country and solidify his rule.

It's when Strahd's younger brother, Sergei, comes to visit his brother that the plot really gets into motion. Sergei, promised to the church to serve as the next high priest, falls in love it a local peasant girl, an orphan named Tatyana. Although Strahd disapproves of this, he immediately falls silent upon meeting the girl as Tatyana is the most beautiful woman he's ever seen. Although Tatyana only has eyes for Sergei, Strahd falls deeply in love with her. This leads him to desperately look for a way to win her over. This leads him to the darkest, blackest magic, and Strahd strikes a deal with Death himself to gain his "heart's true desire." Of course, any deal with the darkness comes with a price, and Strahd would soon learn the true cost of this arrangement...

Told from a first-person-limited perspective (the whole of the book, outside and opening and closing framing device, is told in Strahd's own words), I, Strahd does a solid job of getting you in the mindset of the eventual master vampire. You learn about the man, really get into his mindset so you understand him as a person. The books casts him as an intriguing character, not funny or even really charismatic but with an intelligence that makes the character compelling in his own way. And while he's a hard ruler (especially after he becomes a vampire) you can sort of understand the decisions he makes and the way he crafts the land and, in return, the land crafts him.

That said, where Strahd cuts a compelling and interesting figure, he's brother, Sergei, is kind of a wash. Sergei might be the motivating factor that puts the whole plot in motion -- the love triangle that, tragically, eventually leads to a deal with the Devil (stand-in) -- but Sergei himself lacks much in the way of personality. Some of this, of course, is due to the fact that we only ever know Sergei through the eyes of Strahd, and Strahd doesn't have that high an opinion of the boy. There's also the fact, though, that the book quickly breeze's through a lot of the time with Sergei at the castle, months on end covered in a few brief pages when learning about the young man, and coming to know him as a character, might have made the eventual love triangle that much more tragic.

The same, honestly, could be said of Tatyana as well. Strahd falls for her so we gain a better understanding of her allure at least, but the girl still remains more a a cypher, a treasure to be earned and not a full character in her own right. Something is missing from Tatyana, as well as Sergei and many other characters around Strahd, and these missing moments and elements hold back much of the middle section of the book especially. Strahd just suddenly commits to dark magic to earn a girl we barely know, and the novel hardly explains properly just why he's do this.

And yet, there's much to like about the book. The early act, of human Strahd taking over the land and bringing down his iron fist, does a good job of getting us into his mindset. And then, after the deal with Death, when Strahd is a vampire and the lands around him are irrevocably changed because of it (bringing them in line with the Barovia we know from the gaming setting), we spend a good amount of time realizing the depth of these changes and just what the price what that the vampire truly paid. It's interesting, compelling even in its own right, and adds depth to a character that largely remains an inscrutable monster in the setting itself.

The biggest beef I have with the novel beyond that is simply that it doesn't really have an ending. Although there's a nominal villain (a failed coup attempt part way into the book that leads to a confrontation between Strahd and this attempted usurper), that story is dealt with long before the end of the third act. Instead the novel simply ends unceremoniously, as if the promise of Strahd's story is yet to come. That's likely a result of the fact that this novel ties into the play setting and there simply could be an ending for a character that exists all these centuries later in the setting. Still, it leaves the novel on a slight bit of an off note, not quite rising to a compelling ending after reading about this character from the previous 400 pages or so.

I, Strahd: The Memoirs of a Vampire, then, is a mixed bag, quite compelling at times but with a few glaring flaws I couldn't quite ignore. The main character is the driving force of this novel, and in that regard P.N. Elrod nailed Strahd perfectly. You want to spend time with this character and learn more about him as he goes on his dark and nasty adventures. If only the whole of the book were as interesting as the character at the center of it all.