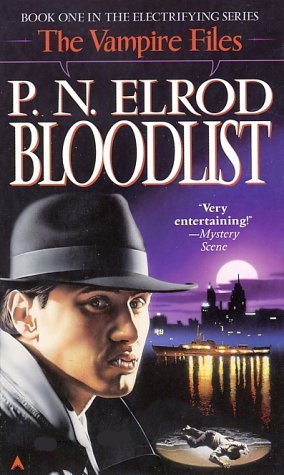 Although I've always enjoyed the various monsters of stage and screen -- often lumped together as the Universal Monsters even though all these creatures came about at different times and different reasons and, for the most part, Universal doesn't control the copyrights for the characters -- I haven't read nearly as much vampire fiction as I have played vampire video games or watched vampire flicks. I'm the kind of reader that will find a single author they like and then read everything they can from that author; finding a new author can be hard, and I'm picky enough that if the first couple of chapters don't hook me I'll write off an author's entire bibliography.

A while ago (decades at this point, which just makes me feel old) I took a chance on a novel by P.N. Elrod, I, Strahd, all because the cover had a cool vampire on it and it tied into the Dungeons & Dragons setting of Ravenloft. I haven't really kept up with D&D, not since they moved away from 3rd edition, but Ravenloft always seems interesting to me; dark and Gothic with a nasty bite to it (no pun intended) that the other settings lacked. If you ended up in Ravenloft, your time always felt limited. It was great.

Although I read both of the books featuring Dracula stand-in Strahd, I didn't pick up the rest of P.N. Elrod's novels, not at the time. I think I was hooked on Stephen King (an author I grew out of around the same time I stopped being a teenager) and that guy wrote a crapton of books, so I was busy for quite some time. Now, however, on my quest once again to find an author (having just finished going to the main series of Terry Pratchett books over on Asteroid G) it seemed like a good time to try P.N. Elrod again and see if their books really were winners for me or if the I, Strahd novels were a fluke.

Happily I can report that the first of the novels, Bloodlist, in Elrod's main series, "The Vampire Files", is pretty solid. It's a good opening effort although there are a few nagging issues that keep it from being great. It does hit a lot of notes I like though -- vampires, gumshoes, a bit of urban fantasy, all while making reference to Dracula and that vampire's fictional works. At the very least it provides a really solid foundation to build a series from here.

We meet hero Jack Fleming on the night he dies. For most people this would be a bit of a hindrance as death is generally considered to be quite permanent, but, due to his death, Jack is now a vampire. As it works within the mythos of the novel, if a vampire feeds on you and then gives you some of their blood, you might maybe eventually become a vampire on the day you die (whenever that is after the fact). Most people are immune to the vampire infection (thus why there aren't armies of vampires running around), but for this "lucky" few the blood of a vampire can make you a vampire too. You just have to die first to find out if it worked.

Waking up on the shore of Lake Michigan, Jack (who had just come to Chicago a few days earlier, looking for a change of scenery after too long spent waiting for his lost, vampiric love back in New York), our hero has little memory of what happened for the last week or, more importantly, why he died. Thankfully he soon falls in with a private agent, Escott, and the two start to piece together to clues, following the facts to solve Jack Flemming's first case in the private dick business: why killed Jack Flemming.

It's an intriguing concept, the idea of a vampire private eye (although, for the length of this book at least, Jack remains an out-of-work journalist, technically) solving the case of his own death. I'm sure I've heard that idea elsewhere before -- people who can travel through time having to solve the case of how they will die -- but it is novel to have it happen after the murder has occured. There's no stopping this; Jack is dead and not coming back from it. Now he just has to learn that it doesn't have to stop him from having a full life.

The novel does a good job of finding ways to play with the vampire formula, taking the various bits of the mythos and using what works while ditching the rest. Jack does have to sleep during the day (the light itself puts him into a stupor and the more he tries to fight it the more damage he does to himself) and, yes, he does have to drink blood (although the blood from any source, human or animal, will do). He also does have some vampire powers, dominance of the minds of others as well as a kind of spectral "mist" form that can let him travel through walls and go unnoticed. But a number of things that should hurt a vampire, garlic and holy objects being the big ones, don't have any effect on him. Wood is his only real weakness, and it does a number on him, unlike any other substance.

I enjoyed the way the novel builds the world, keeping things locked in a tight first-person perspective so we only know Jack's side of anything. Generally the first person narrative can become grating over time, but in this case it works because Jack is, essentially, a gumshoe (whether he takes the official business title or not) and the Noir monologue is part of the shtick. He has to talk to himself because that's what private dicks do. And it helps us, in this case, because as Jack learns what's happened to him and what the change has brought on, we learn everything at the same time. If he doesn't know it, there's no meta-text explaining it to us.

At the same time, though, this book does have one flaw: the case of Jack's death, while pitched as a mystery, isn't really a mystery. Yes, we don't know what happened or why he died, but there really isn't a trail of evidence and a bunch of false clues to follow. This is a world-building novel more than a proper mystery, so while the novel dressed itself up as a case to be solved, the actual solution is just handed to readers near the end of the book. It deflates the climax just a little, keeping this book from really soaring.

That said, I really like the world this first novel crafts, which is good since there are another eleven in the series to consume after this. P.N. Elrod has an easy voice in their writing, a casual way with dialogue that sounds realistic and works well for her characters. Things are described without being florid (again, urban fantasy not Gothic horror) and the books moves along at a solid clip. If it rushes a little to get to the end at least it doesn't take forever to get there. So yeah, as a first novel I think is is a relative success. At the very least I'm interested enough to keep reading, so I guess this is a new author for me to dig through. There are plenty of vampire books from Elrod to read, so I guess I'll be here for a little while now, adventuring through 1930s Chicago with Jack Flemming. I'm currently okay with that.