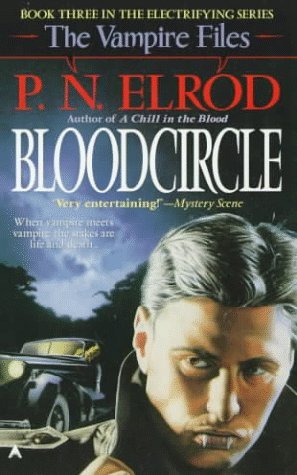 We're three books in and, as I alluded to in my review of the second novel in "The Vampire Files" series, Lifeblood, we're still working on wrapping up the origin story for protagonist (and vampire detective) Jack Flemming. This book, hopefully acts as the capper of the trilogy, finishing out the origins so we can move forward with Flemming (at least, I hope so, having not read further into the series at the time of writing this review). If it is the final origin story book for the series at least its a good one, giving us the kind of fitting conclusion we need so we can move forward with our hero and his pals.

Book one of the series, Bloodlist, explored the day Jack died and became a vampire and the events leading up to that fateful night, while Lifeblood explored the past of Jack's lost lady love, Maureen, and the events that led up to her disappearance. The question still looming for our hero, and what's preventing him from completely moving forward with his new gal, lounge singer Bobbi, is that he still has no clue what actually happened to Maureen (a vampire who gave Jack some of her blood just in case he ever died, which was the kind of foresight that was clearly needed since, five years later, he died). Maureen has been missing for these five long years and still, without word of where she went, Jack just needs some kind of closure.

That's where Jack's best friend (and, essentially, his equivalent of a daytime human protector), the "private agent" Escott, comes in. Having done some research on the side, Escott tracked Maureen's movements five years prior to a small New England town. Apparently she checked in with a friend of hers, Jonathan Barrett (the vampire who turned her, in point of fact), who works as a personal secretary to a reclusive rich woman and her niece. When checking in at the estate, though, Barrett notes that he hasn't seen Maureen in five years, paralleling Jack's own knowledge. Barrett says that Maureen was to stay at the estate for a while, until she was ready to face whoever was coming after her (her sister Gaylen, as it turned out), but then she left suddenly the next day (before Barrett was awake), and never returned.

And that's where the trail goes cold. Although Maureen supposedly took a taxi to a town by the bay, and supposedly took a ferry from there, that seems unlikely as vampires hate to cross running water, even by boat. Following the ferry across to the islands, though, reveals no trace of Maureen there, leading both detectives to wonder if Maureen really took the ferry at all. They both suddenly worry that something bad might have happened to the vampiress all those years ago, and that leaves the residents at the mansion as the only suspects in this tale of lies, love, and deceit. Is Maureen dead (not just undead), and if so, who could have killed her and kept it hidden all this time?

Of the three books so far in the "Vampire Files" series, this one runs the most like an actual mystery. The events around Maureen's disappearance have been a point of contention for the series through these three novels, but this is the first time we actually have something of a focal point for where she went and what could have happened to her. It's also the first time we're presented with real suspects we can learn about, giving us a pool of potential witnesses, clues, and, most importantly, an actual case to work.

That's part of why this is easily the most successful of the books in the series so far. It's focused, presenting its case in a way that actually allows us to take the clues and search through what's presented. And, better still, it ties the case to our protagonist in such a way that he gets what he really needs: closure. This mystery about Maureen has been hanging over him for five years, to the point where he basically assumes she's never coming back (and is likely dead). Finally getting an answer to that promises that we can finally move forward and focus on Jack's life with Bobby after this.

The novels' obsession with Maureen, a woman that was missing for five years and never actually showed up in the books, really has been holding them back. Can Jack really commit to his new girl if there was a chance Maureen could stroll back into town? While that might have made for an interesting love-triangle (on the order of a YA series), it did leave an anchor around the burgeoning relationship as long as Maureen was out there but not actually around. Since we didn't really know Maureen as a character there was no attachment to her, leaving us with a character pining for someone we didn't understand, stuck in the past when a future we could relate to was just waiting for him.

This novel closes out that storyline quite conclusively, and I appreciate that. Bobbi is a character that needs more fleshing out -- she has an interesting back-story, and everything we've seen of her has been great, but she remains a minor character when it comes to the amount of word spent on her in the novels. This book doesn't treat her much better, essentially leaving her in Chicago while Jack and Escott hang out in New England. But as long as the novels can move forward from here, giving Bobbi her due in the process, that is acceptable this time.

I also appreciated the inclusion of another vampire, namely Barrett. Apparently this is a character that shows up in another series of Elrod's books -- "Jonathan Barrett, Gentleman Vampire" -- and he got his start here. As a 200-year-old vampire he lends a nice contrast to Jack, a still fairly newly undead guy learning the ropes of his unlife. Barrett, though, has a cushy setup and knows all about being a vampire, which gives us an idea of where Jack could be, eventually, given the time to evolve and change. It's a promise for the character I like.

Overall, this novel greatly improves the series. It finishes the opening trilogy of the series (which was then published in an omnibus tome that makes it feel like one large book) and sets up the promise for where the series can go. But, most importantly, it closes the book (no pun intended) on Maureen; the novels can finally be free of her story, letting the heroes finally have a hope for growth and evolution. This was the novel the series needed, both for shifting the direction of the series and showing that it can handle actual mysteries. It gives me hope for where we're headed with book four and beyond.