I, Strahd: The War Against Azalin 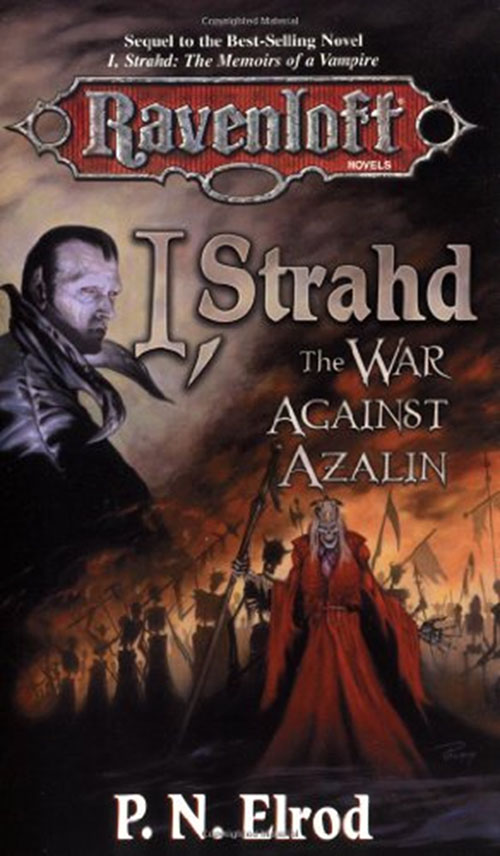 P.N. Elrod started off her writing career working at TSR, writing and editing modules for the company's Dungeons & Dragons line. Although they went off and started writing their own series, "The Vampire Files" (started with 1990's Bloodlist), TSR did eventually come calling, hiring the author to write one of the Ravenloft novels, I, Strahd: The Memoirs of a Vampire. That book, despite being a novel about the evil master vampire at the center of D&D's horror themed setting, actually told a fair compelling story that did a fair bit to humanize the dark fiend.

Strahd, as told in that book, isn't necessarily a "good guy" -- he might be the protagonist but it's too simplistic to lump his actions under either "hero" or "anti-hero" roles -- he does worry about his kingdom, Barovia, and have a strong sense of law-and-order that protects his people (at least from everything other than himself). He is "The Devil Strahd", and that comes with him being a vampire, feeding occasionally on the populace (usually those that break his laws), and having zombified servants shambling around in his halls (again, made from the people that violate his laws), but when people obey his laws and rules, he can be a decent ruler. Not kind, but at least he does consider the needs of his people, and their protection (at least insofar as it serves his own needs in the process).

Where the first book in the duo tells the story of Strahd's rise -- conquering Barovia, setting up his home in the towering Ravenloft castle, and then falling for his brother's fiancee, killing his brother to woo the girl, and in the process making a deal with death to become an ageless vampire -- this second novel shifts its focus away from just Strahd's own deeds (and follies) towards his battle with a worthy foe: Azalin. I will admit I'm not so familiar with the Ravenloft setting as to know who Azalin was before reading this novel -- I suspect, had I played in the campaign setting more, I would know not only Azalin but also some of the other horrible monsters, and their lands, referenced here -- but the novel does a good job of not only introducing this nasty piece of work but also illustrating the push/pill between these two foes and the eventual war to break out between them.

In the last book we learned that, when Strahd became a vampire, the land of Barovia (which he was magically tied to through a naming ceremony) was drawn into a pocket dimension, surrounded by thick mists that prevented anyone who came into the lands from ever leaving it. Since that time, wanderers have ended up in the land, sometimes by ones or twos, but the land itself never expanded. Barovia was trapped by itself, potentially a dying land ruled by a seemingly cruel vampire. Things change, though, when the sorcerer Azalin comes into the land. Arrogant, but powerful, he immediately butts heads with Strahd, but their power dynamic doesn't immediately cause them to go to war. Instead, Azalin wants to leave the trapped realm of Barovia and, in Strahd, sees a like-minded person with the power (and resources) to potentially lend aid and magical ability to the cause.

Of the next few years, then, Strahd and Azalin work on their spells, creating the necessary workshop to channel the magics and the conjurations that would let them potentially open a breach to another world. Each attempt, though, meets with failure. However, after a few attempts, something strange and amazing happens: a new land appears on the border of Barovia. And then another. And another. It seems the spells Strahd and Azalin were casting might have just caused other countries to attach themselves to this pocket realm. This fascinating discovery, though, is tempered with another horrible realization: the reason Azalin is so powerful is because he's a lich, and undead monster who forsook his humanity for more magical ability and unending continuation. And with that realization Strahd knew the truth: the second Azalin elected to turn is attention away from leaving Barovia and towards conquering it, true war would come to the only land Strahd has.

While I rather enjoyed the first book, Memoirs of a Vampire, the one that that book lacked was a strong villain to tie everything together. Strahd cuts a compelling, if reserved, figure, properly anchoring the tale of his rise (and fall, and then resurrection from the grave). I appreciated that the book never apologized for any of the actions he took (if anything, trapping him in Barovia and forcing him to find, and lose, his lover over and over again is a punishment for his deeds), meaning that Strahd could both be the protagonist of his tale and the monster everyone perceived him to be. But the book lacks someone strong for Strahd to play opposite, someone that could give the story a proper plot and direction. Just living Strahd's life wasn't enough, and the first "villains" we did see in the story weren't compelling enough to take a lead role.

The War Against Azalin changes that, not only giving us a powerful foe but one who also proves themselves interesting enough to stand as a challenger to the throne. One thing this book does, over the first novel, is let us into the head of its antagonist. While most of the story is told via the passages of Strahd's memoirs (a conceit carried over from the first book), the novel is dotted with "inserts" from Azalin's our journals, letting us actually hear from the villain in a novel that is otherwise told from a first-person-limited perspective. This does wonders not only for fleshing him out as a character but also letting us view his personality and understanding his motivations. Even before we learn he's a lich, we appreciate him as a villain.

Making him a lich also let's us examine him in comparison to our nominal protagonist. Both of them are undead things, seemingly removed from humanity, and were this a different kind of tale, both would be the villains, attacked by humans to "save their lands!" But making Azalin a lich also lets us see true evil, holding the comparison up to Strahd and tempering our thoughts about him. The book uses Azalin to cast Strahd in a more heroic role, and there by having us root for our "hero" even more.

That said, there are two flaws that keep this book from truly rising to greatness. For one, the Tatyana storyline from the first book is all but dropped here. She was Strahd's motivation to do the things he did, to make the deal with Death and become a vampire. She's mentioned a couple of times here, even with Azalin saying he could, "use her to bait Strahd," but then the story beats don't go anywhere and Tatyana's role in the story is quickly dropped, never to be raised again. It would have been nice to have her in this book in a real capacity, to serve as a distraction for Strahd that divides his attention and leads to real issues with Azalin, but that just never comes to pass.

The other issue is that the promised "War", right there in the title, barely occurs. We get a couple of brief skirmishes, and then one sortie into Azalin's lands (after he claims his own kingdom and raises, literally from the graveyards, an army), but the there really isn't an actual war to speak of. The book dodges the issue, having Strahd essential diffuse it in a way (and spoilers for a 20-plus year old book), but that's not the same as having a proper war. Hell, Azalin isn't even truly defeated, he just slinks off to his castle to plot again.

I'm sure, as with my qualms about the last novel in this set, the reason there isn't a war that reshapes Barovia, and why Azalin isn't defeated, is because the land and the character are essential elements to Ravenloft at the time. Just like we couldn't see growth for Strahd beyond the precepts of the campaign setting, so too was Azalin forced into a specific slot by the time the novel ends. This works well if you're someone that played the setting and just wanted more back-story for the major antagonists, but if what you wanted was a rouse epic of war, magic, and the undead, this book falls off right at the end, leaving us with a whimper instead of a proper climax.

TSR's own machinations are the reason why this book doesn't quite rise as high as it should. P.N. Elrod did magnificent work with what she had available, but her hands were pretty obviously tied here at the end. Plus, this novel feels like it needs a third book to continue telling its story. Hell, it even ends on a note as if promising there would be another one, but that novel never came to pass. Perhaps the "sequel" is the campaign setting, but if that's the case it's a poor substitute for a proper ending if all you did was read the novels. Or maybe there was some other novel, by a different author, that continued this story via a different series. Whatever the case, this book ends on a note that leaves me wanting more but I know I'll never find it, at least not from P.N. Elrod. This book is a solid read, even now on my third time through, but I still wish it could have had a rousing ending that would have really let it achieve greatness.