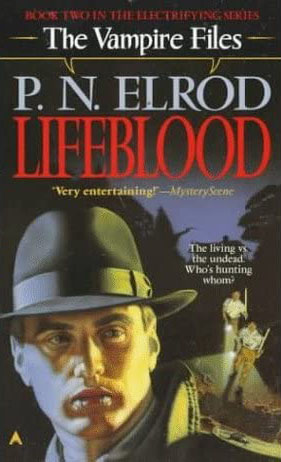 Starting into the "Vampire Files" series with book one, Bloodlist, we ended up getting a bit of an origin story for protagonist Jack Flemming. We woke up with him on the night he died and came back as a vampire. Because he already had dated a vampire a few years prior (and thus why there was vampiric cells in his body that could cause the transition when he died) he already knew the basics of what he needed as a vampire, but we still got to see him go through all the experimentation to really figure out his new life. And, of course, there was the mystery about how he died -- information he didn't remember at the time -- that started up his first case as a "private agent" along side his new friend, Escott.

One would expect that, coming out of that, we'd find a new adventure to explore in the second novel of the series. Instead, though, we're still very focused on Flemming's past. He dated his previous lady, Maureen, for a while and they were deeply committed to her. She had to flee suddenly, and Jack never found out why, and in the five years since Maureen left Jack hadn't heard word one from him. He hoped she'd come back, but eventually he had to stop posting noticed for her in newspaper personals (an arrangement they'd come up with years prior) as he had found a new girl to devote himself to, the lounge singer Bobbi, and was setting up a new (un)life for himself in Chicago. Still, his past wouldn't stay buried, and people Maureen knew are in town looking from Flemming, and for answers.

Thus, instead of focused on a new tale for our hero (and his colleagues) we're just into part two of the origin story for our new vampire detective. In fact, the first three books form a kind of origin trilogy as Jack digs deeper and deeper into the details around Maureen's disappearance as he tries to unravel the story of what really happened to her. I can appreciate wanting to flesh out the back-story for our hero and uncovering all the answers to his questions. However, front loading these books altogether like this leaves me wondering if the whole series is just going to focus on his life before he moved to Chicago. Can a series move forward if it's constantly looking backwards instead?

This book has essentially two plot threads that it follows as it looks to answer the big "case" this time around: why did Maureen leave five years ago. To that end we have two sets of characters to focus on. The first are two vampire hunters out of New York, back where Flemming used to live. These guys (an old book store owner who became obsessed with vampires, and their evil, after meeting Maureen, and the young kid he cons into helping him) are a couple of "true believers" who think all vampires are evil (all evidence to the contrary as they keep stalking Jack). When they saw he'd stopped posting notices for Maureen (assuming they could use him to track down her) they came after Jack, worried he might have been turned. And when they see that he had, they make it their mission to kill him and "free him of his curse" (a situation he's not exactly looking to remedy, through death, any time soon).

Meanwhile, another person from Maureen's past also has arrived in Chicago: Maureen's sister, Gaylen. Years earlier, so Gaylen says, both ladies had met a gentleman he turned out to be a vampire. Maureen became the man's lover and, eventually (after an accident caused Maureen's death), she rose as a vampire. Eventually learning the truth, Gaylen asked Maureen to turn her but, for whatever reason, Maureen ended up leaving before the deed could be done. Gaylen just wants Jack to fulfill Maureen's promise, which leaves Jack in the dilemma of if he even wants to make other vampires and, even more to the point, if Gaylen is the right person to turn if he so chose.

Again, I have no problem with the books exploring our protagonist's back-story over time -- I think it's great we're getting fleshing out of his history and I appreciate the details the author provides so we understand his life before he became a vampire. The issue is that this book really isn't about Jack so much as it's him navigating the sins of Maureen's past. She never appears in this novel (she's been missing for five years and doesn't arrive here at all) but she's easily the character with the most time devoted to her. She's a big figure in Jack's past, but instead of giving us actual stories from her perspective (which might have been an interesting twist) we just have a lot of characters talking about the missing woman (which is vastly less interesting).

This weakens the novel since we have actual characters we want to learn about instead. Jack has a life he needs to build in this novel, but he's stuck cleaning up these messes instead of finding a way to truly move forward. Is he going to be a reporter, which was his previous job, or will he end up working with (or for) Escott, his friend who's a private agent? The book never answers this question, leaving us wondering what exactly Jack's life will look like moving forward.

Jack has Bobbi to think about as well but the novel spends even less time on her than it does on Jack. She's his lady-love now, but she's a barely sketched character. Obviously, since this novel is told from a first person limited perspective (all from Jack's point of view), we can't delve into her head. I wish we did, though, because the few glimpses of insight into her we get paint her as an interesting character with a deep past and tragic details ripe for exploration. But all we get are a few brief scenes of Bobbi and then she's used as a damsel in distress and largely removed from the table for the whole last act of the novel.

And there's Escott who, despite being in the novel almost as much as our hero, we somehow know even less about. The friendship between the two, Jack and Escott, should create a kind of buddy-cop dynamic for the novel, but while the chemistry between the two is strong -- Escott is written with a delightful tone -- the character himself remains something of an enigma. By design the character keeps all his cards close to his chest, but that means we still don't know nearly enough about him to really understand the character. Like with Bobbi the novel seems to think just having a character in the novel is the same as fleshing them out. It isn't.

We do get the answer as to why Maureen went on the run, but it gets us no close to actually finding the woman or learning where she's been all this time (we have to wait for the third novel to get that story). It's nice to get some answers but, frankly, I wish the novel could focus on the characters we actually have in front of us instead of chasing the ghosts of Jack's past. If this had been the sixth novel in the series, for example, giving us sudden answers about Jack's past after he's settled into his new life and we've had plenty of time with all our heroes, that would be one thing. But doing another part of Jack's origin right after his origin story leaves us simply wanting more.

The writing of Jack is great here, as before in the previous novel, and I still want to see more of the character. We just need to get away from Maureen and start moving forward. Sadly we still have one more book to get through before Jack might even have a chance at that.