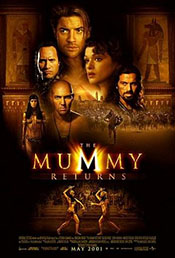 Following a few years after the events of The Mummy, we find that our heroes, Rick and Evy, have gotten married, had a kid, and gotten deeply involved in the archeology business. We join them on an adventure in a pyramid, looking for the Bracelet of Anubis. This trinket has the power to raise and control the army of Anubis (an army of jackal-headed CGI clones, feared by Gungans and droids, and just about as believable on screen -- which is to say not at all).

Back in London, Rick and Evy's bratty son, Alex, puts on the magic bracelet, which reveals directions to the lost, sacred city of Ahm Shere. Ahm Shere, as we learn, is the final resting place of the Scorpion King, a long-dead world conquerer who used the Bracelet of Anubis for his own needs... and then had his soul collected by Anubis (because Anubis giveth, and Anubis taketh away). To complicate matters, if Rick, Evy, and the gang don't get Alex to Ahm Shere in seven days, the bracelet will kill Alex (a strong motivator, but considering how annoying Alex is, not a complete loss, really).

Oh, and Alex has been kidnapped by Imhotep, the movie's returning titular Mummy. Imhotep is back from the dead (again), and is looking to use the powers of the bracelet to take over the world himself. So it's a race against time, and a race get back the kid, all wrapped up into one exciting bundle (excitement not guaranteed, offer void in Utah).

Where the previous film (1999's The Mummy) was a light, breezy affair that rolled along on the strength of a simple plot and fun set pieces, the sequel feels too insubstantial (and, at times, repetitive) to properly continue the series. Several sub-plots are introduced -- such as the rise of the Scorpion King (who, after being given the opening of the movie, doesn't show up again until the last ten minutes), and Imhotep's continued love for the late Anck-su-Namun (reincarnated into a modern day character of little value to the story) -- but they only serve to pad out an inconsequential story and drag out the movie. 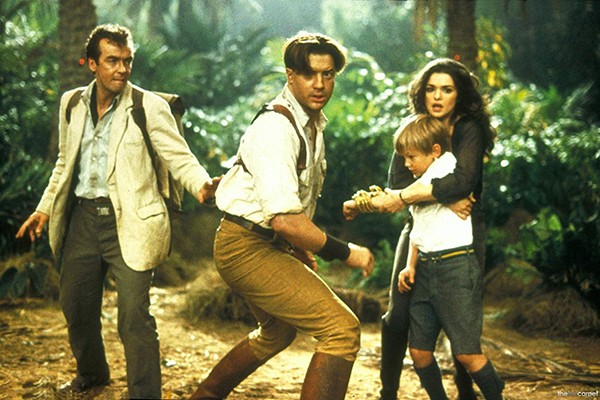 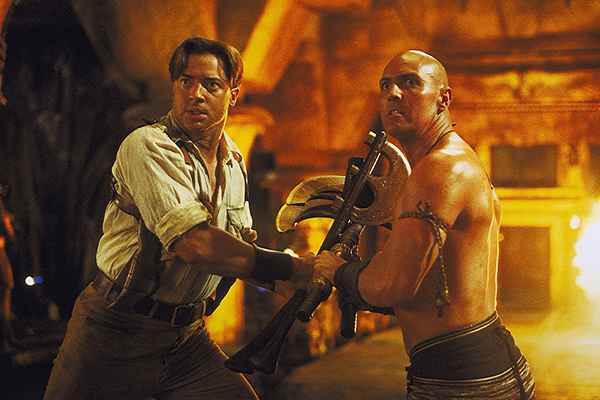 The biggest issue, though, is that the Mummy just isn't a big factor in this movie -- he's not the motivator for the plot. Because Alex, the bratty child, has to get to Ahm Shere or risk death, the true "villain" of the movie is the bracelet. Rick and Evy barely share any screen time with the Mummy, and the final confrontation is really between the Mummy and the Scorpion King than any of the characters that we've actually grown the care about.

It is fun hanging out with the characters from the first movie again. Once again, Brendan Fraser turns in a fun, gruff performance as Rick O'Connell, carrying the action set-pieces as well as the amusing one liners. Rachel Wise does her best with an even thinner role this time out, her character being less spunky than last time. Evy spends most of the movie fretting after her little boy -- a boy that, as I've commented before, is more annoying than useful. They cut the fun soul out of her character, and the movie hurts for the lack of her energy.

Most of the problems with the movie can be hung on Steven Sommers. As with the previous movie, he proves that he's a competent director with a few good ideas, but he hasn't really had any new ideas since the first movie. "Let's just add more and different mummies to the mix" seems to have been the whole plan for this sequel. Already did a master mummy, and servant mummies? How about pygmy mummies? Not enough? Well, let's just throw more CGI at the problem. Jackal warriors and a CGI Scorpion King at the end (literally a scorpion with Dwayne Johnson grafted onto the top of it, centaur-style).

With Sommers at the helm, the Mummy movies are fun in doses, but probably shouldn't have gone past a single flick (unfortunately, even with Sommers out of the way, nothing could help the third flick, Rise of the Dragon Emperor).