Blood from the Mummy's Tomb 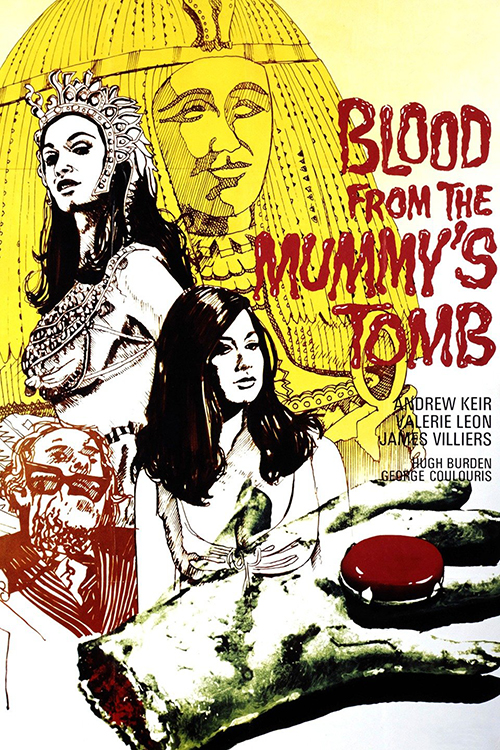 It's interesting going over the Hammer Mummy series largely because calling them a series exaggerates that by a great deal; they're four completely independent films, the only connection being the idea of Egyptian magic resurrecting life. They could have been released by four completely different studios and no one would have known any better. This stands in contrast to Universal's 1941 film and it's sequels, a trio of flicks that created a single continuous story, and certainly is very different from the Dracula and Frankenstein films Universal and Hammer both produced, most of which also fit into their own connected continuities. The Mummy from Hammer is an odd-ball.

The fourth film in the series is certainly the strangest due to the fact that besides the title, Blood from the Mummy's Tomb, there isn't actually a mummy in the movie at all. Yes, there's Egyptian funeral magic, but no one is actually mummified at all. It's like going to a movie called "Rise of the Vampire" and all you get is a normal human that likes to play in bags of blood. Sure, it's close, but the whole concept sold by the title is a lie. Despite this, though, this fourth "mummy" film in the Hammer series is actually pretty decent, by their standards. It won't thrill anyone with modern sensibilities, but it's at least one of their better efforts in this series, as low as that bar has been set.

In the film we watch the funerary rites of Queen Tera (Valerie Leon), a young ruler and powerful sorceress who is entombed in a dark and magic ceremony. She's not actually dead at the time, just placed in a state of perpetual suspended animation, but her evil powers have to be sealed away lest she somehow destroy the world. During the process, the priests set three magical totems in the tomb, the sources of her power, and they cut off her hand which bears a powerful ring that Tera would wear. This they cast out to the coyotes, leaving Tera powerless, the assume. But the hand animates on its own, kills all the priests with dark magic. Tera, though, is sealed away, never to awaken again. Or so the priests thought.

Centuries later, though, an expedition led by Professor Fuchs (Andrew Keir) finds the tomb of Tera and unearths her. They take her body (still perfectly alive and even slightly bleeding from the stump of a wrist) and her artifacts and move her to London for study. At this same moment that they find the Queen, Fuchs's wife gives bright to their daughter in a hospital in London. She dies giving birth, though, and for a moment the baby dies too, only to awaken. This daughter, Margaret (also Valerie Leon), grows up the spitting image of Tera and her father begins to suspect there might just be a connection between Margaret and Tera. And with the stars aligning, and Margaret's birthday coming up, Fuchs fears what might happen. Perhaps Margaret shares a part of Tera's soul, and that for one to live the other must die. Or maybe Margaret will be subsumed by Tera's power. Whatever the case, something has to be done lest Tera is awoken and unleashed on the world once more. 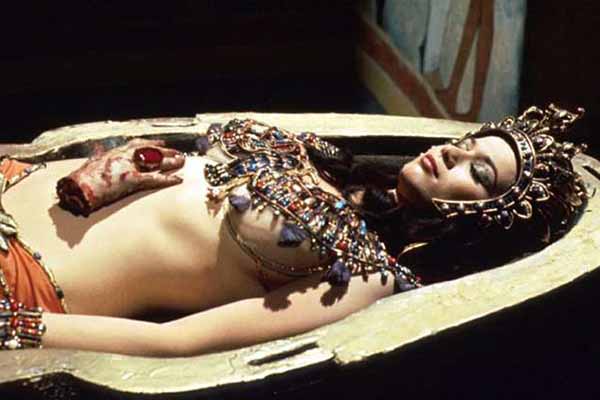 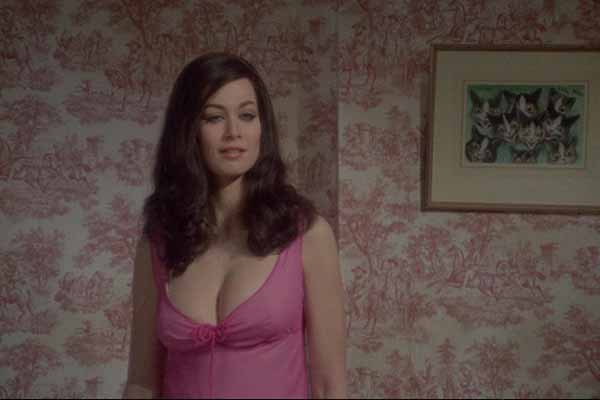 Credit where it's due, this film at least gives us a different take on the "mummy" material from other films in the series. While ladies have played some part in the series, usually they're the love interest of the lead monster, It's always some princess or priestess that the Mummy was in love with back in the day, and now they find their spitting image or they just want someone new to fill the void in their heart. Here, though, there's only one "mummy", Tera, and she's the focal point of the whole story. That's refreshing in a way, at the very least.

The problems are numerous outside that point, though. For starters, Tera never really feels like much of a threat. The film does a very bad job of illuminating why we should fear Tera, what she can do, what she did back in her hey day to deserve being entombed alive, or anything else about her for that matter. Hell, for a good half of the run time I thought Tera was the victim and the heroes would find a way to resurrect her and save the day, all these centuries later.

Certainly that would have been a very different take on the material, but no, the film eventually boils down to just another standard monster film by the half-way mark. Either powered by Tera, or Margaret (since the lines begin to blur there), the priestess's magic starts to spill out, killing the various members of the expedition one by one while Tera has her revenge. If that all sounds familiar that's because it's been the basic plot of every single mummy film up to now, and the movie hits it beat for beat. All the potential of the first half of the film is thrown out for the same old story, told all over again.

It's a pity because the film at least tries to update the material, even if just a little. Aside from having a woman as both the monster and lead protagonist of the picture, the writers also set the film in a contemporary (for the time) setting. Hammer did this for another of their monster series, in Dracula A.D. 1972, and while the updated setting doesn't play too strongly in the actual story -- this could have just as easily been set in the early 1900s and nothing about the tale would have been any different -- it does make the film feel fresh in a way, as if the troubles that archaeologists have with demented mummies coming back from the dead is somehow timeless. 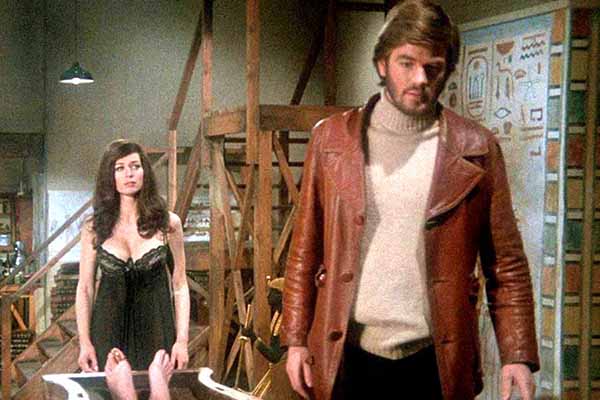 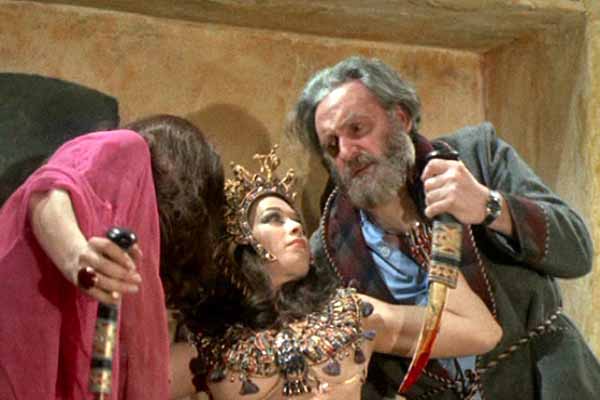 Credit is also due to the actors because while the story isn't all that great, at least they do what they can with what they're given. Leon is solid as Fuchs, playing both sides of the character -- the happy girl and then the demented sorceress -- with gusto. She invests in her role probably more than anyone else in the production, and since she's in basically every scene it helps the movie a lot. Villiers as nominal villain Corbeck is also good, delivering a performance thats slimy and a bit sketchy, hitting the proper notes for the kind of weasel the movie needs. The rest of the cast, while not terrible, aren't given much to do, the luckless Hammer extras and filler characters, but they do perform their roles well enough, certainly never to the point of being distracting.

It's the story that betrays it all. Something different, something new, could have worked off the setting and the game actors and been a really solid tale. Instead we have this, which retreads when it should have zigged and zagged. It's too easy, apparently, to fall into the same patterns because that's what this Hammer film does. I wanted to like it, almost got sucked into it, but in the back half the film all falls apart. It's a good try from Hammer, but still not good enough to make any of these films worthy of more than a quick glance before moving on to something else, something better.