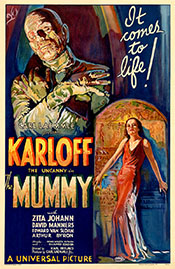 We open in Egypt, 1921, during the time of a great British archaeological expedition. The archaeologists, lead by Sir Joseph Whemple, has just stumbled on a huge find: a previous unknown tomb with a mysterious mummy inside it. The mummy seems to be of Imhotep, an Egyptian priest who was buried alive, presumably having perpetrated some heinous crime. Along with the mummy was a scroll of Thoth, one that was cursed if any should disturb it (and, presumably, anyone who disturbed the mummy). Soon after the discovery, Ralph Norton (assistant to the lead archaeologist) disturbs the scroll, reads aloud from it's contents and awakens the Imhotep. The mummy kills Norton and flees with the scroll, disappearing into the sands.

Eleven years later the dig site is once again active. Frank Whemple, the son of the original expedition's lead, and Professor Pearson are in charge of the dig site. They're visited by a strange man, Ardath Bey, who points them in the direction of a new tomb for them to explore. The tomb ends up being of Princess Ankh-es-en-Amon, daughter of a once great pharaoh. The archaeologists quickly excavate out the site (or, really, have their dig servants do it while they sit in sedan chairs) and then display the treasure trove of items in the Cairo Museum. What they don't know is that Ardath Bay is really Imhotep, the mummy from years earlier (who's looking better although still not great) and he has plans for the scroll, the body of Princess Ankh-es-en-Amon, and a young woman he's just met who is tied in to everything...

Having seen all the more recent Universal Mummy films (The Mummy 1999 with Brendan Frasier and the more recent Dark Universe 2017 film), it's hard to view this 1932 original with fresh eyes. Many of the plot ideas come up again and again in later Universal Mummy films and, depending upon your tastes, are implemented better in those later works. Plus, for modern eyes, most of the older Universal Monsters films can seem pretty quaint and archaic. Still, there's a stuff to like about this movie. This film is certainly different from the later works and it's the differences that really sell it for a modern horror fan.

Boris Karloff is, of course, the best part of this movie. An imposing presence even when freed of any makeup, Karloff was capable of being menacing simply by standing on a set. He didn't have to move or speak -- just be being there he added to the creepy ambiance of a film (which is no small skill). Coupled with his subdued acting style, deep baritone, and a good application of makeup (both as the mummy and the later, somewhat healed Imhotep), Karloff stole every scene -- he was the movie no matter what else was going on around him. 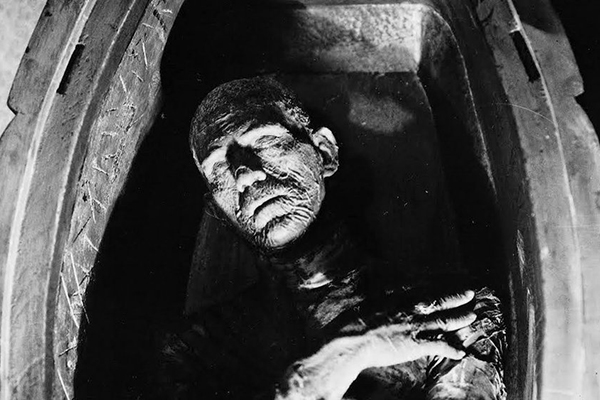 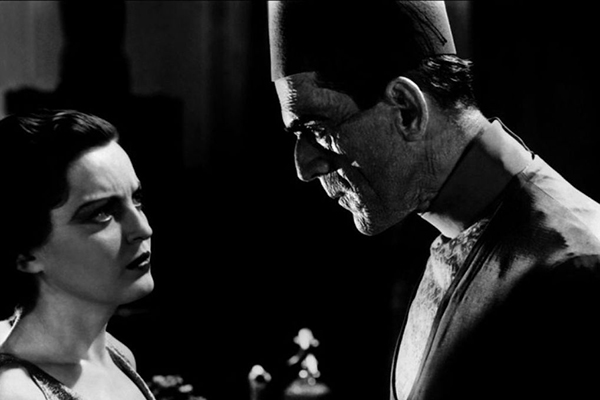 This worked as both a benefit and detriment to the movie as the film was great when he was on screen and pretty crap when we wasn't around. The rest of the characters, even poor Zita Johann (in her dual role as Helen Grosvenor and Princess Ankh-es-en-Amon) seem game to try to keep up with Karloff but unable to rise to the challenge. It doesn't help that many of the characters are pretty much stock fodder, people inserted into the script because we have a villain and a damsel in distress and there's supposed to be heroes, right? The fact that the rest of the cast are basically glorified treasure hunters without any of the charisma or presence of Karloff means you end up thinking of them as somewhere meaningless stand-ins (at best) and the actual villains (at worst).

There's actually the seeds of a more interesting movie hinted at in the story, that of imperialist Britons exerting their will on a ancient and glorious culture. They come in, unearth pure evil (potentially twice, really) accidentally unleash it on the populace, act like they're the good guys, and then work to destroy any evidence of their wrong-doing. All the plot details are there if you look for them but, since this was a 1932 Universal film, none of it was probably intended. "Monsters bad, humans good" is surely the story they wanted to tell and any deeper reading is due to more modern eyes.

In fact, beyond Karloff, the best part of the movie is the fact that the damsel isn't exactly a damsel at all. She has her own agency, he own desires, and (by the end of the movie) she's actually working against the mummy on her own. Sure, the stodgy old white guys act like they have to save her (as with too many movies, back then and now, everything is "for your own good, dear, to protect you" which is obnoxious no matter when it's said) but this lady saves herself when push comes to shove.

So, no, The Mummy 1932 is far from perfect. Like many Universal Monsters films it's a little slow in places with stock characters who make stupid decisions (or leaps of logic that make no sense even when in context). You don't care about many of the characters because you're always, deep down, rooting for the villains. But when you have an actor like Karloff it's hard not to get invested in at least some of what's happening on screen. The villain never wins (because that's part of the Universal formula) but the ride is pretty fun while it lasts. Just try not to think on the politics for too long.