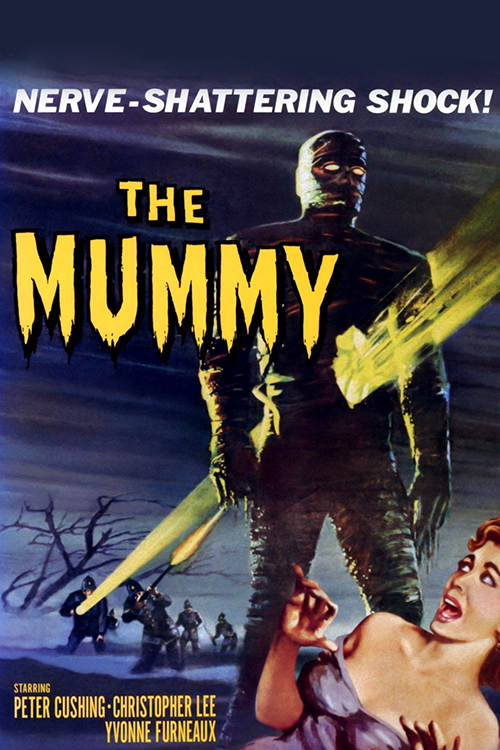 I've noted before I am not a fan of the original Universal Mummy series. While I thought the original 1932 film was pretty decent, powered largely by a fabulous performance by Boris Karloff, the 1940 continuation of the franchise, The Mummy's Hand, and its sequels were absolute chores to get through. Staid and boring with nothing fresh to say about the monster or the subject matter, Universal's "classic" Mummy series were bad enough that they really deserved to be rebooted.

We actually did eventually receive a pretty fun reboot of the Mummy series, the 1999 film, but casual fans of the films may not realize there was another reboot series created many years ago. Launched in 1959 by Hammer films, The Mummy kicked off a four-film series for the studio about the monster, with the details of the series largely based on the Universal films (from The Mummy's Hand on).

But going in and watching the film, I have to wonder why they bothered. I really hated the 1940s Universal films, finding them to be tedious chores, so why was this a film series Hammer felt the need to remake? Considering that mummies (and their supposed curse) have existed for centuries no one could argue a copyright claim on the concept of the monster in general. Why Hammer felt the need to reboot the Universal series boggles my mind. Was there really a big enough following for this crappy monster and his series to warrant a faithful adaptation? I can't really see it.

Whatever the reasoning, we do get another talk of the Banning family and their inability to avoid being killed by monsters. While on an expedition in Egypt, archaeologist (read "authorized grave robbers") John Banning (Peter Cushing), along with his father and uncle, stumble upon the tomb of Princess Ananka, a royal in the Egyptian court who died while on a journey across the land. Although they are overjoyed at their discovery, local Egyptian (and, as we learn, guardian of the tomb) Mehmet Bey (George Pastell) is less pleased. He warns them away from the tomb lest a horrible fate await the team. 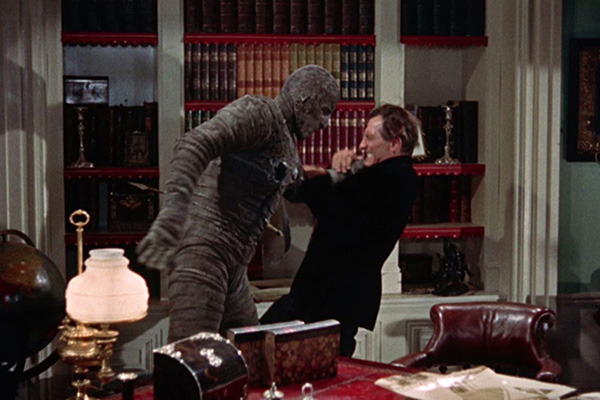 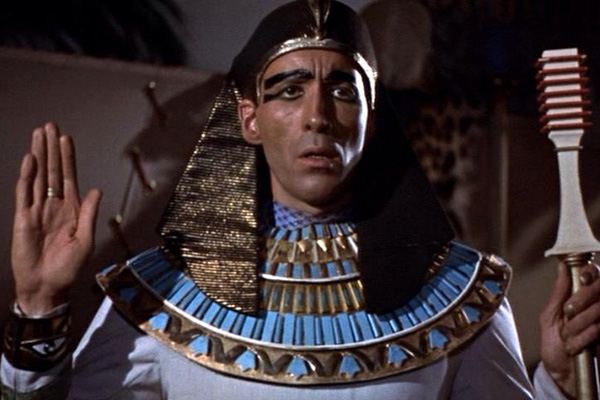 Of course, the excavation team ignores him and opens the tomb. The elder Banning is the first to go in but, while the other two are off at camp, the father has a sudden attack and goes insane, requiring that he be committed. What caused this incident? Well, as the haggard Banning tells John when the father comes out of his stupor months later, there was a living mummy who attacked him and drove him mad. Despite his warning to his son, though, the curse of the mummy is far from over. Mehmet found the mummy, the corpse of High Priest Kahris (Christopher Lee), and brought the living corpse to England after following the Bannings to their homeland, and he uses the Mummy to kill off the Bannings, one by one, as retribution for disturbing the tomb of Ananka. John will have to find a way to stop the mummy and end its reign of terror lest he, too follows the fate of his father and uncle at the hands of the beast.

When I went through and watched the Universal series of 1930s and 1940s Mummy films, the only one I liked was the original. This was because that film actually treated the Mummy as a character and not a plot device. He had real motivations, a real soul, and while he might have been a killer he was less of a monster, more a tragic figure out of time. The rest of the Universal series, though, treated the creature as just that: a mute beast shambling around in rags. The soul of the creature was lost with the sequels and, unfortunately, this is the version of the beast that the Hammer series, for whatever reason, decides to use.

It's a ludicrous decision when you have a powerful actor like Christopher Lee. Why would they take this actor and make him into a mute beast for most of the runtime of the film? Worse, why would they block his natural charisma by wrapping him, head-to-toe, in bandages so we can't ever see him? The only time the actor is actually able to act is in an overly long series of flashbacks that show the ceremonial entombment of first Ananka and then Kharis (after he tries to bring her back with the book of the dead, as clearly blasphemous violation). It's a lot of back-story inserted into the middle of the film, stopping the whole flow of the movie, and it does nothing to actually flesh out the beast. By the time we get to see the monsters, he's little more than a soulless monster, so what was the point of any of it?

The other major issue with adapting this version of the monster is that it nullifies all the surprises. Horror gets a lot of its energy from the unexpected, from using surprise and twists to keep viewers off-kilter. That's part of what works so well about the 1932 original film: the movie allows the titular character to reinvent himself, to plot and scheme, to twist expectations. But by using a version of the monster that's just a shambling beast we never get that reinvention or twisting of expectations. The whole movie boils down to "people open tomb, unleash a mummy, and then pay for it." There really isn't anything more to the story than that, no matter how much the film tries to dress it up with lengthy back-stories. 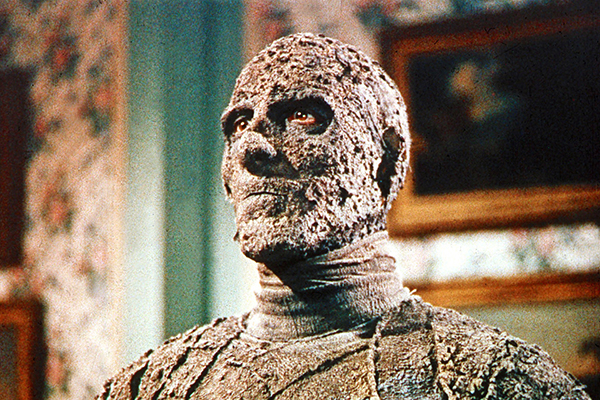 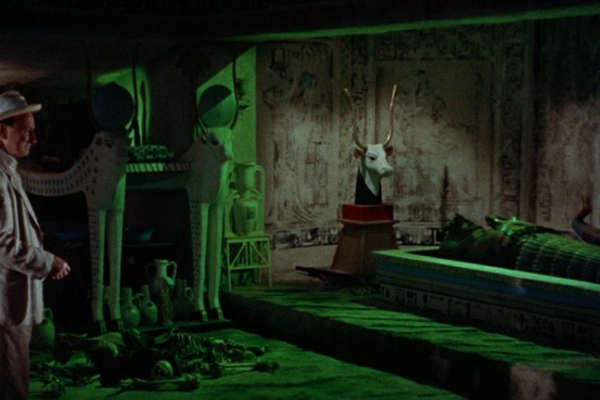 And I have to admit that, even in comparison to other Hammer productions of the era, this movie just feels cheap and chintzy. I usually praise Hammer for their high production values, creating settings and dressing them up with lush costumes all to suck you into the ambiance of the piece, but everything about this film makes it feel fake and artificial. All the sets look like back lot sound-stages, with the Egyptian settings looking especially cheap. Most of the costumes in the flashbacks seem like they were bought from an off-the-rack Halloween store. Nothing here speaks to the lush production values we expect; this is like a bad copy of a better film from the studio.

What I think I hate more than anything, though, is the ending of the film. After slogging through the whole runtime of the film, from the tedious opening, to the boring flashback sequence, and then then rushed to get it over with attacks by the mummy, we come to the point where Banning realizes his wife, Isobel (Yvonne Furneaux) bears a strong resemblance to Princess Ananka (because naturally a white, English woman would look exactly like an ancient Egyptian royal). The mummy realizes this too and, after an attack against Banning, captures the woman and trudges off to the nearby swamps. Somehow she breaks free and swims to shore while the Mummy continues wadding in until it, what, dies? The movie does say it just ends as if that lack of an explanation counts as an ending.

And that's it, the film ends with a (rather literal) wet plop. Nothing about that sequence, or anything leading up to it, feels at all climactic or interesting. The film takes all the elements of the previous Universal films (which also had their share of tedious back-stories., English women that looked like Egyptian priestesses, and final confrontations in swamps), goes through the motions of copying them, and then does nothing interesting or exceptional with it. I hated the 1940s films from Universal, finding them to be tedious, to be sure, but I never expected to find a Mummy film I hated even more. This 1959 effort does the trick by not only being bad but a bad copy of a bad movie. That's quite a feat.