There are a lot of Castlevania: Aria of Sorrow rom hacks out there (28 game hacks on ROMhacking.net, which is twice more than any of the other portable Castlevania games on the site, and that's just counting the ones put up on that website). Although Aria of Sorrow wasn't the biggest success (more successful than Castlevania: Harmony of Dissonance but nowhere near as big as Castlevania: Circle of the Moon when it came to sales), it struck a chord with fans of the series in the years since its release.

It's not hard to see why: of the three Game Boy Advance games released for the series, Aria arguably has the most depth. I love Circle of the Moon and rather enjoy the DSS system, but there's no denying that the depth of combinations you can find for all the souls, the way you can mix and match powers to given scenarios and potentially play through the game with different combinations each time, causes Circle's cards to pale by comparison. There's a special magic about Aria of Sorrow that keeps players coming back to it again and again.

Castlevania: Dawn of Symphony isn't the most elaborate twist on Aria of Sorrow's game play. Unlike some other hacks we've looked at (like Castlevania: Aria of Sorrow Alter), Dawn of Symphony doesn't change the basic construction of the castle. There's no no rooms, no modified maps, with the hack being restrained to mostly just rearranging items and adding in a few new bits to the hero's arsenal. Instead of changing the layout, this hack is primarily focused on story and challenge. The story changes I was intrigued by; the challenge... less so.

In the game we join Alucard and Maria Renard as they appear in Castle Dracula after it's been sealed away. Sent there by the Belnades clan, they arrive at the same time as Dracula, drawn in by the build up of dark magic. But it wasn't Dracula that brought forth the castle; that was, instead Succubus, the villainess who wants nothing more than to steal Dracula's power and make it her own. 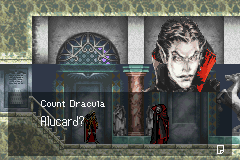 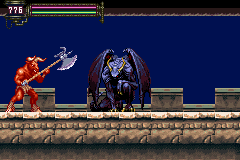 Along side Alucard and Maria, Richter Belmont also arrives, drawn there, too, with a fear about Dracula's power and worry that the Dark Lord might be returning. Alucard takes on his father's power of Dominance, collecting the souls of fallen enemies as he explores the castle. Between himself, and Richter, Dracula and Succubus surely don't stand a chance... but who knows what danger might truly be lurking at the center of the castle, when all is said and done.

Well, okay, we all know because, outside the main characters and their cut scenes, none of the monster locations or boss sprites have changed. Alucard (who is really just a recolor of Soma Cruz, himself the reincarnated spirit of Dracula) battles through all the familiar locations of the game, taking on bosses like Balore, Death, Dracula's recolor of Graham Jones, and Chaos. These beats haven't changed, its just the dialogue and story around them that's different.

In fairness, I actually liked the new sprites that have been stitched over the characters -- Alucard for Soma, Maria for Mina, Succubus for Yoko, Richter for Julius, and Dracula for Graham. the dialogue has been changed, focusing on Dracula's dark gifts and all the people seeking to either control it or destroy it, and the adjustments are strong enough that this does feel like a nice middle entry between Castlevania: Symphony of the Night and the much later set Castlevania: Aria of Sorrow.

While the story is interesting, what holds this hack back is the challenge of it. While the enemies all seem to be in the same places as the original game (barring the occasional Disc Armor that would swear was duplicated into new locations), the amount of damage they've cause to our hero has been ratcheted way up (while the amount of health they have has also been turned up as well). This will lead to a lot of deaths as the hero get clipped by a seemingly glancing blow that deals hundreds of damage, instantly destroying them. 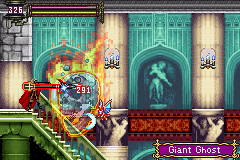 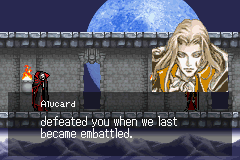 That isn't an exaggeration about the damage; the Bomber Armor, for example, deals 400+ damage when it's first met, while Alucard only has about 300 health. It's ridiculous. And that excessive damage only goes up for bosses. They can exceedingly nasty, easily wiping the hero after a hit or two. Interestingly, I think the damage actually can wrap around past zero and start scaling up again as the last few bosses actually do far less damage than the earlier ones. That might be in part due to the really good armor that can be found, but the damage still seems like it suddenly drops off right near the end.

In the end it leaves the hack feeling really unbalanced. A lot of sections get super irritating, the enemies can take forever to kill, and Alucard's adventure becomes a slog... right up to the end of the game when suddenly it all gets really easy right when you'd expect it to be super hard. It makes no sense. I liked the story the game was telling, but the hack falls apart in other ways, making this a game I'd experience one (with a lot of frustration) and then never again.