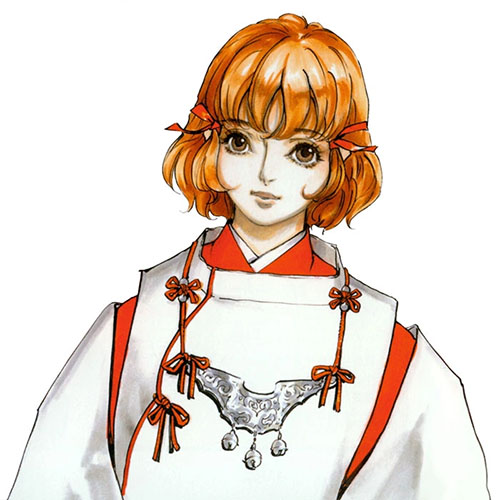 In the span of the franchise, Castlevania: Aria of Sorrow is an interesting game. Although it still plays in the basic genre of the later entries in the series, being a Metroidvania title, it doesn't feature the same kind of quest, or whip wielding hero, as the rest of the series. There's no Dracula to be found for much of the game (for a good reason), and the hero we do get, Soma Cruz, isn't the traditional, raise-from-birth hero.

No, Soma, along with his friend (and focus of this bio), didn't intend to end up at Dracula's castle. Instead it was almost like the castle called to them. Soma's part in the play is explained eventually -- he's potentially the reincarnated soul of Dracula -- but Mina being there is something else altogether. Ostensibly Soma's reason for exploring the castle isn't to defeat a great evil but just to get his friend Mina, and himself, out of the fortress (although, of course, it grows from there). But maybe they were both sucked there because the castle had other plans.

Because, really, when you have a girl named Mina hanging around with a guy that might just be Dracula, there's probably more going on behind the scenes than we really are lead to understand. 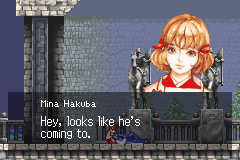 While exploring the Hakuba Shrine, an ancestral landmark for the Hakuba family (who helped seal away Dracula in an eclipse, killing the demon back in 1999 AD), Soma and Mina are sucked into the Eclipse of 2035 AD, getting magically transported into the grounds of Dracula's Castle. They are immediately beset by monsters, which Soma somehow defeats. Strangely he then collects the soul of one of the enemies, and when advised by another people lurking at the castle, Genya Arkiado, Soma realizes he'll have to battle his way into the castle to find some way to escape this treacherous edifice.

Since Mina doesn't have the same ability to collect souls she's left at the gate, the one place in the castle that seems relatively safe. Any time Soma is in the area she provides knowledge and succor (in a way making her a parallel for the Master Librarian, especially once Hammer sets up shop nearby and fulfill the rest of those duties). She remains his steadfast ally throughout his adventure.

When Soma's true nature comes to light, Mina, though frightened at first, accepts this information. Soma, in her eyes, is still Soma, the brave and heroic guy that's been her friend for a while. He support, and acceptance, guide Soma has he battles his way to the center of the castle, all so he can defeat the source of the power and break the curse of Dracula once and for all. And once this this central demonic force, Chaos, is bested, Soma, Mina, and their collected allies flee the castle to watch it crumble from afar. After this, and the events of the day, Mina and Soma come together, a new connection forged between them.

As we alluded to above, there's obviously something to Mina's name. It's no coincidence, we're sure, that Mina Hakuba sounds a lot like the name of the female protagonist from Bram Stoker's Dracula, Mina Murray. She's the object of desire for Dracula in that novel, and here, in Aria of Sorrow, she's the love interest for Dracula by a different name, Soma. That's a pretty nice little parallel. In that way you can kind of think of her as Soma's version of Lisa, except she gets to live.

As Soma explores the castle he'll come across lesser Succubi who will take the shape of Mina to fool Soma. Attacking them, though, reveals their true form. This trickery will come up again later... 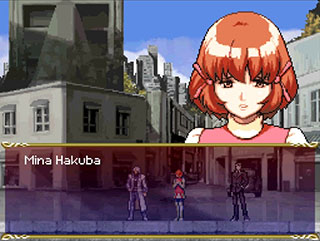 One year after the events at Dracula's castle, Soma and Mina are attacked while on a date. As before, Soma fights off the demons, absorbing a soul from one of the monsters. This hits Soma hard as, up until now, he'd been freed of Dracula's curse, the powers he'd gained on his last adventure wiped away with the defeat of Chaos. He thought it was over. But no, a new fiend, the cult leader Celia Fortner, had built a replica of Dracula's castle all she could harness the power of the Dark Prince and resurrect him. All she needed was the current host, Soma.

Fearing what could happen if Celia gained control of Dracula's power, Soma charged off to her castle. However, he left Mina at home this time to keep her safe. With her love, Soma went off alone to find and stop this cult. As his journey goes on, though, he does receive a letter from Mina, giving him all her best along with her personal talisman as a sign of her love. This he holds dear as a totem to remember her.

Deep in the castle, Soma does eventually confront Celia, but in that encounter Celia seemingly kills a kidnapped Mina. Soma, clutching the talisman tight, realizes the ruse: it was really a doppelganger made to look like Mina, and his girlfriend wasn't really dead. He gets control of himself, instead of giving into his dark power, and finds the balance to move on and fight ever onwards in the name of goodness and justice, eventually battling through to take on Celia and her acolytes and put and end to the cult once and for all.

Of note, if Soma isn't wearing the talisman when he confronts Celia at the pivotal moment, her dark plan succeeds and Soma gives into his dark power, becoming Dracula. This then unlocks a non-continuity, but entirely enjoyable, bonus mode where Julius, Yoko, and Alucard have to join together to take on, and kill, this Soma/Dracula. It's great!

Apparently, before it was canceled, Mina was to make an appearance in Castlevania: Grimoire of Souls as an assist summon. Of course, that game was scrapped before it's last three chapters could be released, so Mina's part in the game was consigned to the dustbins of time.

She does, however, make a cameo in the novel (of questionable continuity) Akumajo Dracula: Kabuchi no Tsuisoukyoku (aka Demon Castle Dracula: Reminiscence of the Divine Abyss or Castlevania: Ricordanza of the Gods Abyss). A fan translation of that novel is available here on The Inverted Dungeon.

Amusingly there is one more instance of a "Mina" in the series. There was a rather silly little gamebook (read "Choose Your Own Adventure" but without that series' license) publishing in Japan titled Devil Castle Dracula: The Battle of Old Castle. In the game, we're introduced to Simon Belmont, the descendant of the original Simon Belmont, who works as an actor. He's been cast to star in the movie "The Battle of Old Castle" portraying his ancestor and opposite him is Lucy Lane who'll be playing the original Simon's girlfriend, Mina. And, yes, during filming Dracula's minions emerge and the player has to help Simon through the castle and save the day.

Obviously, an off-brand "Choose Your Own" released only in Japan and never republished is of questionable continuity (to say the least). It does, however, mark the first instance of the series ever playing with the name "Mina", obviously hearkening, once again, to Bram Stoker's novel. While it was published in 1987, making it one of the first licensed products for the series, it's also reportedly pretty terrible so maybe don't bother trying to track a copy down.