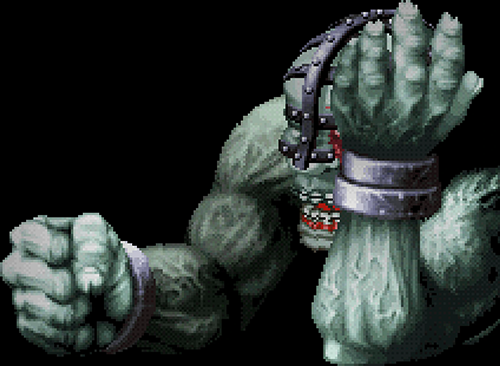 While his origins may not have been commonly known, his introduction into the series in nothing short of iconic. Bats are a common enough enemy in the game, and even since the original Castlevania giant bats have featured as bosses. This eventually led to the creation of the "Bat Company", a collection of bats that could merge together to create a larger boss bat, among other forms. The Bat Company because an iconic boss so, when that beastie appeared in Castlevania: Aria of Sorrow, gamers thought they knew what to expect from the encounter.

But no, instead of a standard bat fight, out came two giant hands, crushing the boss. It was the giant Balore, making his entrance as well as his big statement: you think you know the bosses of this series? Think again! WIth one move, Balore showed that Aria of Sorrow wasn't messing around and we should expect new and different things for this game moving forward. It was an great introduction and, for that game and the twists that were to come, its mission statement was indeed true. 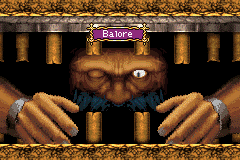 Balor, as he is known in the myths (with Castlevania adding an "e" to the end of his name) was a giant and leader of the Fomorians, a group of evil superhuman beings. His was a nasty piece of work, hulking and mean, with a malignant eye that could cause devastation when opened. He, and his crew of evil giants, wanted to sow chaos and discord across the land, being (as they were) malignant beings.

Balor as a hulking beast with a destructive eye are the parts of his myth that the Castlevania series focused on. He's come out of the wall of a dungeon, flailing his fists about while also unleashed devastating fire from his eye. It is worth noting that the series depicts Balore with two eyes and when he opens the one special eye (or uncovers it with the hand that is blocking its power), it'll unleash his devastation. In the mythology it wasn't clear how many eyes Balor actually had -- one, two, or three, depending on the telling -- but that one magic eye was always the key component.

Also of note, no other reference to Balor's stories -- the hero, Lugh, that eventually defeats the beast, nor Balor's daughter, Ethnea, who would give borth to Lugh and cement Balor's own fate. Those parts of the tale were too much to include in the series, apparently, with not even a "Lugh's Sword" to add a touch of spice to the series. 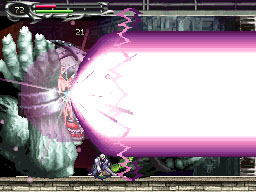 In his first big encounter (after crushing the Bat Company), Balore will appear, swinging his fists around madly from behind his broken prison bars. The fists will move up and down in attempts to colide with the hero, and occasionally they'll swing down (to slam the groun) or across (to punch at the hero). Avoiding these fists can be seriously annoying as they're huge, constantly moving, as seem to habve a larger hit box than they really should. During this phase, Balore's open eye is his only weak point. Once you've hurt him enough he'll close this eye and his hands will go away. Then he'll open his other eye and unleash beam after beam of damage across the floor, causing waves of fire the hero will have to jump over while attacking this second eye. The waves will come faster and faster as this phase wears on but just kep jumping ant attacking and eventually both eyes will die and the battle will be won.

Balore returns in Castlevania: Dawn of Sorrow as the boss that grants you the ability to break the crystal bricks around the castle. He shows you this power by destroying a wall of them with his eye beam when you enter his boss chamber. As before, Balore starts bu trying to punch at the hero although this time around it's made easier by the fact that (a) Balore only has one fist going (instead of two) and (b) the fist is only harmful if you get hit by the punch (you can actually stand on the fist if you land right, safe and sound). Hitting Balore at any place in his head will hurt him, which is much nicer than in his first battle. Occasionally Balore will groan and remove the hand blocking his eye, and then a massive eye beam will get shot out; just duck to avoid this. Balore is an early boss here and all his moves are telegraphed, so just stay loose and be ready and this boss will fall quite quickly.

The giant comes back one more time in Castlevania: Portrait of Ruin as one of the many redone boss fights for the Nest of Evil. He's in his Dawn of Sorrow form here, looking and acting the same as last time (with the same attacks) although now he's facing to the left instead of to the right as before. Also worth noting is that Balore seems to act faster and hit harder than in his first appearance. Still, this isn't a hard boss fight by any means and soon enough you too should have the one-eyes foe felled with little worry.