Castlevania: Aria of Sorrow for Cellphones 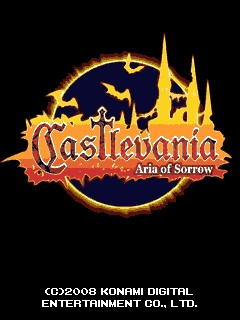 We touched upon Castlevania for cellphones, a series of remakes of the original game designed to be played on these smaller (at the time) devices. The original Castlevania wasn't the only game to get ported, over as a few entries in the series made the move, Aria of Sorrow included. But while the original NES game saw enhanced remakes for mobile devices, Aria's conversion is certainly much more of a downgrade.

The basic cellphone game follows the same basic structure of Aria of Sorrow. Our hero, Soma Cruz is summoned into Castle Dracula on the eve of the eclipse and finds that he has the ability to harness the souls of his enemies. He can use these to gain greater exploration into the castle, which he'll have to do if he ever wants to escape. He'll gain these souls, along with other items, all before reaching the pinnacle and taking out the final boss, Graham Jones.

To the credit of developer Glu Mobile, Inc., the game does look remarkably like the Gameboy Advance version of the game. Not entirely like it mind you, but they did manage to port in many of the art assets, along with the music, of the original game. While the port is compromised in many ways, you do feel like you're playing the original game, just in a smaller form on your (now ancient) cellphone. It's a bit of a marvel considering.

However, while they get points for trying, so much of this version of the game feels half-baked. For starters, while the music of the game made the transition, none of the sound effects did, at all. Soma, his attacks, the monsters, and everything else that should make sound all fails to do so. You can see Soma make an attack against a monster but you neither hear the attacks nor the sound of their deaths. It's a very empty experience, played with a soundtrack that sounds good but still lacking that vital bit of audio to sell it. 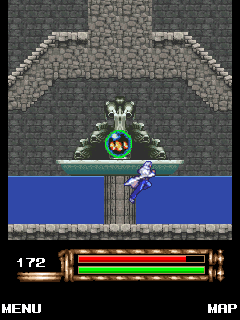 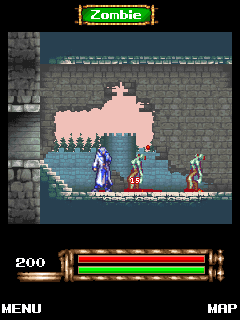 That issue, really, also plagues the graphics. The game does look impressive at first blush, but then you start to notice how fuzzy everything looks, as if its gone through a JPG filter and doesn't look quite right. Along with the fact that the pixel art is off slightly, many of the special effects (jumping in water, for example) are missing. And, all the characters, some included, have greatly reduced animations. When Soma swings his sword, for instance, he goes from standing to the sword extended, and back. All of the fluid motion that made the original game a stunner is missing here.

And then the game is just missing whole sections. Much of the castle is missing, feeling smaller and less substantial. That includes the whole Chaos Realm, the last section of the game that cements the fact that Soma is forsaking the power of Dracula, giving up the power and immortality, so he can be human. Traveling into the Chaos Realm, and defeating the source o the power, completes his arc in this game and is a pivotal moment, and its missing here. After you kill Graham you get a bit of text saying that Soma managed to escape, and that's it. Half a game, barely there.

I get it: this is a cellphone game and some compromises had to made. Glu deserves credit for packing in as much as they did. They got the explorational experience, with a real castle map, item menus, basic inventory, and some souls, Aria is a big game and some compromises had to be made. It just feels like this version is too compromised, missing far too much of its content, to really feel like it earns the name "Aria of Sorrow".

But even if you can handle the fact that this version of the game is substantially shorter you still have to accept that it doesn't play very well. Made for phones of the 2008 era, the controls are really bad. They aren't very responsive at all, with a fair bit of lag between what you tell the game to do and Soma actually reacting. This is only made worse by the fact that the view port for the game has a smaller width than on the Gameboy Advance. The GBA, mind you, didn't have a great resolution, but its even smaller here, and the game play is compromised by it. Enemies have an easier time coming in from off screen and tagging you before you can react. With Soma's slow reacting speed it's even worse, meaning that you take a lot of damage you could easily avoid over on the GBA. 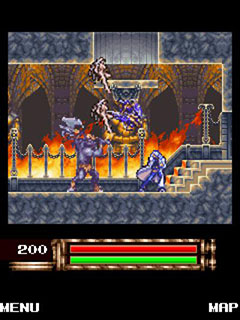 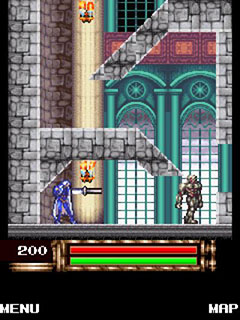 On the whole, this version of the game just isn't up to the standards we should expect, even from a mobile title. Glu really wanted to cram the whole Metroidvania experience in here, but maybe they should have done something different instead. Perhaps the should have taken the idea of Aria but crafted something a little more old-school, more stripped down in some respects but feeling like a more complete game overall. I can't speak to what kind of agreement Glu had with Konami and what kind of liberties they were allowed to take with the game, but s straight (if compromised) port of Aria was the wrong direction to go.

It would have been better for Glu to realize the limitations of the mobile format and gone in a direction better suited for the systems. While they get points for trying, their efforts simply aren't enough to carry the game.