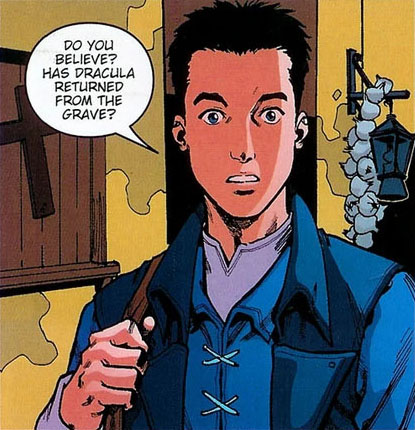 It has to be a given at this point that if someone has any kind of family in a Castlevania title, that family will be used as some kind of bait by the forces of darkness. It's really the standard play of Dracula: find the weakness of some hero and use that against them. Sometimes its kidnapping their loved ones so that the hero is drawn out, put into a place of Dracula's choosing for their battle. Other times, though, he'll kill the loved one and use them as a vampiric vassal to attack the hero.

Such was the fate of poor, young Viktor Totoyan, in Castlevania: The Belmont Legacy. Viktor, the youngest member of the Totoyan Clan, a family who were sworn to aid the Belmonts in their quest in battling the forces of darkness. The family had been made the keepers of the Belmont family whip, the Vampire Killer. it was assumed that one day, when Totoyan grandfather Gaspar passed on he family's charge would pass on to Viktor and his older sister, Pascha. They would oversee the whip for the next generation of vampire hunters.

However, when Dracula returned the Totoyans gathered the whip, as well as their supplies, and went to the Belmont estate to pledge their aid in the coming battle, to aid the Lord of the clan, Christopher Belmont. Young Viktor was left with Christopher's wife, Illyana, but Illyana didn't much like the idea of being left out of the battle. She took Viktor with her as she made her own way into Dracula's lands (even though Viktor thought this was a terrible idea), and she ended up getting Viktor killed. As they climbed their way through the ruins of the land, the ruins fell away, leaving both of them hanging from a cliff. Dracula swooped in, laughed at their plight, and then killed Viktor, tearing out the boy's throat, before stealing Illyana away.

The boy was then sent back to his family, who had regrouped at the Belmont estate upon hearing of Illyana's capture. There the boy attacked, biting his own grandfather after taunting his surviving family. Gasper, saddened, staked the boy, freeing his soul. The young vampire had served his purpose, though, passing on his vampiric curse to another, reducing the viable number of warriors that could eventually fight Dracula. Viktor had been a tool of Dracula's, used well, but it was a sad fate for he boy who had been left behind.