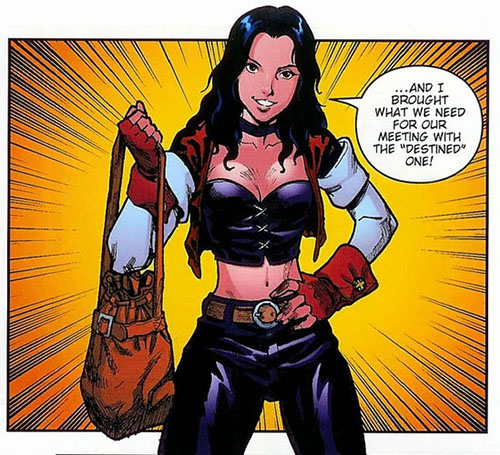 The inclusion of the Totoyan family into the plot of Castlevania: The Belmont Legacy helped to open up new avenue for storytelling. it not only added some explanation for what happened to the Belmont family whip, the Vampire Killer, whenever the evil of Dracula had waned (the Totoyans oversaw the whip as its caretakers), but it also introduced another group of vampire hunters capable of defending the lands of Romania when the evil arose. And that makes sense as you can rely on just one family to defend an entire country all on their own (especially when there was only one whip to share among all of them).

This meant that every member of the Totoyan Clan had to be ready to lend their service to the Belmonts in times of need. Each learned to fight, to kill monsters and fight vampires, to be a warrior in the battle against evil. And they learned to take care of the holy whip, to maintain the magics of the Vampire Killer and keep it at the ready when the Belmonts called for it. Each member learned this and it was their duty, passed from generation to generation, sworn and sacred to the whole of the Clan.

With her grandfather getting up in years, one had to assume that Pascha knew that it would one day be her duty to take care of the whip, as he had been doing for decades. She just never assumed that duty would be thrust upon her so quickly...

Although Pascha's grandfather, Gaspar, was the leader of their family, the eldest living member of the clan, Pascha had been training to one day take over the clan, and follow its sacred duty in protecting the Belmont family whip, the Vampire Killer. When Gaspar felt the presence of Dracula's evil, Pascha knew what to do. She packed up the whip, grabbed her own weapons, and stood ready to go with her grandfather into the Belmont lands. There they, accompanied by younger grandson Viktor, pledges their serve to he Belmonts as the head of that clan, Christopher Belmont, readied to go into Dracula's lands and defeat the demon.

While Pascha and her grandfather went into Dracula's lands, joining the group of men Christopher had already gathered, the younger Viktor was told to stay behind for his own safety. Left in the charge of Christopher's wife, Illyana, it was assumed that Viktor would be safe while the adults went off to fight evil. Unfortunately, Dracula knew exactly how to demoralize people, striking at their weaknesses, so while Pascha and the rest of the group were out in Dracula's lands, Dracula visited Illyana, stealing he away after killing young Viktor, turning the lad into a vampire.

After learning of Illyana's capture, Christopher and his band went back to the Belmont estate to regroup. There Gaspar and Pascha were confronted by the horrible sight of young Viktor, now a vampire. Gaspar pushed Pascha and the rest of the men away while he confronted his undead grandson, saddened by what he saw. He let the boy bite him so he could get close, staking Viktor and freeing his soul. However, instead of then staking himself he realized that he felt connected to Dracula, that the magic of the master vampire was shared. Using this, he was able to lead the band back into Dracula's lands, heading to the secret crypt where Illyana was being kept by the vampire.

Sadly at this point 'aspar then turned and, as his only kin left, it fell to Pascha to kill her grandfather, staking him to free his soul from the tainted body. This pained her greatly, but her grandfather had done his duty, aiding the Belmonts one last time by leading them to Dracula, ensuring the vampires defeat in this time. Realizing that duty now fell to her, Pascha assisted in freeing Christopher's wife while the vampire hunter killed his undead foe.

Six months later, Pascha was living with the Belmonts, having been accepted as their ward and new member of the family. She joined them in the celebrations of family life, a living in member that could oversee the magic of the whip in case, once again, Dracula ever returned.