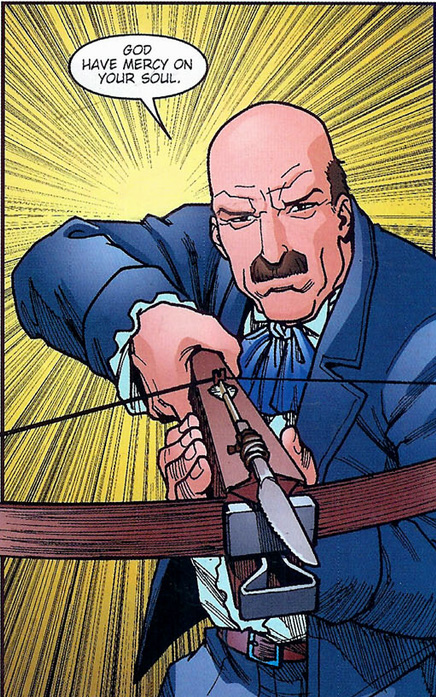 Depending on the era you follow the Belmont family, they're either in exile or accepted parts of the Romanian nobility but what is clear is that they are of the nobility. Coming from a long line of knights and heroes, the power and influence of the family grew over the years, making their clan one of he key families of Romania for several centuries. That kind of power implies wealth and status (especially when they weren't in exile), an while the Belmonts have never been associated with a life of comfort, always training for the next vampiric incursion, one has to assume they had lands and deeds and titles, power and money, and an estate to go along with it.

An estate means duties to crown and country, as well as to the people living on their lands and working their fields. Servants, too, would be required, people to assist the noble family with these duties. Each of the noble members of the family would presumably have their own assistant or valet and, in the case of Deimos, he was the loyal servant of Christophe Belmont (at least in one version of the history). Having watched his charge grown from a young age, loyal Deimos was there, through thick and thin, to assist his master in all things... including hunting vampires.

Having been with his young charge for years, Deimos got to watch Lord Christopher Belmont grow into a strong and proud man, the leader of the Belmont family and its estates once Christopher's parents passed on. This left Christopher in charge of all things, with loyal Deimos by his side to provide assistance as needed. And Deimos got to watch on, with pride as a father would, as Christopher married his lady fare, the beautiful and strong-willed Illyana Riktor.

The happiness of the new couple, though, was shattered when evil forces aligned to resurrect the Dark Lord Dracula. It had been 100 years since Dracula had last terrorized the lands and his story had faded to mythology, a terror to tell children. But when an evil force attacked the Belmont family crypt, Deimos and Christopher knew one one thing could have had to gall, and the strength, to perform that awful feat: the Dark Prince himself.

Knowing what was in store for Christopher, Deimos suited up, grabbing his gear to ready for battle, the two, along with a small cadre of warriors, went to Dracula's lands to fight the demon. What they found were other undead but not, initially, the vampire lord himself. Unfortunately for Christopher, Dracula was off elsewhere, stalking the Belmont's new bride, capturing her and dragging her to his secret crypt. The cadre was forced to regroup, to follow a new trail all so they could battle their way back into Dracula's lands and find where Illyana was hidden.