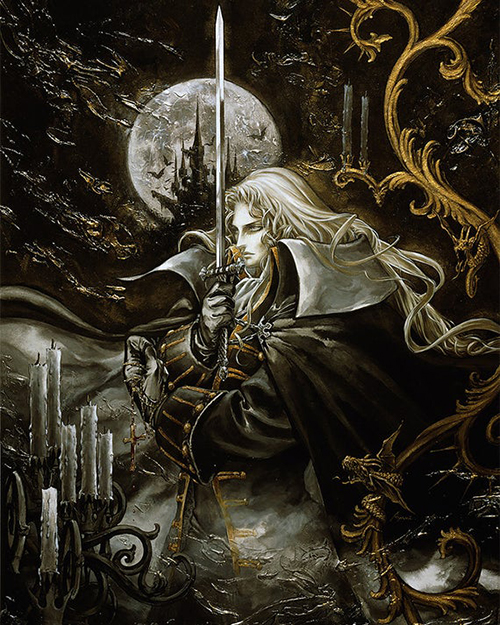 In the five years since Richter Belmont defeated Dracula, the lands had sat uneasy. Things had been quiet, but a sense of impending dread hung still, as if Dracula's curse was still present. Richter Belmont went missing one day, and then, some time later Dracula's castle appeared. Thinking the two events might have been connected, Maria Renard (unlockable hero from the first game) went to investigate the castle and see what was going on.

But another hero appeared at the castle as well. Alucard, Dracula's son and another sworn protector of the humans, woke from his sleep, feeling the disturbance in the balance between good and evil. Taking matters into his own hands, Alucard ventured to the castle to find out if his father had returned (and, if that were the case, to kill him again).

Inside the castle, Alucard encountered the Grim Reaper, who warned the vampire not to go into the castle and get in the way of his father's resurrection. Alucard ignored the warnings, instead venturing further in. There, he met Richter, who seemed to be working for Dracula.

Maria and Alucard ran into each other on several occasion as well, with Maria giving out advice and assistance. It is with Maria's help that Alucard was able to free Richter of Dracula's minion, (just talkin' 'bout) Shaft, who had been controlling Richter all along. Alucard sent Richter and Maria home while he ventured further into the castle, into an inverted duplicate hovering in the clouds above the main castle (a part of Shaft's magic).

As the vampire's son proceeded through the castle, he collected relics, part of his father's body that Simon once collected 100 years before. These relics granted Alucard access to the final confrontation against Shaft and, finally, Dracula. Facing off with his father, Alucard demanded to know why Dracula wanted to destroy the humans and rule the world. Dracula blamed the humans for his wife's death (Elizabeth, also the mother of Alucard), and was looking for "justified" revenge.

When Alucard bested Dracula, father and son shared one last moment lamenting the loss of Elizabeth, and Alucard commented that Dracula had lost his soul when he lost the ability to love (and was unable to forgive the humans). Dracula begged for his dead wife's forgiveness as he disappeared into the void.

Standing outside the castle, Alucard declared that he must leave, he had to go back to sleep to keep his father's evil bloodline off the Earth. Richter and Maria share a small moment before Maria went off in pursuit of Alucard, feeling love for the tortured vampire. Their fate is unknown.

Well, when we say their fate was not known, that's not entirely true. A Japan-only radio drama produced by Konami, Akumajo Dracula X: Tsuioku no Yasoukyoku (loosely translated as Castlevania: Nocturne of Recollection), follows Mari and Alucard as they set up shop and live in Aljiba together. While we at the Inverted Dungeon do not understand the Japanese language, and are thus unable to properly discuss the relative merits of the actual radio drama, what we have read about the story lead us to believe that the plot and writing were up to Konami's more recent standards. In other words, the story was kind of confused and not all that great.

While the radio drama was created by Konami, it never saw a release outside of Japan. It also doesn't show up on most timelines for the original series. It's place in continuity is thus nebulous, but we can probably fairly assume it's not an official part of cannon.

Symphony of the Night was ported to the Sega Saturn, in Japan, under the name Nocturne in the Moonlight. It sported two extra areas for the heroes to explore, but neither of the new areas were all that impressive, nor was the port all that good.

It was later also included in The Dracula X Chronicles as an Easter Egg. In both of these versions, Maria and Richter are both playable, although their adventures in the castle are not considered cannon. Richter is the only bonus character playable in the original PlayStation release of the game. The inclusion of the two characters, though, does give the game a stronger connection to its predecessor, Rondo of Blood.