Part of the Dracula X Chronicles 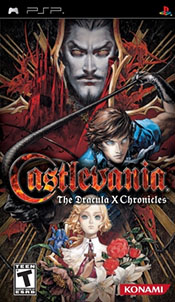 Editor's Note: This review is for the Symphony of the Night portion of Castlevania: The Dracula X Chronicles. For a discussion of the main part of that game, please refer to its review.

In some ways, the inclusion of Symphony of the Night in the Dracula X Chronicles is largely unnecessary. Symphony had a wide release in America (including a "Greatest Hits" re-release), and has since come out as a digital download on the XBox 360 (largely emulation-perfect). Everyone that wanted a copy already has one, and it's not as if the Dracula X Chronicles needed another selling point: it was the first American release of Castlevania Dracula X: Rondo of Blood. Every Castlevania fan was already planning to buy it.

Of course, the package is called Chronicles, so the thought would be to include Symphony to make a complete "chronicle" of the Dracula X saga (but then, as the editors of the Inverted Dungeon have pointed out, a complete chronicle of the saga would have included the, admittedly largely reviled, SNES Castlevania: Dracula X, but that's a different discussion). Whatever the motives, Symphony is included in the package, and there are enough little perks put in to warrant a second look-see and review.

Symphony Chronicles is a faithful port of the the original game. Everything is just about as you remembered it, with only minor modifications. For one, voice overs have been redone to better match the voice actors in the new translation for Chronicles Rondo. This is a nice point of consistency for the package, and while some long-time fans may notice the difference (it had to be pointed it out to me, and I love the series), for anyone going from one game to the next in the Dracula X Chronicles package, this is a bonus, not a knock against.

Fans of the original Symphony of the Night that wanted to have the missing relics from the Japanese version will be happy to know that the missing familiars have been included... as worthless as they are. The Pixie (Sprite) and Tengu Goblin (Nose Demon), who were parodies of famous Japanese people (but who are totally unknown to American audiences), were included in this new edition. That said, the Pixie plays the same as the Fairy (who was in the American release), and the Nose Demon is the same as the Devil, and since all four of those familiars are in this new release, the inclusion of the two additional familiars is just for completists. I, personally, don't really care one way or the other about them.

The biggest addition for Symphony Chronicles is the inclusion of Maria Renard as a playable character. To note, she plays differently than in her appearance in the Saturn port of Nocturne in the Moonlight, hewing closer to her appearance and skill set in Rondo. Those that have played the Saturn port may be disappointed in her tweaks (a relative lack of power by comparison), but for consistency across the games in the package, it makes sense.

The only slight against this version of Symphony, and it's a minor one, is that the game doesn't include the two bonus areas from the Saturn port. It's not a big deal, as those two stages are largely worthless and the Saturn port is generally reviled by fans. It's just odd to not have them included in as "complete" a package as Chronicles Symphony puts forth.

Thankfully, in all other respects, this game succeeds in delivering the full experience. It runs just as you'd hope (which it should since this is a port from one PlayStation system to a better PlayStation system). Fans will delight in a complete experience, and new players will find yet another great game included in this fabulous package. If it wasn't already clear, if you have a chance, buy Castlevania: The Dracula X Chronicles. The inclusion of a great remake of Rondo is reason enough (plus the original version of that game), but having a fantastic port of Symphony of the Night is just icing on the cake.

Interestingly, the Chronicles port of Symphony of the Night has become Konami's "official" version of the game. We say this because two later editions of the title, one as part of Castlevania Requiem (which also included Rondo of Blood) and a later edition for cellphones, are both based on the PSP version of the game from The Dracula X Chronicles. In the case of the cellphone edition, on-screen controls were added to the game, although the option is also included to play it with a connected controller. Otherwise, in all obvious respects, these ports are the same as the PSP edition.

In other words, if you want this edition of the game, with its changes and improvements, you have options as to just how to get it: PSP, PS4, and cellphones.