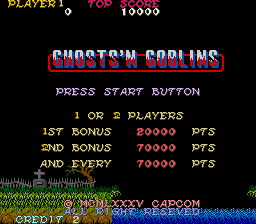 The early days of video games were dominated not by home consoles but by arcade machines, and the needs of Arcades were very different from those of the later home users. For most kids growing up in the 1980s, the desire from a video game was to play through an adventure, whether it was taking Simon Belmont to face off against Dracula at the top of the villains castle, defeating Bowser with Mario so you could save Princess Peach, or leading the blue team to the Super Bowl. A finite end, at a certain point, was expected.

Arcades, though, worked on a different goal: to suck as much money out of players as they could. A lot of early arcade games, like the Donkey Kong titles, Galagas and Galaxians and all the rest went this route, not giving a finite ending so much as an endless experience (with the occasional milestone thrown in) to keep the users pumping in quarters over and over. If they died and game overed, well, they'd just pump in another quarters and start the adventure over again to try and rack up a higher score. Whether the game had an end screen or not was less consequential than how many quarters the game could rip out of gamers grubby hands.

The Capcom series of arcade adventures starting with Ghosts 'n Goblins typified that. These games were marked with a brutal difficulty level that challenged players, punished them even, just for having the gall to play the game. The reason, of course, was that if the player died regularly (every three minutes or so), then they'd pop in another quarter to see if they could get a little further the next time. When the screen said "Continue?" it wasn't an offer, it was a challenge.

Ghosts 'n Goblins (titled Makaimura in Japan, translated as "Demon World Village") is an early platformer, predating the classic Castlevania by a year. Some of its DNA is probably in Konami's later adventure, which came out the next year, but it was certainly designed in answer to Donkey Kong, it's sequels, and the host of clones that followed. Heck, Ghosts 'n Goblins is only half of a platformer, with the other half being a shooter, another Arcade standard. The hero, Arthur, runs from one end of the game to the other, collecting power-ups that change his weapon, allowing him to shoot different short-ranged attacks at enemies. In that way it probably also inspired another Konami property in the process: Contra. 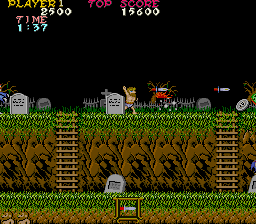 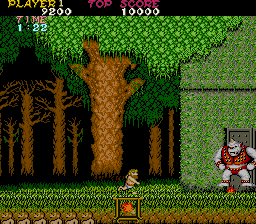 There are those that describe Ghosts 'n Goblins as fun, although not everyone has that opinion of the game (several editors for the Inverted Dungeon included). The game does feature a fun mix of graphics and music, with a catchy, instantly recognizable soundtrack. It's mechanics are fairly easy to get ahold of, with Arthur bouncing between platforms, shooting his little weapons, taking out enemies. On their own, this is all pretty standard for the genres the game touches upon and the game handles it nicely, acting very responsive in the Arcade original.

But it's the difficulty that gets the player, as it's absolutely brutal. Ghosts 'n Goblins may have heard about things like "balance" and "fairness" but it doesn't care about them at all. It will smear the screen with enemies, laughing at the idea of shooting yet one more ghost to fly at you without any way for you to hit it, or put a powerful sub-boss right in your path that can shrug off your damage and hit you, reducing you from an armored knight to a dude in his boxers or, if you're already in your skivvies, killing you instead. Two hits and you're dead, with only the occasional replacement armor to save you. It's a brutal prospect in a game perfectly balanced to kill you every other step.

I remember playing this game as a kind and only ever making past the first stage once. Even now I'm hardly good enough to get through the NES version of the game, a pitch-perfect port of the Arcade original, for better or worse. The lack of quarters to steal from players didn't stop Capcom from keeping the difficulty of the original title just as brutally high on home consoles (Atari ST, Amiga, and MSX computers included). Every edition is rough and tumble, an almost unfair affair meant to try the patience of players. But some players enjoyed the hell out of it, leading Capcom simply to double down in all later sequels in the series. You want to play Ghosts 'n Goblins? Then you better earn it, kid.

From it's lone hero adventuring across a Gothic terrain littered with demons, devils, ghosts, and goblins, Ghosts 'n Goblins is obvious inspiration for Castlevania. You can see it in the way the hero collects various weapons he can throw (a precursor to Simon's own sub-weapons), and the way the game makes you strategize when to take attacks, when the jump for that next platform, when to push forward instead of waiting for the next attack.

Plus, as in the later Castlevania, Arthur adventures along a mapped out path, with each stage flowing into the next along a little mini-map you see between stages, just like with Simon's home console adventure. This was a trick Capcom also used in another of their adventure, Trojan, released the next year after Ghosts 'n Goblins. Konami, arguably, just took this inspiration and ran with it. 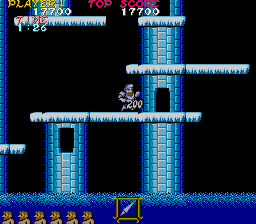 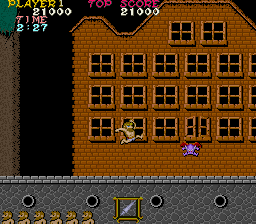 Of course, the key difference between Castlevania and Ghosts 'n Goblins rests in their difficulty. Where Capcom's title is punishingly, maddeningly hard, Konami had the sense to actually make their game fair. With a title in gamers' hands, where they could play it over and over again for a single flat fee, the goal was no longer to strip quarters out of gamers hands. Instead, Konami crafted an experience that, while difficult, was still just fair enough to keep gamers coming back for the thrill of exploration. Capcom, didn't change anything in their conversion of Ghosts 'n Goblins to smaller screens, but Konami knew better.

In Castlevania, despite the short nature of the adventure (only six stages), the difficulty ramps slowly, letting you into the game's secrets to you can edge a little further each time. Hell, in the Japanese edition of the game, released on the Famicom Disc System, you could even save your progress between stages, something you feel Ghosts 'n Goblins would laugh at. "You want to be able to save?" it says, with scorn, "Just for that we'll make you replay the game just to see the true ending! Oh, wait, we already do..."

If anything, it's the later Arcade game in the Castlevania series, Haunted Castle, that feels the most inspired by Ghosts 'n Goblins as that game, like Capcom's opus, featured ratcheted up difficulty mixed in with the Gothic-inspired setting and monsters. Konami drew a lot of inspiration from Capcom's series, indeed.