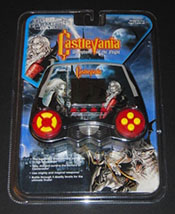 Oh, Tiger Electronics. One has to imagine that, back in the day, Tiger thought they were doing good work. There were kids that couldn't afford handheld consoles, like the Game Boy, so Tiger elected to create cheap games for an under-served market. It's the only explanation I can come up with for why Tiger kept making games and why people kept them in business -- someone had to be buying their crapware, right?

And, believe it, their games were absolute crap. We already covered the Tiger "version" of Castlevania II: Simon's Quest, a game so terrible ever the seven-year-old version of this reviewer put it down in disgust in minutes (and that kid had no taste). It should be no surprise, then, that the Tiger iteration of Symphony of the Night was just as bad, just as cheap, as their first effort with the Castlevania series.

Like their previous effort, Tiger seems to have done very little to translate Symphony of the Night to the lowest of low-end hardware. Gone is just about everything from the original game -- leveling, switchable weaponry, much of anything to look at. Instead we're treated to one hallway (the one printed across the back of the system), and a series of enemies Alucard comes across while he's running forward. Honestly, in all but name the game feels exactly like the Tiger edition of Castlevania II -- it wouldn't surprise this reviewer to find out that the games shared the same engine (if what Tiger created could charitably be described as having "an engine").

This game is, without a doubt, shitty. It's made shittier by comparison to the game is supposed to be created from (Alucard's real adventure), but even without a bad comparison there would be no reason anyone should go near this handheld. It's just so bad.

Surprisingly this little handheld wasn't Tiger's only attempt at a remake of Symphony. In 1997 the company released their Game.com system and, since they had the license for Symphony, an effort was made to port the game over to the Game.com. 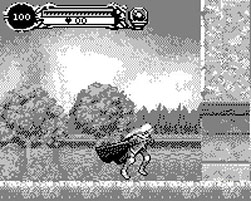 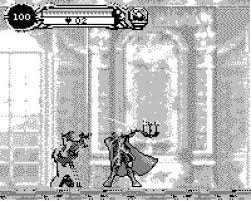 What's truly surprising, though, is that they seemed to have been doing a good job with the project. Whereas their cheap-o handheld retained nothing of the original material, the Game.com version seemed like a fairly faithful port. Although the screen-grabs we could find don't do it justice, the game flowed and moved like Symphony with all the nice graphical effects we expect from a proper port of the game (including the after-images of Alucard as he moves and the little sparkles when his meters fill up). Despite the black-and-white graphics (a requirement for handhelds of that era, really), this was a true port of Symphony.

Sadly, the Game.com itself never became a big seller -- under-performing every year of its release, the unit was quickly shuffled out of history three years after its release. Games like Symphony that were started at one point were eventually scrapped, probably due to development costs. Which is sad, really, because a game like Symphony could have been a system seller. Sadly, the remake was canceled, never to make the light of day (except for a few random videos Online).