Castlevania Puzzle: Encore of the Night 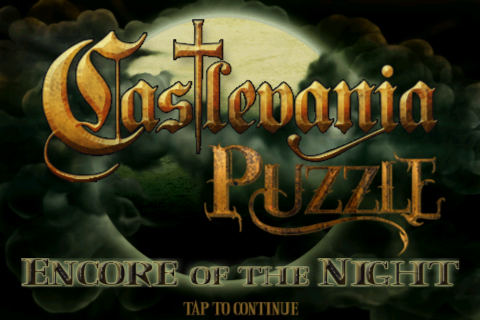 In the pantheon of Castlevania: Symphony of the Night remakes, Castlevania Puzzle: Encore of the Night certainly is the strangest. In fact calling it a remake is a bit of a misnomer because, which it wears the skin of Symphony, Puzzle is a very different kind of game. It sits in a genre somewhere between Puyo Pop and Puzzle Fighter far removed from the Adventure-RPG hybrid of the original title.

In Castlevania Puzzle you play as Alucard, hero of the original title, as he goes through the same quest as before. Namely, Richter Belmont is missing and the tide of evil is turning on the world. As Alucard you have to explore through Castle Dracula, fighting enemies and bosses while collecting items to unlock further depths into the castle, all so you can free Richter of the curse that's been laid upon him and, eventually take on Dracula in a bid to save the world. Sounds pretty normal so far.

The trick of it is that instead of your usual Castlevania action -- running and jumping and attacking monsters with your swords -- your battles take place in a puzzle arena. This is where the "Puzzle" part of the title comes in as each room of Dracula's castle requires Alucard to fight a monster, be it zombies or armors or anything else you're used to. The battle is a one-on-one, Puyo Pop-style match with the opponents (you and the monster you're fighting) dropping pairs of colored blocks down the usual puzzle shaft so they can be matched up in combos. Connect three or more of the same color and they'll explode, droppthe other blocks down further, allowing for even more explosions.

Obviously the trick is to build bigger and bigger combo-drops so that you can get the upperhand on your opponents. This factors in two ways, either by filling their side with a bunch of junk blocks (for dishing out solid combos) or dealing a bunch of damage for clearing as many blocks as you can. This is one of the twists fellow Puyo enthusiasts may find odd: you don't have to fill the other side's puzzle-shaft to kill them. The battle is broken up into rounds (a timer that slowly empties then rotates around), and at the end of each round both sides attack the other for a bit of damage. Deal enough damage to your foe (before they deal more to you) and you win the round. Play well and, one way or another, you'll make it through the fight. 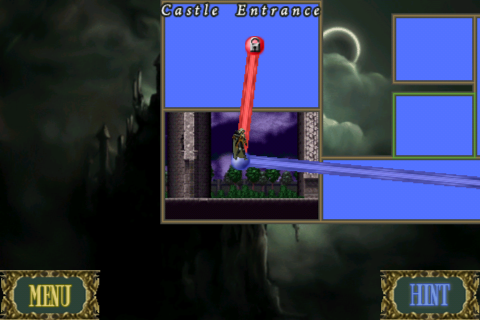 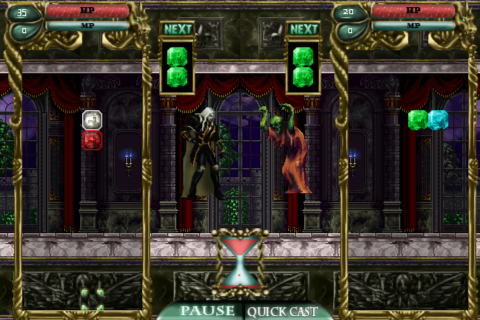 It's an interesting concept, pairing up puzzle playing with direct combat (even if you don't really control what Alucard does, just the puzzle blocks in your well). One of the big issues I had with Castlevania Puzzle, though, was that it has seriously terrible controls. Because this was made in the early days of decent cellphone games, past the point where everything has to be done on the numpad of a Nokia cellphone, but still a bit before game makers figured out the right way to control games, the controls for Castlevania Puzzle are pretty janky.

There's no on-screen prompt of where to put your fingers and everything is touch-based -- hit here to move left, hit there to move right, double-tap to drop the bricks. In theory the controls are simple enough to just work, but in practice they never work as well as they should. Sometimes I'd lightly tap the screen once and it'd think the brick should drop. Other times I'd touch the screen and nothing would happen. I'm sure much of that is just user error but if there were sections nicely marked out on the HUD to indicate "put your digits here, idiot" my play experience would have been a whole lot smoother.

Also, frankly, the layout of the game isn't that interesting. You get to explore the castle you remember from Symphony bouncing through all the familiar hallways and coridoors, but the game is stil, honestly, a pretty linear affair. Need to get here? Find a key item. Want to get up here, find the ability to fly. Once you get there you'll gain some other items to help you further and progress deeper into the castle. It has the illusion of being non-linear when it's really a pretty straight shot from start to finish. True, the same could have been said about Symphony, but that game had enough artistic flourishes and weird diversions to make you forget the basic linearity of the experience.

This version, though, doesn't benefit from such diversions. Each hallway or room is one piece -- fight the battle there then move on. All the weird little bits and fun strange things you could do to pass the time as you ventured back and forth across Castle Dracula are missing here so you just get to slog your way back and forth, over and over, to full explore the whole game. The construction, then leaves a bit to be desired. 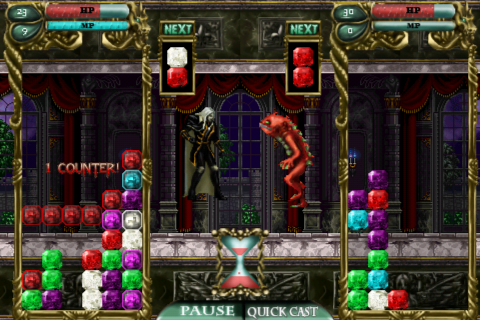 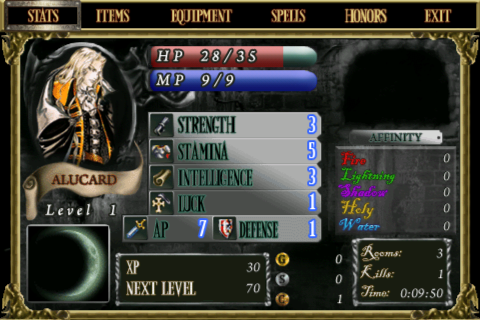 The game does look and sound great, which is a plus in its favor. Of course it achieves this by reusing all the assets from Symphony of the Night, from the music to the titlesets and all the characters. Some of the art is new, like Alucard, Richter, and the varions bosses all having newly redone artwork. There are also very nice portaits done for the main characters to really highlight the anime art of the title. For the most part, though, this game looks and sounds like Symphony -- that's great but it's not that new.

Of course, the worst part of the game is that, for many of us, trying to find a way to play it is very difficult. Officially it only came out on iPhones and Windows Phones (and no one even uses Windows Phone anymore). I was able to conjole a family member with an iPhone into letting me borrow their phone for a few hours so I could play this game for the review, but that was because I had an Android phone (always have) and, even now, the game isn't available for that system. It's been ten years (as of the time of this writing) so I doubt it ever will be. Heck, I played this game a while ago and only now got around to writing about it -- there's a chance the game isn't even available anymore for most phone users.

In the end, then, this is just an oddity; something fun to discuss but not a game anyone would seriously play for hours at a time. After a few rounds of the game I was already bored with its mechanics, having seen all I wanted to see, and I'm a hardcore Castlevania fan. If I'm bored after a few short hours what are the normal players who aren't invested in this series going to think. THe game is amusing but it's not that amusing. Not at all.