Castlevania: Nocturne in the Moonlight 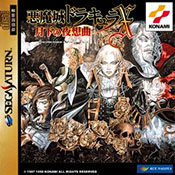 When Castlevania: Symphony of the Night was released in the States, it underwent a few changes for American audiences. There was the expected translation from Japanese to English, but also a couple of "important" items were removed (although they were rather duplicative of items left in the game), and certain features that were probably planned for both releases (US and Japan) were scrapped.

In Japan, some of these issues were "corrected" with a Saturn port of Symphony. Referred to as Nocturne in the Moonlight in the States (Nocturne in the Moonlight is actually the name for Symphony in Japan -- calling the Saturn port Nocturne is an easy way for American audiences to differentiate the two), the Sega Saturn ports adds in a bonus playable character, two new areas to explore, and (since it was a Japanese-only release) the items that were removed from the American release were left in. Unfortunately, the Saturn port has some serious issues, preventing this "enhanced" edition from being the definiative release of the game.

Nocturne, by and large, plays like the original Symphony. You are Alucard, tasked with venturing through your father's castle, besting monsters, collecting items and powers, and becoming god-like on your quest to rid the world of Dracula's evil. You'll have to venture through two versions of the castle, finding all the important relics to unlock your way, and interacting with Maria Renard and Richter Belmont (heroes of Castlevania Dracula X: Rondo of Blood). Along with Alucard's quest, Richter's quest is once again included, as is a new quest for Maria. Both of these bonus modes are now available from the start, so you don't have to unlock them by playing through once as Alucard (for those that have already played the game on the PSX, this is a welcome addition -- not that playing through as Alucard is some kind of hardship). 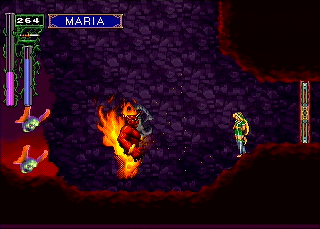 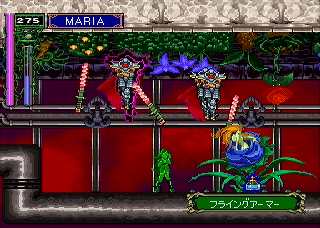 The inclusion of Maria as a playable character also allowed the designers to include her as a "boss" in the main game. Originally, Alucard would have some interactions with the girl, and she'd eventually aid him in the quest. Here, before she helps him, she battles him (ahh, to be in love and try to kill each other). It's an interesting addition, but no matter what, Maria is a bit flawed. While her attacks are plenty strong -- she's kinda ninja like, attacking with fists and kicks, as well as her animal powers -- her sprites are less impressive. She's not much to look at during the game due to a lack of animation frames, and while she's powerful, her awful design detracts from an otherwise fun mode (her inclusion feels rushed, even in a port of a game from the previous year).

Interestingly, Richter has a bonus, hidden costume. It too is awful to look at, making one wonder if the artists they had on staff knew what they were doing. There's a certain slap-dash attitude to the new artwork for the game that speaks more to getting features in that can be boasted about than actually trying to do things properly.

This lack of attention to detail permeates the new areas included in the game. Of the two, the "Cursed Prison" is little more than a couple of connecting hallways between the Marble Gallery and the Underground Cavern sections -- it doesn't even have a boss. Those looking for a shortcut between the two areas will probably appreciate its inclusion, but to call it a full-fledged area oversells its importance. 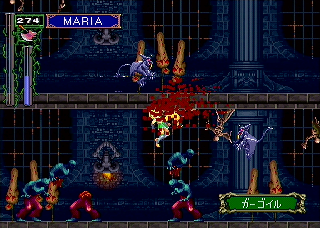 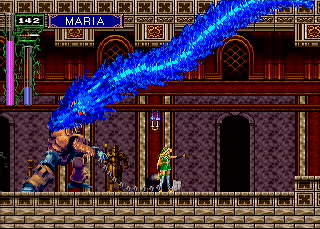 The other section, the "Underground Gardens" started life (in the original Symphony of the Night) as a glitched area that lead to what was probably the remnants of an abandoned level that couldn't be completed before the game had to be shipped -- the only way to get in was to glitch Richter in the opening areas, not that there was much to see. Now a section has been completed/added in place of the glitch. As with the Cursed Prison, though, it's not much to speak of -- a couple of long hallways, a few new enemies, and a life-meter increase. There aren't any truly important items to be found, and while it does at least have a boss (the Skull Wraith), there's little to speak of here.

While the inclusion of new features is great, the game is horribly hobbled otherwise. The Sega Saturn was a great system for 2D gaming. Unfortunately, the origjnal Symphony was a 2D game running on a 3D engine -- that's why the game could have so many interesting effects and details, since the engine was designed to allow for those graphical flourishes. For Nocturne, instead of making a custom engine to work with the strengths of the Saturn, Symphony was simply ported over, 3D engine and all. In some places, the nice graphical effects were swapped out for less impressive graphics (such as the candles having a translucent effect being swapped out with dithered sprites). Other times, such as in the case of larger enemies with sprites that rotated, the effect was left in resulting in the Saturn choking on the effects, and the frame rate dropping -- even in Save Rooms.

Worse still was that the game suffered from drastically long load times. The original Symphony had loading rooms to compensate for the hero transitioning to new areas -- you walk through the load room, and by the time you exit, the new section should be read. The Saturn, though, was trying to cope with a port of another engine, an engine it wasn't happy with at all, and so while the load rooms are still in there, even after you make it through the room you'll normally be treated to extra load times while the game works to catch up. 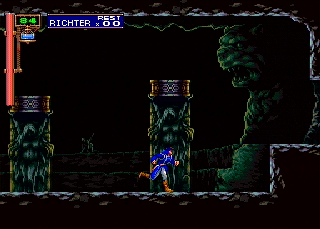 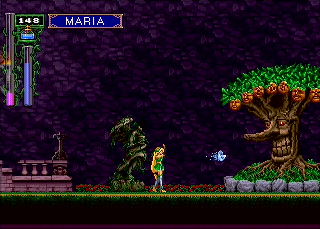 Lastly, the resolution of the Sega Saturn was different than the Sony PlayStation. To compensate, the designers simply stretched the screen to match. However, the screen stretch left sprites looking squished in the other direction. As a result, the game compensates by squishing stuff back. All the sprites in the game look "stubbier" than their Playstation counterparts, and with all the stretching and compressing, everything looks more blurry and less polished.

I suppose the purists would say that this game has more features than the PSX version, so in theory it should be better, but it just doesn't play better. It feels slap-dash, rushed. If I had to pick between the extra features and the original game's polish and dedication to quality, I'd still go for quality.

The squished resolution, the bad character animations (Richter's new outfit and Maria's sprites), the dithering effects used instead of translucency, the blurriness of the sprites and tiles due to scaling, and the lower color palette, compromise what was originally a gorgeous game. 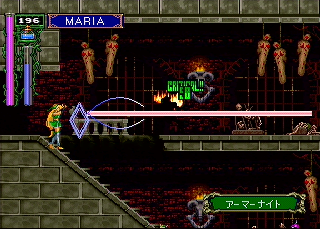 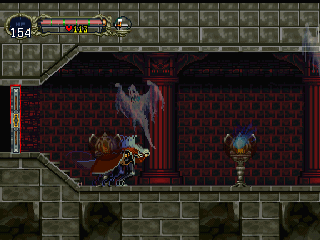 All the sound effects sound more "compressed" than usual, like in a lower quality microphone. The background music sounds like it got recompressed as well. While the included new tracks are interesting at best, they certainly don't compensate for their seemingly lower bitrate. An included jazz version of "Vampire Killer" is kinda cool, but not worth the price of admission on its own.

The gameplay is the same as the original -- that is, if you were to slow it down to 3/4 speed. Otherwise, it's largely a carbon copy of the original Symphony. Maria's quest is as pointless as Richter's was (in either version), and gets old rather fast. It's just another pointless side character wandering about in the castle. However, her included triple jump does explain how she went all the way around the castle to meet Alucard in the Chapel in their third encounter in the game. 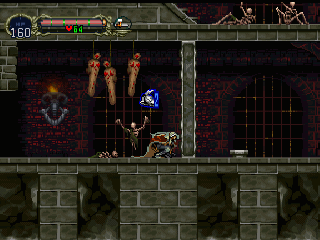 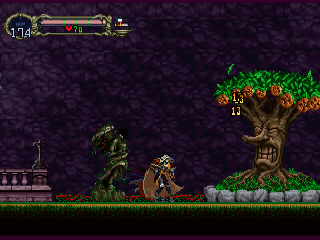 The lack of effects isn't a problem. The fact that the few effects that do exist slow down the system to a snail's crawl, however, is a major issue. You can't be in the "Royal Chapel" or the "Castle Keep" for too long before you notice you're playing the game as if someone put a huge strobe light behind you. Also, for whatever reason, Alucard has an additional "third hand" on the controller layout (yeah, it's in the menu -- Alucard has three hands). It's very odd. Especially odd because they could've used the button for the map. In the Saturn Version, you have to pause the game in order to enter the map. And pausing the game causes a slight loading, and loading the map causes more loading. All this loading is easily the most irritating thing in the game (and this isn't counting the loading between stages). Heaven forbid if I missed a spot on the map and had to keep reloading to search for it!

This is what makes the gameplay a bad experience overall. Seriously folks, stick to the PlayStation Symphony. Play this version if someone hands you a free disc and a Saturn, and only so you know what you're missing. It's no Rondo in terms of rarity, and it's no Symphony in terms of quality. The good, by far, does not outweigh the bad.