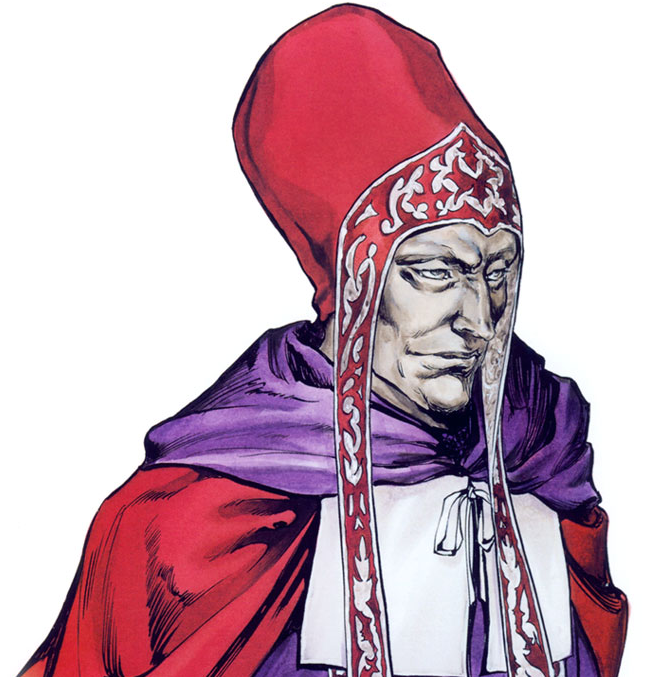 Although we all like to make fun of his name, since his single-word moniker is shared with a private detective in 70s Blaxploitation (just talkin' 'bout Shaft), Dracula's primary sorcerer and lead agent for teo games is more than just a simple joke. Introduced as a new minion for the hero to fight in Castlevania Dracula X: Rondo of Blood, Shaft's character would go on to define the storyline of an entire era of Castlevania. In the past, Death or Carmilla would be Dracula top lieutenant, arranging the Dark Prince's resurrection and working to stymie the heroes long enough for Dracula to regain his full strength.

But then we got a new villain, someone that seemed to be able to cheat death (and Death) a live beyond his mortal body. One who could take over minds and control heroes all while working behind the scenes to bring back Dracula time and again. He was a powerful sorcerer, and his name was Shaft.

Also, it's really funny to snicker at his name. I mean, I hear that Shaft is one bad mother-

A powerful sorcerer and practicioner of the dark arts, Shaft made a name for himself for his power and his evil. Considering his abilities, his lust for ever more dark magic, it was only a matter of time before he fell under the sway of the Dark Lord, Dracula. With Dracula's death years before (in Harmony of Dissonance), a powerful mage was needed to perform the dark rituals required to bring back the demon king once more. Shaft was lured into the cult of Dracula, made into their dark priest, and given the power needed to resurrect the vampire.

Shaft and the other servants of Dracula plotted, though. They knew, from history, that if left unchecked, the current Belmont hero, Richter, would storm through the castle and send Dracula back his grave once more. They reasoned, in a way, that putting more on his plate, and causing him to have to choose his actions carefully, could give the minions of Hell the chance they needed to defeat the hero for once and win the day. So they kindapped four girls from the nearby town, including Annette, Richter's fiance, and Maria Renard, a distant relative of the Belmont clan, and trapped the girls in the castle. Richter would be forced to rescue the girls, drawing out his battle. And since they had Annette, her potential death could sway Richter, causing him undue stress, tearing his focus.

What the minions, Shaft included, didn't expect that that Maria, when freed, would join with Richter and that the two would become an unstoppable combination. Even with all his tricks in play, including the summoning of powerful beasts to do battle with Richter and Maria, the heroes still bested Shaft, killing him. 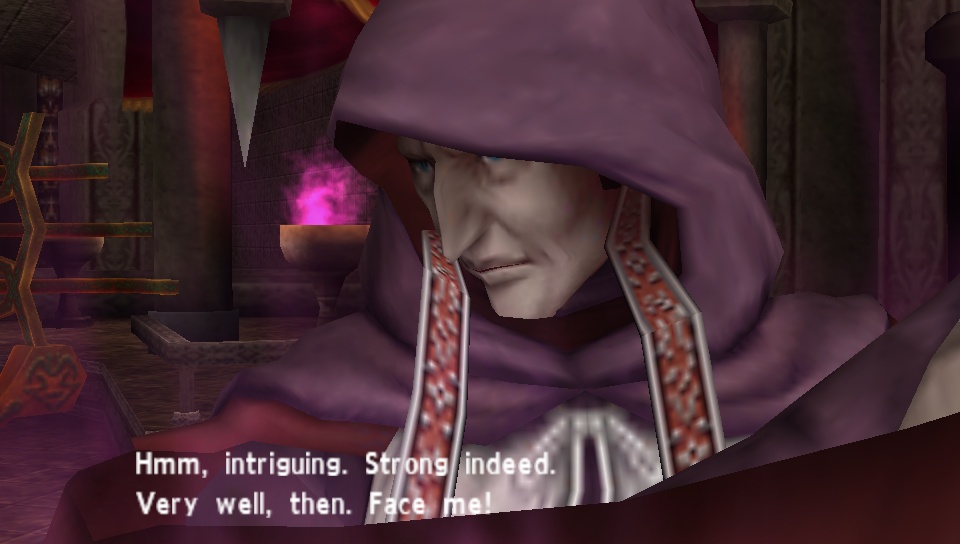 However, as a practicioner of the dark arts, Shaft could not be killed so easily. While his mortal form was deal, his soul lived on, a spectre with plans, still, to defeat Richter and Maria once and for all. After Richter and Maria saved Annette, Shaft made his presence known, attacking the heroes once more from beyond the grave. However, with the holy powers on their side, the two heroes were still able to defeat Shaft, dispersing his spectral form and freeing the castle of his curse... for a while.

Although Shaft isn't technically in Castlevania: Dracula X, the SNES remake of Rondo of Blood, He also kinda-sorta is. Called simply "the Ghost", this spectral entity looks a lot like Shaft, attacking the heroes with magic and summoned beasts.

The next remake of Rondo, The Dracula X Chronicles, does feature Shaft, but it also changes some of the story beats for the character. Firstly, Maria wasn't just kidnapped by Dracula minions but was also experimented on by Shaft, unlocking her powerful magical abilities she exhibits. So, in a way, his defeat later by her and Richter is really his own fault.

Further, you only fight Shaft's Ghost in this version if you've saved Annette. Fail to do this and she's the boss you fight instead of Shaft. This, of course, would garner you a bad ending, although it is required if you're trying to 100% the game with all bosses defeated.

But then, if you try to go and fight Dracula before taking on Shaft's Ghost in Chronicles, you won't be able to finish the game properly. After finishing off Dracula's second form, Shaft's Ghost will appear and steal away the dark lord. Oops.

Castevania: Symphony of the Night

Although he had been defeated, trapped within one of his own orbs of power at the moment of his seeming final demise, Shaft was far from done. He still had plans to bring back the Dark Lord, and since his previous scheme failed to go as plan, Shaft tried a different approach. Instead of emotionally compromising the Belmont to elminate him as a threat, Shaft would simply take the Belmont out of the equation. Using his magic, Shaft took over Richter's mind, turning the hero into a minion of the Dark Lord. From there it was an easy matter, then to resurrect Dracula, body, soul, and castle, all at once. He even used his powerful illusions to construct a second castle above the first, a darkend mirror, hanging above the clouds of the castle proper, out of sight. It was within this secondary fortress that Dracula was secreted, a place from from the prying eyes of potential heroes.

This plan was solid, and even took into account the possibility of a hero, like Maria, coming to the castle to try and find Richter and stop Dracula. Unfortunately for Shaft, what he did not forsee was a different hero coming to the castle: Dracula's estranged son, Alucard. Sensing an imbalance in the scale of good and evil, Alucard left his dormant rest, awakening from his grave to storm the castle and gain some answers. With Maria's help, Alucard was able to find a way to see through Shaft's magic, and in a confrontation between Alucard and Richter, the younger Tepes attacked Shaft's hidden power orb instead of the Belmont. This breaks Shaft's illusion completely and reveals the second, inverted castle above. 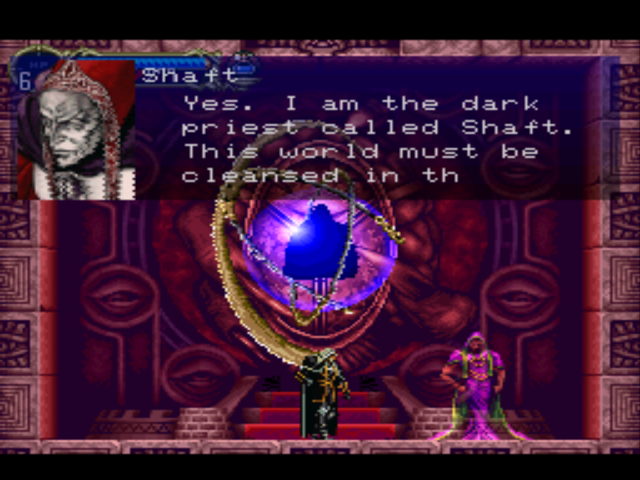 Still, Shaft could handle this. The second castle was even tougher to get through than the first, and even if Alucard did somehow manage this, the vampire would still have to fight Shaft before he could take on Dracula. Shaft could easily best Alucard. Simple matter.

Well, until Alucard did make it through the second castle. And he did fight Shaft. And Shaft did lose. And then he went on and killed Dracula, too. So, yeah, that plan went right to hell, and sadly for Shaft, this whole scheme used up the last of his magic. His spirit was sent on to Hell, never to trouble the world again.

To get the best ending for Symphony of the Night you have to defeat Shaft's orb without killing Richter. You do this by equipping Alucard with the holy glasses before sending him in to the Richter Battle. This shows the orb and allows you to damage it. if you fail to do this, though, you kill Richter and the game ends. In a way, then, this version of the game features Shaft's plan actually working, with the Dark Lord Dracula surviving to spread his darkness. Good work there, Alucard.

As the version of Symphony that's included in The Dracula X Chronicles is a largely straight copy of the original hgame (barring the addition of Maria as an optional playable character), Shaft's appearances, and his storyline, remain unchanged. He's also a villain (and unlockable character) in the sort-remake of Symphony, Castlevania Puzzle: Encore of the Night, although considering that game, nothing about the story is otherwise changed here, either.

The first battle with Shaft is, essentially, the whole meat of Stage 6 of Rondo of Blood. Upon entering his chamber, Shaft will throw an open of fire, sealing the room. He'll then summon four bosses, version of the first four from the original Castlevania. These are:

With these four beasts defeated, Shaft will then reappear for the big fight. He'll summon two orbs of elemental magic before leaping back and forth across the screen. As he dodges around, the orbs will: catch fire and float around, slowly homing on the hero; conduct electricy and then shoot bolts of lightning at the ground; and, become enshrouded in dark energy and fly at the player. Don't get cocky once you defeat him, though, as...

The next time you encounter Shaft in Rondo, it'll be his spectral form. One you reach the boss, his cloak will float down and then fill with his shape. Shaft will bounce back and forth across the screen each time you hit him -- if you know what you're doing you can stun lock him, controlling the fight and preventing him from doing anything. However, if you give him time he can summon undead versions of the wyvern (which will spray fireballs at the ground) and the behemoth (which will rise up from the ground and track across the screen. Little ghostly bats will also appear and will need to be taken care of to keep the arena clear. Keep him controlled, though, and Shaft's Ghost is a pushover.

When next we meet Shaft, it's in his ball form, hiding from sight in the main Richter battle at the top of the first castle. Equip the holy glasses and you'll see the orb floating around. You'll need to dodge Richter (who will be attacking you with whip and sub-weapons), but just damage the orb ten times and it will break, freeing Richter.

Finally, we get to the last battle with Shaft deep in the heart of the inverted castle (where ICVD gets its name). The spectral Shaft will taunt at you through a long cut-scene before the battle begins, over-explaining his plot worse than a James Bond villain. Once the battle finally begins, Shaft will float to the center of the room where he'll protect himself in a giant orb while his smaller elemental orbs float around him. These will cause various magical attacks but, seriously, if you aren't already over-powered by the time you get to this fight and actually give him time to see many of these attacks, you haven't been playing this game right. Just lay on the damage and no matter what he tries, Shaft will die very quickly.