We've discussed a number of randomizers on this site, and they've all generally been enjoyable. Most of them have been for the Metroidvania titles in the Castlevania series, creating remixed experiences for those titles that can be new and interesting. They're great, and we all love to have them... but what if the randomizers could do more? What if they could randomize things further and not just create a new way to play the same game but create a new experience altogether.

That's, essentially, the goal of Aria of Sorrow: Reprise, a "Roguelike / Endless Mode" hack from Xanthus, and it does exactly what it says in the tin: it turns Castlevania: Aria of Sorrow into a roguelike adventure. This, frankly, is something I hadn't seen before, in this way, from the randomizer community and it's great. A constantly replayable version of the game that doesn't just take the maps of the game but completely blows it all apart, room by room, to make a new experience every time? Yes, please.

At it's core, the roguelike Aria has a simple mechanic. You start off as Soma Cruz at the gate to Castle Dracula. Hammer and his shop sit in their normal place, and you can either talk to him venture into the castle. Once you venture out, though, everything you'd expect to find in the game is different. The game gives you an open area of the castle to explore, with rooms connecting in ways you would expect, and your job is to go out and explore.

There are some goals besides "don't die" on the table, though. You want to find the soul canisters littered around, breaking them open to get the powers you need to more easily explore the collection of rooms you've been given. You also will want to find gear that's littered around as getting stronger will be required to fight the enemies that will be coming for you. And you need to clear rooms as, every ten rooms, you'll have to fight a boss. With the boss defeated, you'll then get dropped back into the main area of the castle, with a note that the "Castle has shifted". Then it's time to explore again. 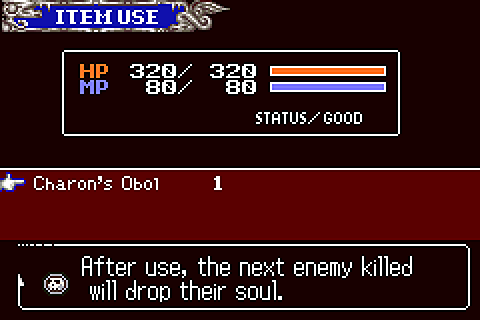 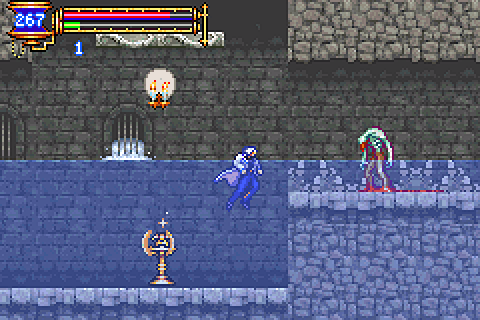 The setup for the roguelike randomizer is brilliant, honestly. Having the castle organized into random rooms (like a roguelike) means you will never see the same layout twice. Follow a hallway and you might find a room from the Chapel, or the Arena, or the Clock Tower at the other end. Then, once you've gone through 10 and cleared the boss, everything you just learned is randomized and you have a new experience to go through again. You can't really learn the whole layout because the layout will shift around you ever few rooms leaving you constantly wondering what's next.

And yes, as you would expect from a roguelike randomizer, there are no save points within the castle. Although you can get "Books of Return" that will warp you back to the main hall so you can visit the shop and maybe find a new route to explore, you will never find save rooms to lock in your progress. If you die it's back to the start, at Room 0, to start a new journey all over again. That, along with the fact that Mina has been removed, so you won't get free healing from her, means you have to be judicious if you want to make it to Graham and beyond for the end game.

Helping you, though, are a number of bonuses that you can find along the way. There are purple soul canisters scattered throughout the game, and these can have stat bonuses like +2 to INT or CON or STR buried within. Some can also boost your HP or MP by +10. There are even canisters lurking in walls for you to find, increasing your experience points. That can help a lot in making the constant push through this game far more manageable. The increases are a nice touch, rewarding exploration beyond just finding gear and basic souls.

At the same time, the game can also punish you in interesting ways. Every few rooms the difficulty of the game will increase, leading to tougher enemies and harder challenges. You'll also find some rooms that have penalties attached to them. These can be things like Cursed Enemies, Poisoned Money, Increased Knockback, and more. Some penalties are amusing, others are harsh, and learning to work around things to stay alive is all part of the experience. I rather liked these varying states of difficulty as it made me think about if I wanted to push forward into an area or back-track and try to find a new route to take. Speed versus strategy, which was an interesting idea for a randomizer. 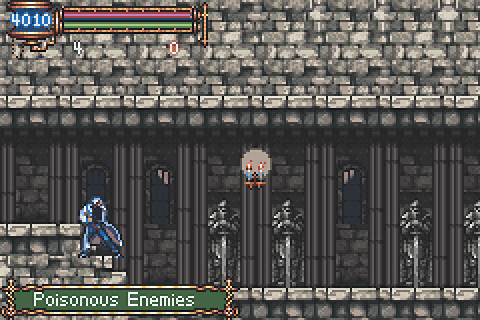 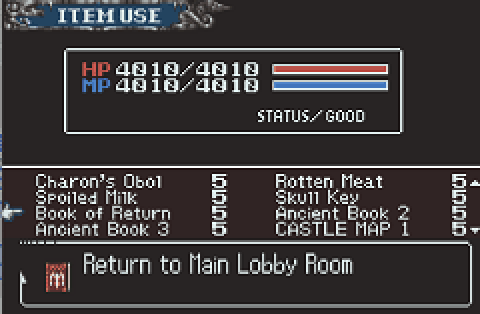 The roguelike mod also includes all kinds of re-balancing patches and changes. One of the more noticeable it the Luck patch which actually makes Luck useful in this game (since it didn't really work in the vanilla release). Certain weapons have new effects, some souls have been buffed or debuffed, and the whole experience has been better tuned to work within the bounds of this roguelike play style. Even though the hack is still in beta, this roguelike experience feels really solid and polished.

Now, I will note that not everything is perfect, just yet. Some level graphics don't quite tile right (which is a minor complaint, to be sure) There is also the occasional glitched enemy (although I haven't seen too many of them in my time in the game), and other little niggling issues to resolve. None of these are game breaking, and most will likely be fixed by the creator in the new few weeks. Just something to be aware of in this early stage for the randomizer.

Nevertheless, Xanthus is onto something great here and I look forward to seeing just what all gets added to this randomized experience. The creator has put in regular patches over the last few months, and it sounds like there's a solid road map for additional tweaks to come. If you have played the original game, and the randomizer, and you're looking for something newer and even more remixed, Aria of Sorrow: Reprise is the game to play.