Although I tend to avoid character hacks for games (as in those hacks where the look of a character is changed but the game otherwise plays exactly the same), I do make exception for rom hacks where more substance is put in. If you not only change the look but also rearrange somethings in the game, or try to add in some new ideas that makes the game feel like more than just a palette-swap of the original title, than I am more interested (and more likely to review) a hack. We already had one character hack that frankly blew me away, caminopreacher's Castlevania: Aria of Sorrow Persephone Hack, and now we have another from the same creator. This time around, though, it feels like there's something lacking from the final product.

Like the Persephone hack, Castlevania: Call of Chaos sees caminopreacher recontextualize the original Castlevania: Aria of Sorrow with a new character. In this case our new "hero" is the Prince of Darkness himself, Dracula. Brought to the creature of chaos that is his own castle via mystical means, Dracula has to fight his way through, killing enemies and collecting souls, all so he can fight to Chaos and reclaim his true power.

Considering that original hero Soma Cruz is Dracula reborn in Aria of Sorrow (sorry if that revelation comes as a spoiler for this classic title in the series), swapping in Dracula for Soma makes a certain amount of sense. Whereas with other characters swaps, like Persephone, the creator doesn't have to go out of their way to justify why Dracula is stealing the souls of fallen foes. This is what he does, his Dominance ability naturally allowing him to claim the souls. Dracula (well, and his son Alucard) basically is the most natural fit for this character swap.

To the game's credit there are little changes that make this character swap feel somewhat interesting. Little things, like the addition of a "bat familiar" as a bullet soul, or swapping in the "wolf form" for the basic slide, show a certain level of care for the character. These are similar additions as were made for Persephone, and it's appreciated here as over in that hack. That said, I don't feel like there's enough of these changes to make the rearrangement that interesting. This feels like a rough draft of a Dracula hack. I wanted more from this (perhaps having been spoiled by the Persephone Hack), but it doesn't feel like this game goes quite far enough in customizing the experience to Dracula. 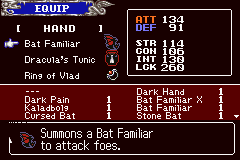 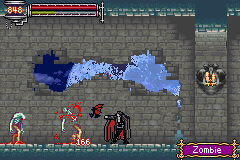 Perhaps some of that is because this character swap doesn't feel nearly as extensive as with Persephone. Here the character of Dracula is clearly just drawn over Soma, with minor edits to the animation. His basic moves, most of the souls, and even the weapons and equippment he finds, are all largely the same. Yes, some graphical hacks have been made, adjustments to colors and so forth here and there, but it again doesn't feel like enough. Dracula is more of a Soma than a fresh version of the character, making this feel like more palette swap than entirely new mode.

Some bits of the castle are rearranged to try and make this mode feel a little different. One big change I noticed, playing through and seeing the game play out, was that Balore doesn't lead to the Giant Bat soul. Instead, you find Hippogryph behind him. Fundamentally this doesn't do much to the overall experience as one form of flight is as good as another. You do get the Giant Bat soul elsewhere and it doesn't change anything about the game functionally. It's just one of a few little changes. Flow wise, though, the game is the game, the same castle navigated, effectively, the same way.

Now, I'm not demanding that ever hack has to be a substantial change. We don't need to see rearranged castles with new layouts every time. Plenty of fun hacks get by with character swaps that change the game in interesting ways and improve the experience. I think the issue I have here is that, by their default nature, Dracula is so substantially similar to Soma that the character swap here feels pretty conservative. That's the case for most of the character swaps in here -- Carmilla in place of Mina, Olrox in place of Graham, and so on. It all feels very safe and simple despite this being Dracula's adventure. He's the king vamp and you want just a little more for him.

Well, I guess safe in every respect except the difficulty. This game has the tendency of so many others to crank up the difficulty in annoying ways. Dracula deals a decent amount of damage but the enemies around him have had their stats scaled up so every fight, from a lowly axe knight to the bigger bosses, feels slower. It's not so bad that you feel like you're in a nightmare hack, but it is noticeable. Worse is that because of the scaled stats Dracula is going to take a lot of damage even while wearing some of the best gear in the game. You have to know what you're doing, and play really safe, to get through this hack in one piece. 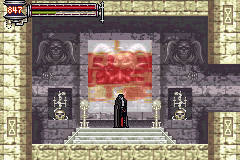 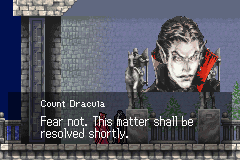 Overall this hack doesn't feel quite as good as caminopreacher's Persephone Hack (oddly that game was released one day before this one). There are fun ideas here, and I like playing as Dracula, I just wish the hack had more going on (along with just a little more balance). There's a core kernel I like but the rest of the hack doesn't live up to its true potential. The hacker is great, and I do make it a point to check out caminopreacher's work when its relevant to this site. This just isn't as strong as some of the other stuff they've done. A nice idea but not A-plus effort this time around.