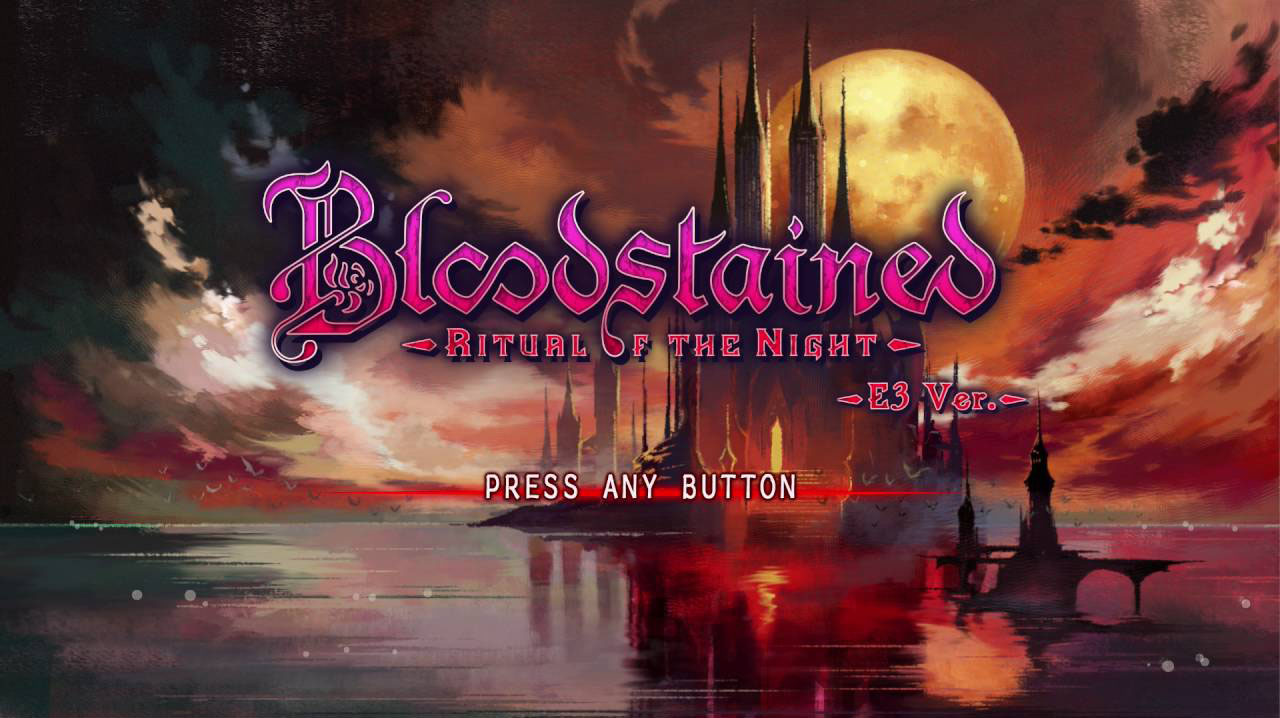 For the third set of expansions, ArtPlay not only fulfilled another promise from their Kickstarter (and brought part of Bloodstained: Ritual of the Night kind of into parity with the other two entries in the series so far) but also fulfilled their agreement with Raw Fury, completing the crossover with that publishing studio's game, Kingdom: Two Crowns. Of the two parts, the new "Classic Mode" feels much more complete. The Kingdom crossover feels like little more than a tacked on contractual obligation:

In basic construction, Ritual Classic feels quite behold to Konami's original title. It's six stages of old-school platforming as heroine Miriam traverses the Demon Castle of Gebel to find her one-time friend and end his reign of terror. Along the way you'll venture across stages packed with enemies and bottomless pits, taking on a variety of bosses all before that last encounter up in the castle keep. It is, frankly, so close a riff on Castlevania that I'm surprised Konami hasn't straight up sent a cease and desist letter.

In fairness, Ritual of the Night (and its two prequels) borrowed a lot from the original Castlevania series, with plenty of enemies that were just graphic-swapped versions of enemies from Konami's series. Even then, this version of the game could have been developed directly by Konami for their series and it wouldn't have felt out of place at all. The fresh coat of paint is the big change over the classic titles, but everyone else about this feels beholden to Konami's flagship series.

Miriam controls, in a lot of respects, like Richter Belmont. She moves like you'd expect, being able to jump, use her whip, and various sub-weapons. When you jump you're committed that that jump (no changing directions in mid-air), and if you get hit you're taking knock-back as well. Miriam does have a little more agility than the oldest heroes in the series, being able to do a back flip double jump for a little extra air, plus she does already feel a little more floaty, making his jumps maybe just a touch more forgiving. 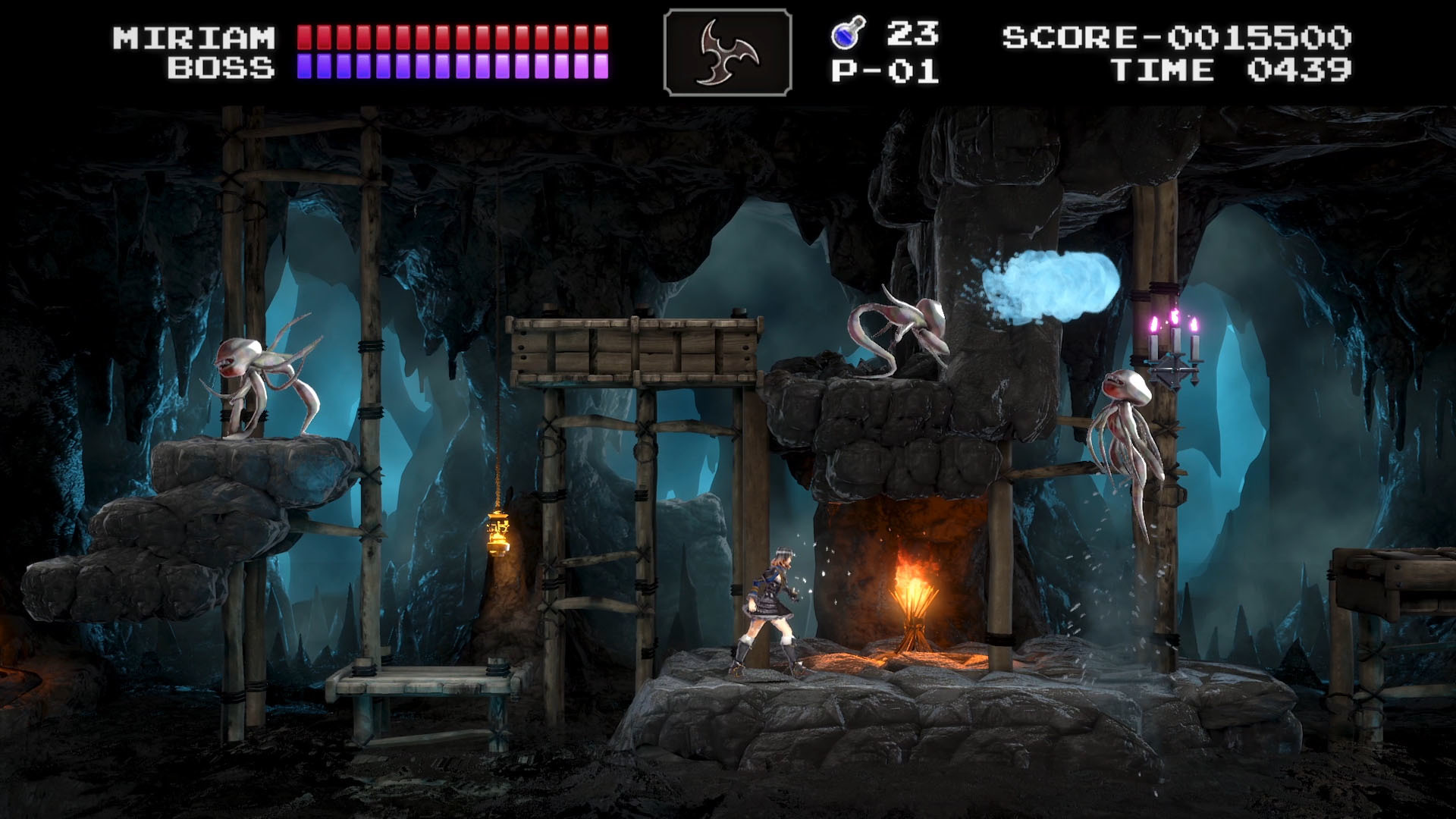 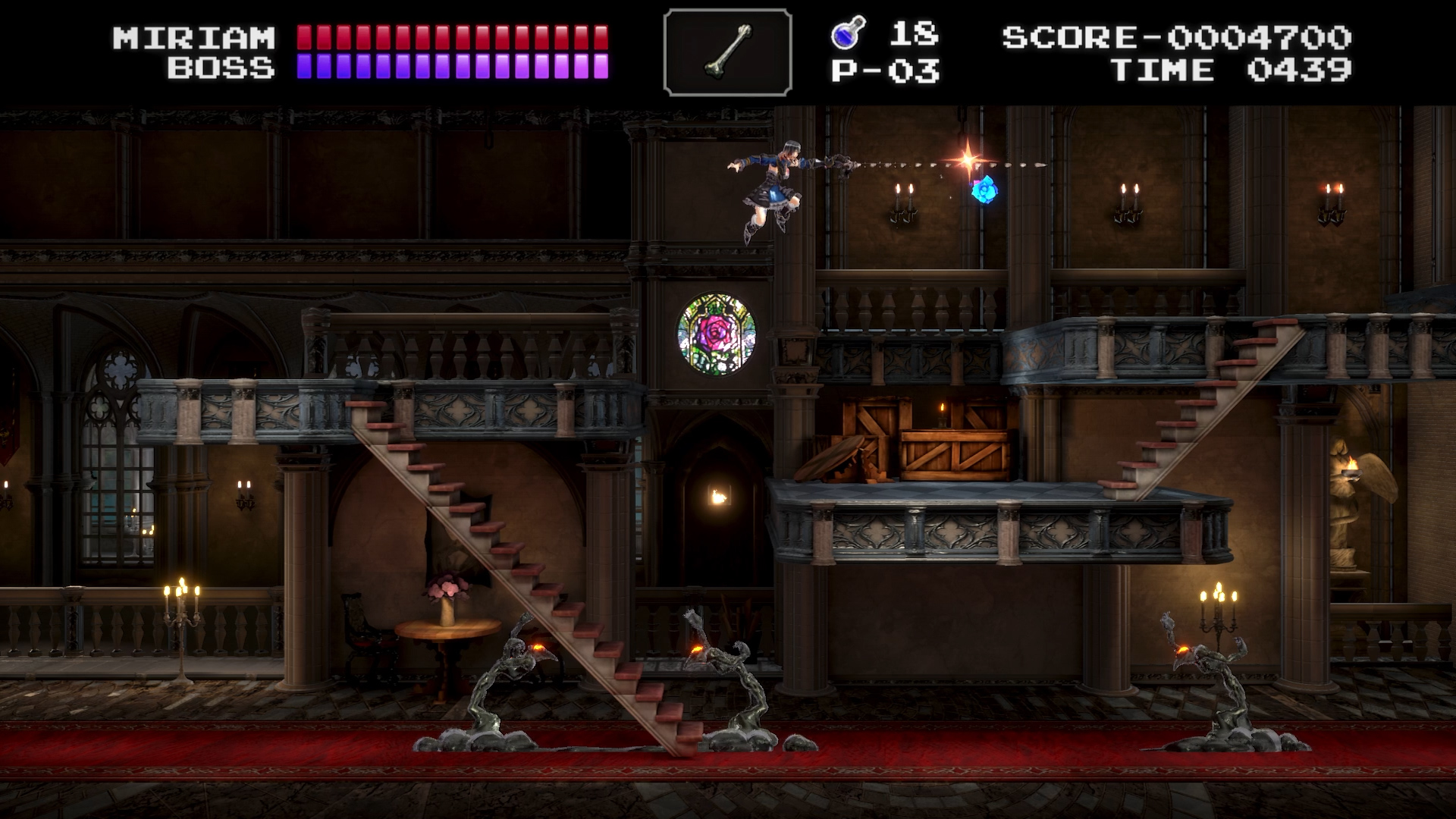 Her sub-weapons also feel modeled on the classic series. She has a knife and a vial of holy water joined by stand-ins for classic weapons: a tossed bone instead of an arcing axe, a ninja blade that flies out and back to replace the holy cross, and a yellow shard that freeze time like a stopwatch. Essentially, once you get used to the new coat of paint (which borrows all its graphics from Ritual of the Night) you'll feel right at home if you've played any of the old-school games from the NES and SNES era.

In some ways I wish this retro mode were a little more forward thinking. Miriam feels a little limited in her move set -- no multi-directional whipping, no double-jump, no item crashes -- and while most of that is true for her character in all her other appearances (at least until she finds special shards otherwise) it does leave you feeling like this is the most limited version of the heroine yet. And while I'm sure they wanted this game to stand apart from the two Curse of the Moon games, the fact that you only get to play as Miriam (despite Zengetsu and Bloodless, so far, being playable in the main game) leaves this feeling even more limited in some respects.

That said, as a loving homage to the game that started this all, Ritual of the Night does nail it (a little too well). You can see the places where the developers looked at the original game and tries to mimic that title. There's front entrance to the castle leading that leads to a short underwater area before a fight with a creature that looks a lot like a giant bat. There's a climb into the ramparts that then leads to a steep drop deep into the bowels of the caverns beneath the castle. There's a climb up a clock tower that leads to a fight with Gremory (that feels all too reminiscent of Death), all before that last push to the Castle Keep with a two-stage fight with Gebel (putting on his best Dracula impersonation), all before a final fight with the one controlling him, Dominique (who feels like Dracula's final form from Super Castlevania IV.

And, like the classic games, this title new mode is brutally hard. Even on Normal difficulty I found myself struggling, both from the amount of damage being cranked out against me and from all the enemies on screen. I was able to crank it down to Easy (although for the really ballers out there, the mode also features a Hard difficulty) and get through the game, but even with it taking it "easy" on me, the game didn't hold any truck with my crappy game play. It pushed me, hard. 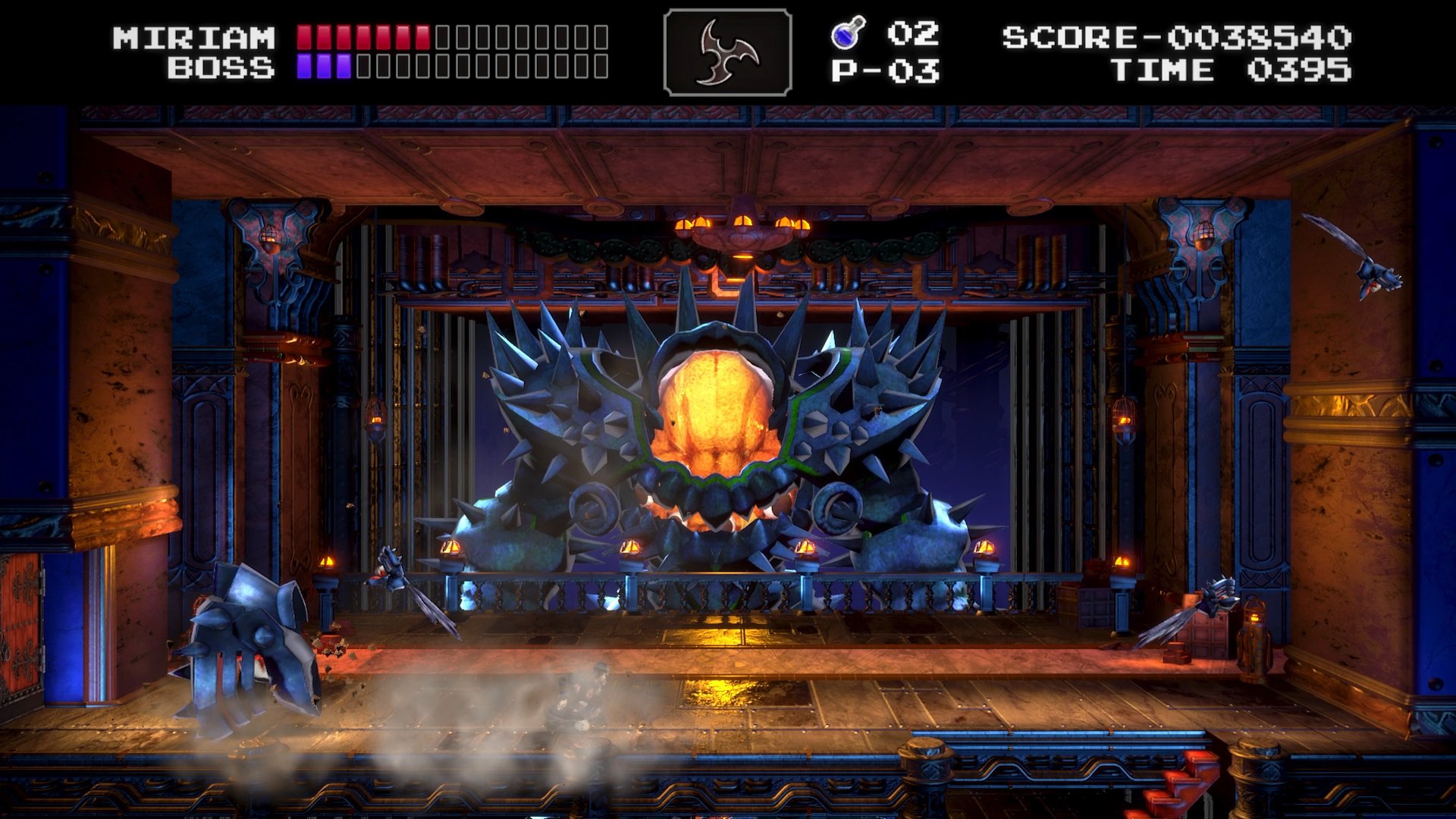 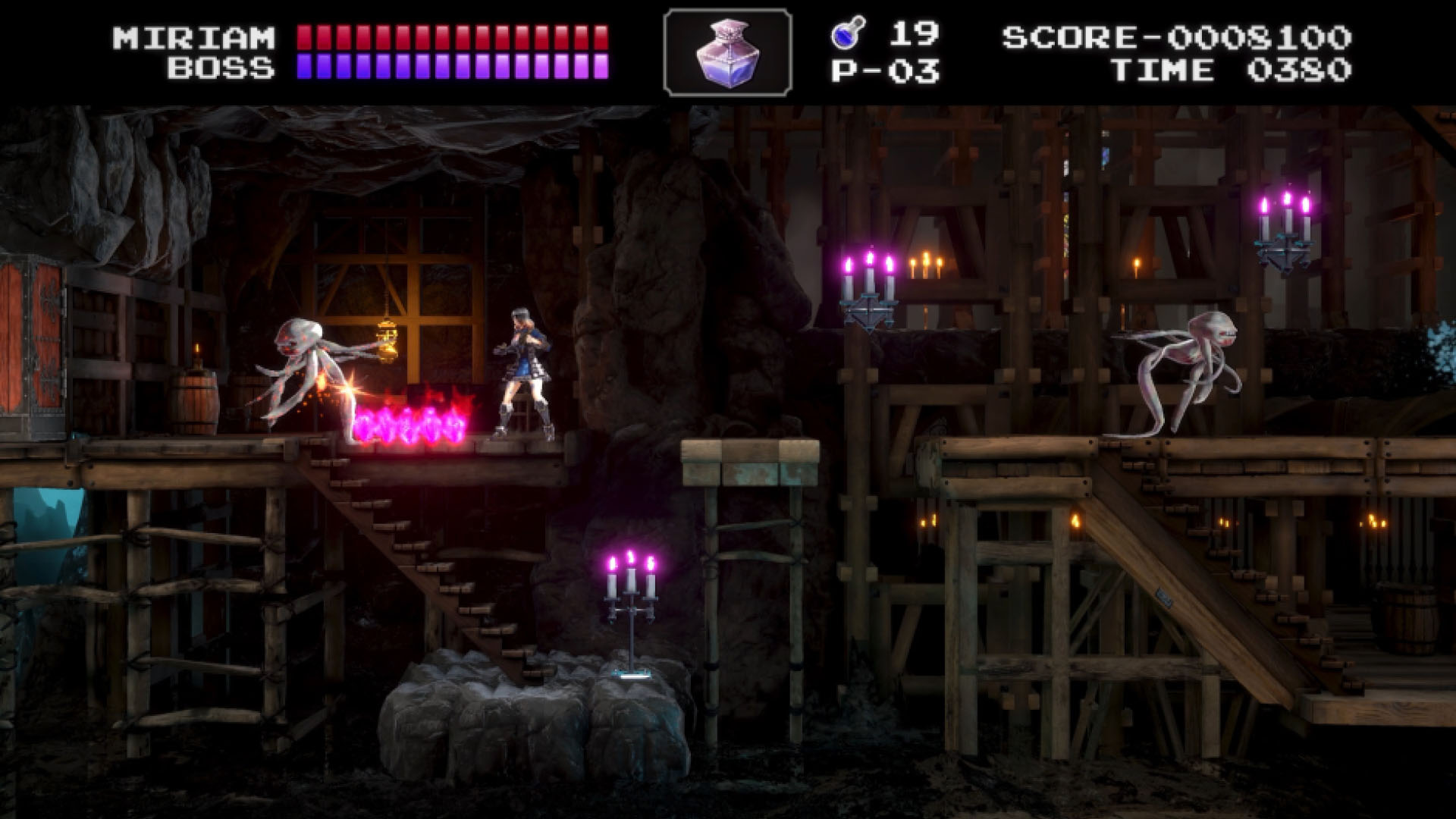 If, however, you are one of the elite at these kinds of games and feel that Classic Mode isn't hard enough for you, there's a way to crank the difficulty up even further. Dubbed "1986 Mode", you access this version of the game by entering "The Konami Code" (Up, Up, Down, Down, Left, Right, Left Right, Left Face Button [B], Right Face Button [A]) on the Classic Mode title screen, and it'll show "1986 Mode" at the bottom. Miriam's color will change to red, in game, but more importantly all the "conveniences" of the original mode are removed: no jumping on stairs, no back flip or dack dash, and no mid-air control. This version emulates everything about the original Castlevania and, for hardcore players, is as unforgiving as you probably crave. Some will love this option, and even I respect its inclusion even if I personally couldn't stand playing something this unrelenting.

The game's challenge, in either mode, will suit the hardest of the hardcore players just fine. While so many games have come into the void that Konami has left since they stopped making proper Castlevania games, they've all generally tried to be the next great Metroidvania title. Not many games outside of the two Curse of the Moon titles have really tried to go back to the roots of Castlevania to find the true old-school game play that made the series famous. ArtPlay continues to support that game style, both in the 8-bit prequels and now here, in this bonus mode (and bonus-bonus mode), and that should be lauded.

Essentially, if you're looking for a shot of true, old-school game play, Ritual Classic is exactly what you're looking for. It is a bit slight, at only six stages, but it'll push you and make you work for every inch you get. It feels exactly like you want, tight and responsive without losing the quirky retro charm. It's a fun mode and, as a freebie to the main game, a worth addition to help flesh out the complete package.

Meanwhile, the other "big" advertised chunk of content added as part of this expansion was the promised Kingdom: Two Crowns crossover content. As I noted in my review of that game, its Bloodstained-themed expansion, "Dead Lands", felt rather slight. It was basically just a reskin of the main game with the four heroes of Curse of the Moon added in as alternate monarchs. It was a nicely done graphic-pack, mind you, and the abilities of the monarchs were somewhat beneficial (in comparison to the main monarchs in the game that didn't do much of anything), but still, this wasn't really as big of an expansion to Two Crowns as Bloodlines fans were sold.

Well, I do owe some apology to that game's expansion as, in comparison to the bonus content included in Ritual of the Night, Kingdom's crossover content is practically massive. In Ritual, when you're playing a Miriam, go to the shop and buy the Crown of Creation. If you wear this while riding the train you'll exit out of that area into the Dead Lands. This isn't some big area, though, as all you'll get is two screens worth of backgrounds modeled after Kingdom and then a boss fight against one of the night creatures from that game. Defeat it and you'll get a new green shard, a summon of one of the archers from Kingdom. It's cute, but very slight. Oh, and then you're immediately kicked out, leaving you with a bit of shock over just how short this new "area" really is. 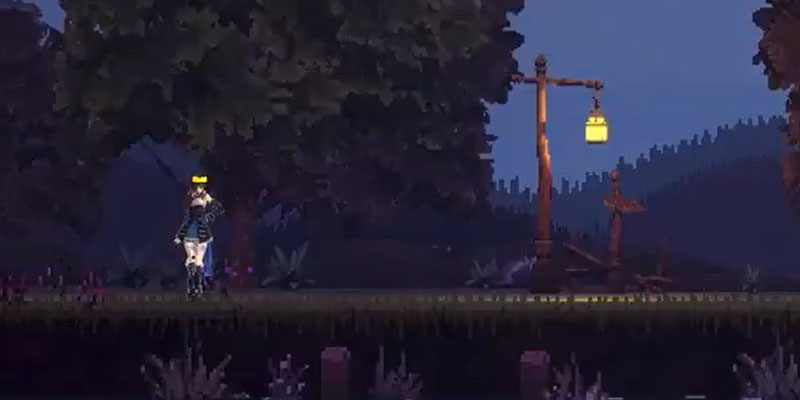 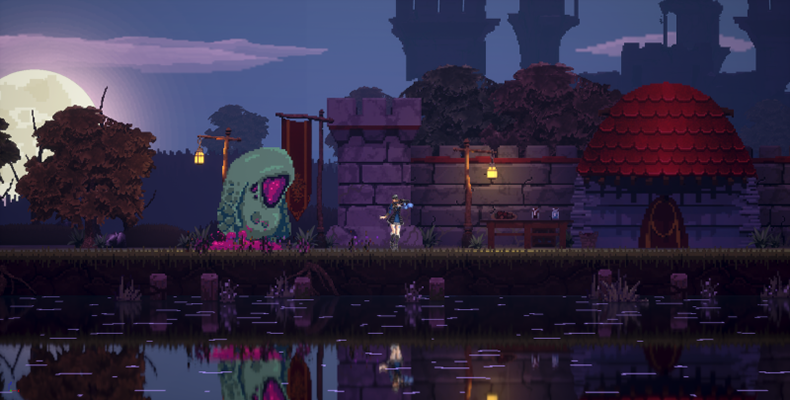 Now, don't get me wrong, this expansion was all about Classic Mode, and that game mode rightly deserves praise. However, ArtPlay did make a big deal about this crossover content, making it a prominent part of their PR for the expansion and selling it as "a new area to explore", which is disingenuous at best. A new little zone to explore is cool, and a new shard if great, and it is all for free which is really nice. But This could have been left as an Easter Egg for players to find. Selling it as "big crossover content" really over-hypes what this area does. It's even more slight than the 8-Bit dungeon you can unlock in the castle, with even less reward for it.

I enjoy Classic Mode for what it is. I doubt, even playing through the main game again, that I'll bother going into the Dead Lands. Even as short as it is the area still feels like a waste of time.