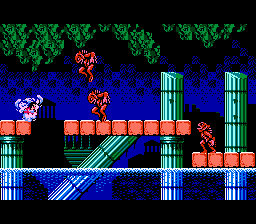 It's been said that the great works of the Romans are beautiful in their efficiency. Even now, hundreds of years since the fall of the Roman Empire, there are many bridges, roads, and aqueducts that were built by the Romans and yet are still standing. It speaks to their masterful construction, and it was this engineering that Dracula copied in the first construction of his sprawling vampire castle.

One might think that a vampire wouldn't be interested in moving water around his kingdom since vampires cannot cross moving water. The many creatures and denizens of his kingdom, however, do need water, and Dracula is a resourceful leader. He built (or, really, had workers build) mighty projects to move his resources around his kingdom, and these great works are magnificent to behold. If you're traveling in his lands you owe it to yourself to see the mighty aqueducts and marvel and their design. Just... beware the mermen that live among their waters.

About the Aqueducts and Sunken Cities:

The lands of Castlevania are dotted with aqueducts. There are actually two kinds of waterways in the series: aboveground and beneath it. For the sake of organization, we'll refer to the aboveground types as aqueducts, while the below ground types will be sorted under "underground waterways" in a separate article. This is because while the aboveground waterways have a different ambiance to them, sometimes open the air with different enemies found within. The underground types, meanwhile, more closely resemble sewers in all their dark majesty.

Aqueducts are the home to mermen, often found lurking beneath the surface of the water, ready to leap out and attack unsuspecting foes. This, coupled with treacherous jumps leading to the drink below, can make these zones quite dangerous indeed.

Also worth mentioning is that, at times, these aqueducts can lead to sunken city, grand collections of ruined buildings laying half submerged in the water below.

The first aboveground aqueduct of the series comes in Castlevania III: Dracula's Curse in Block 6A, the Causeway of Chaos portion of the Cursed Tower. Armors, fleamen, and fishmen hound the heroes as they make their way through flowing streams of water. Horizontal sections of water eventually lead to a lower area resembling a sunken city, guarded by the Twin Dragons. 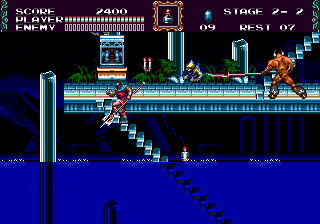 Next came the Transylvanian Wilds of Super Castlevania IV. Sometimes likened to a river, the aqueduct section of Stage 2 comes after the fight with Medusa. Here the hero, Simon Belmont, slides down a paved causeway lined with bricks and columns. Hounded by lying man-bats, Simon has to avoid spikes and traps before reaching the end (which is unguarded).

Immediately after Super Castlevania IV led into its third stage, a cavern that gave way to a waterfall tower and then, finally, an aqueduct feeding the waters of a sunken city. Clearly designed in reference to Castlevania III, this is another watery domain full of mermen and dangerous pitfalls. The section isn't just a river, though, leading up through the watery city, leading Simon on a long climb that eventually leads to another fight with the Twin Dragons, back to once against attempt to send the hero to his doom.

Stage 2' of Castlevania Dracula X: Rondo of Blood featured the next aqueduct, this one in ruins. The stage begins on the upper part of the aqueduct, a seeming series of broken bridges that, along the normal path, lead up and down the aqueduct as merman leap from the waters below to attack. As evening falls on the heroes, they can either take the normal entrance out of the stage, leading to a battle with the Werewolf, or a lower exit that would give way to the strangely constructed Bone Golem. There is also a very secret entrance early on in the stage, found via falling through an early gap in the bridges. This will take you to the Ferryman who will take you on a treacherous trip along the river below to Stage 3', the Cemetery.

Finally, in Castlevania: Dracula X on the SNES we had Stage 5', the Sunken City. Dangerous jumps are once again normal, as are the constant barrage of mermen, this time aided by water ghosts. This section leads into a climb up and down through caverns, followed by a span of aqueduct that lead to a battle against a water dragon, Salamander.

From here, in the main part of the series, aqueduct steadily transitioned into sewers as the games started putting the entirety of their domains within the bounds of Castle Dracula. 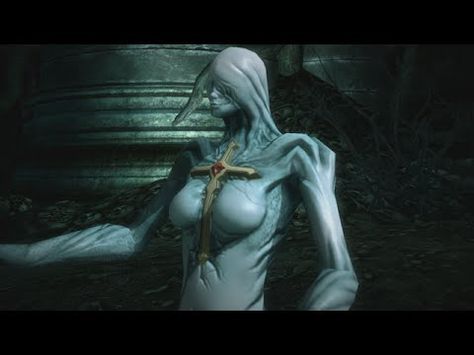 That said, a few lands outside the main bounds of Dracula's domain did feature their own watery sections. The first of these came in Castlevania II: Belmont's Revenge. In the game Christopher Belmont had to venture into four elemental castles, each with their own traps and dangers. The Crystal Castle was a fortress that very much resembled a submerged city filled with aqueducts. Starting from the left (one of two stages in the game that send Christopher leftward), the caste send Christopher through streams that pull him back and forth, through the halls of the castle itself, over jumps and across streams, before sending him down a spike-lined tower, all before s split in the castle sends the hero to one of two different treacherous sections over water, before a final series of jumps send Christopher to a battle with the lightning-controlling mage Dark Side.

Genesis game Castlevania: Bloodlines saw heroes John Morris and Eric Lecarde venture to the half-submerged city of Atlantis, traveling along broken aqueducts, along treacherous flooded climbs, and then through more aqueducts with crumbling statues. The mid-point of the stage is guarded by the Wizard, quickly followed by a battle against two hulking Heavy Armors, all before the aqueducts lead to a final descent into a battle against the Golem at the depths of the Atlantis Shrine.

Finally, late in the main series we had the Mortvia Aqueduct in Castlevania: Curse of Darkness. This series of zones found hero Hector traveling along a series of aqueducts and fortifications, following the flow of river ever closer to the edge of Dracula's domains. With the rivers still flowing the hero was forced into the Water Coliseum where the Skeleton Diver waited to do battle. Only after the water was drained, though, could the aqueducts be used as a bridge into the ruins of Castle Dracula.

Causeway of Chaos in the Cursed Tower, Block 6A of Castlevania III: Dracula's Curse

The Sunken City in Stage 5' of Castlevania: Dracula X