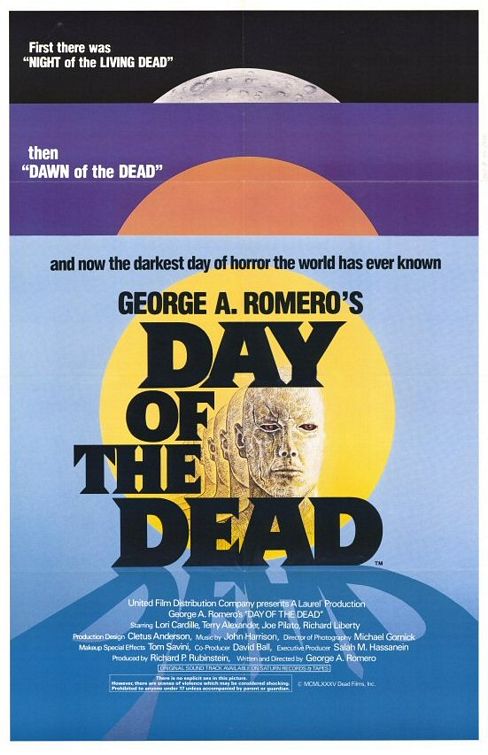 As I noted over in my review of Dawn of the Dead, I'm in the minority when it comes to zombie fans because I actually prefer Day of the Dead over its 1978 predecessor. While I think both are great films, there's a lot about the third of George Romero's Dead flicks that give it the edge for me. Not that I think you necessarily need to compare or contrast these movies against each other. I much prefer taking them as a whole, watching them from one to the next (even if I substitute the 1990 Night of the Living Dead in during my trilogy watchings, again putting me in the minority). Taken altogether, these films tell a tale of the world quickly falling apart and then humanity, very slowly, losing what makes them human.

I think that, above all else, is why I like Day of the Dead the most: it's the one film that actually scares me in this series (although in general zombies are the one monster, more than any other, that I actually find terrifying) and that's because of how bleak it is. Dawn of the Dead had its bleak moments, as the old world died off and we aw what humanity slowly because between the rednecks treating it like a holiday and then the marauders destroying what was left of civility. But here, in Day, we see humanity trying to stay human months or years after the outbreak, and at this point humanity is definitely losing. Everyone is slowly going mad and, honestly, there's simply no hope for the survivors any more. It's a land of the dead (although that's the title of next film) and we're just holding on at this point to what little is left.

Day of the Dead focuses on two groups, both living together in an underground military bunker in Florida. The first group, and our nominal heroes of the story, are the scientists working to figure out a "cure" for the zombie problem, with our primary character from that group being Dr. Sarah Bowman (Lori Cardille). She's aided by helicopter pilot John (Terry Alexander) and radio operator Bill (Jarlath Conroy). The actual leader of the scientists is Dr. Matthew "Frankenstein" Logan (Richard Liberty) who is convinced the zombies can be controlled, trained even, if given the right motivation. He's even managed to train one, a zombie he calls Bub (Sherman Howard), who genuinely seems like a passive zombie that, amazingly, can think and maybe even has actual feelings.

Unfortunately for the scientists they have to work with the military folks who run the base itself. Led by the crazed Captain Henry Rhodes (Joseph Pilato), a guy clearly pushed over the edge by the apocalypse, the soldiers -- Gary Howard Klar as Pvt. Steel, Ralph Marrero as Pvt. Rickles, Phillip G. Kellams as Pvt. Miller, Taso Stavrakis as Pvt. Torrez, and Gregory Nicotero as Pvt. Johnson -- are all ready to go crazy, one step away from killing most of the scientists, raping Sarah, and then taking the helicopter and flying off into the sunset. But then, where would they go? The entire world has been taken over by zombies without a communication from anyone else for months. At current estimates the zombies outnumber humans 400,000-to-1, so where would they go? What can they do? This is the end of the world and humans have already lost. 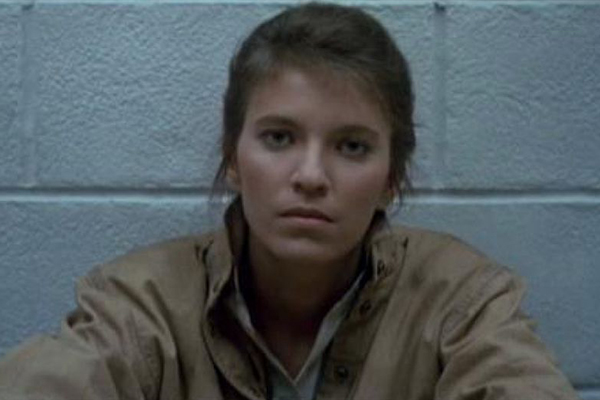 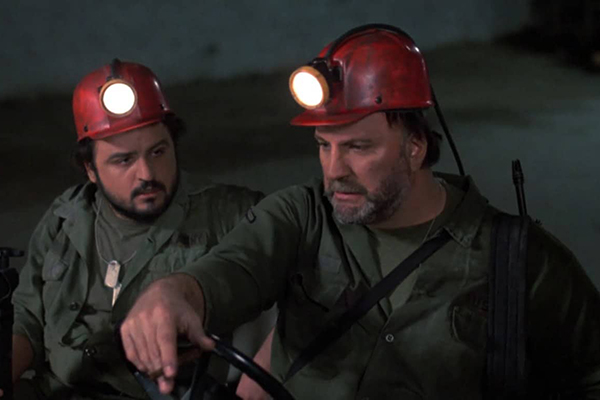 The previous two films were bleak -- this is an evolving story about the end of the world and humanity living on the brink, told over three films at this point (which more to come along after as Romero continued to work on his Dead films) -- but Day of the Dead is the film with, easily, the least amount of hope. Sure, it was hard to get behind the rednecks or the bikers from the previous films but at least in those cases it looked like, somehow, humans were still finding a way to get an edge over the zombies. Someone, somewhere, might have survived and could eventually find a way to bring us back from the brink. Day of the Dead, though, says "no". Humanity in this film is already screwed and there's no coming back. We're the endangered species, effectively extinct, and all we're doing now is going through our death throes before it's all over and the zombies fully take over.

Sure, the ending of the film, where three of our heroes rest on a beach having escaped the carnage at the military base (because there's always carnage to cap one of these films, no matter where it's set), seems kind of hopeful, but is it? This is three people, living out in the open on a beach, presumably on an island out in the middle of nowhere. If there aren't any zombies there the humans can probably live for a few comfortable years before they die, but this isn't a large enough group to rebuild society. They get their happy ending but it's with a big asterisk hanging over it. They survived, but everyone else is dead and that's it. After this the zombies will keep on roaming, never having to die, but humans will be obliterated within a decade or two and there won't be anymore. It's s scary thought but one the film handles really well considering.

But then, in general, this film really handles its subject matter well. It's a dark and violent movie that never lets up, always keeping the pressure on its characters, always ratcheting up the tension and the terror. By the end of it, when all hell breaks loose and the zombies finally invade the base, it comes as a release. We get to watch a bunch of characters die (and, for the most part, it's all well-deserved deaths), with all the tension leading right into zombie carnage. The film builds and builds so that when it finally gets to the climax you're ready for it to release. It's creates this case where the scares hit harder because you've been on the edge of your seat, watching the humans figuratively tear each other apart only to then have the zombies literally do it. It's horrible and painful but because of everything you've felt up to that point it's also a total rush.

Of course, the zombie gore itself is great, as we should expect from this films. As it's a horror movie made in 1985, all the effects are practical in nature without a hint of CGI (that would change in later Dead films, sadly), and because of that every bite and gush of blood and tear of flesh is visceral and disgusting. As I've noted before, it's not a good zombie film until you have a proper disembowling, and this film not only delivers on one of those but also in so many other grotesque ways for people to die that Day of the Dead certainly takes the crown for most violently gross of all the Dead films. 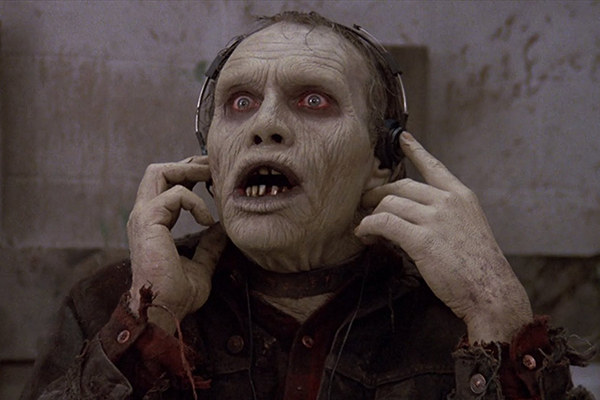 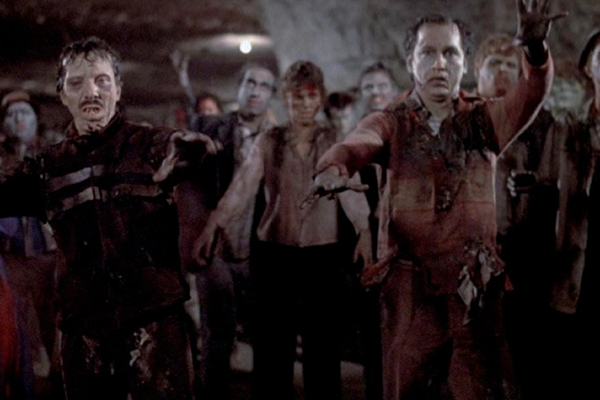 It's all in service of painting that bleak story for the film. Romero always packed a message into his movies, and the fact that humanity couldn't be trusted to keep it together when it was pushed to the brink was an obvious point Romero wanted to make here. Viewed through the lens of our modern era, with MRA idiots abounding Online, I do think there's a second message to take away, that of the dangers of toxic masculinity. I don't think it's an error or oversight that the hero of the film is a woman this time around (more so than in the previous two films Romero directed) and that all the villains (and you could easily describe all the military men in this film as the villains) are aggressive, gun-toting men. Romero was making a point about genders, about toxic behavior, about differences in personalities, and maybe poking a little at the kinds of people that would continue serving in a military force (especially after it's clear the government collapsed).

He wanted to draw a line in the sand and show where he thought different groups would fall. He was saying that there are certain types of people that could survive in an apocalypse like this (or at least not violently destroy themselves) and it wasn't the gun-toting idiots. Those looking for a different path, those that saw that we needed to find a new way to live, were the only ones that had any hope of survival. In a way it's a perspective of anger versus acceptance, if you will (and the movie even starts with a bit of bargaining, considering the opening of the movie). There' no point to fight against what happens, you have to find a way to evolve past it.

But then the film illustrates that there's no hope in that either. Some might survive, but humanity is dead in the end. It's dark, it's bleak, and it's a horrible, yet entirely fitting, end to the trilogy. For a solid two decades the Dead series ended with this film and, in a way, it was a proper, fitting ending for the series, a cautionary tale of where we were headed and what we needed to avoid.

And then Romero made a fourth film in the series, Land of the Dead, and ruined it all...