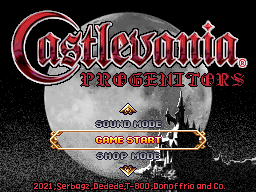 As I've noted before, I don't tend to review hacks that just put a different character skin into a game and call it a day. Taking Richter and re-skinning him to be Trevor might be a solid technical accomplishment (admittedly it's something I've never tried to do) but if that's all the hack does there really isn't much to talk about. I'd barely get two paragraphs talking about that which isn't enough for a review. If you're going to swap in new characters you have to do something more with it to get my attention.

That's where we cut over to Castlevania: Portrait of Ruin - Progenitors, a fan-hack that swaps out multiple characters from Castlevania: Portrait of Ruin. In place of Richter Belmont and Maria Renard in "Richter Mode" we get John Morris and a young version of Eric Lecarde. As a bonus, Old Axe Armor mode is replaced with playable Getsu Fuma. It's three new characters to explore the game in two solid modes.

Those that know your Castlevania lore will have already seen the hook of the hack: Portrait of Ruin was a sequel to Castlevania: Bloodlines, and this fan-hack inserts the heroes of that game into the sequel. It's a solid choice, giving these two heroes their due once more with a new adventure to explore. They'll battle their way through the standard castle of Portrait of Ruin (and all its paintings) for a decently challenging time.

As far as basic play, John takes the place of Richter. He comes with Bloodlines versions of his sub-weapons, so the Cross (for instance) is swapped out with the Boomerang (which only appeared in that one game). He also has his fully-charged, level-four whip which has incredible range and pretty solid power. Eric, meanwhile, shows up in his kid form (inspired by his appearance in Castlevania: Judgment, and he comes equipped with more standard vampire hunting sub-weapons, like a traditional cross. Being a young kid, he also takes the place of Maria for the sake of exploration and fitting into tight spaces. 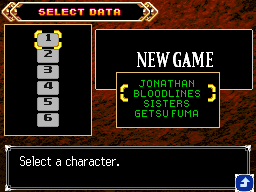 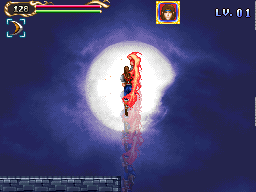 Playing as the two is a lot of fun and they make for a solid alternate option to Richter and Maria. Frankly these two make more sense as inclusions in Portrait due to their natural connection to the storyline. I get that Richter was there because he was used as the "spirit of the whip" in the main game, but Richter Mode always felt like an odd inclusion to me. A John/Eric mode simply makes more sense as a bonus mode in the game and would have worked as a nice nod to past continuity had they been in the original title.

That being said, this is just a bonus mode so don't expect big changes. Although they are more than a cosmetic swap for Richter and Maria, John and Eric still share the same default adventure all the bonus characters have to go through. Essentially, if you're sick of the vanilla castle and want to see something more, this hack won't sate that need. The two characters are cool, and it clearly took a lot of work to include them, but it would have been nice to see a little more variety thrown into the game to really spice things up.

The same can be said for Getsu Fuma as well, but I was actually much more entertained by his inclusion. Fuma is like the anti-Axe Armor, fast and lithe and stupidly over-powered. His basic sword attack does good damage, and he can also do a spinning sword attack as his double jump (and it can multi-hit everything, including bosses). He has two pretty decent sub-weapons to choose from, and even a special sword-tech combo you can perform (for even more damage). While he does still have to scale through the vanilla castle the experience feels so different from anything in the default game that I found myself enjoying it all over once again.

What I really wanted, though, was something more than just a vanilla experience, though. Although i wasn't a fan of the challenge found in another of creator Serbagz's hacks, Castlevania: Dawn of Dissonance, that game not only slapped new characters into the hack but also changed up that game's castle. I can't help but wonder what Serbagz could have done with Portrait since he'd done all this work for the characters. Making John and Eric the main team to explore with a remixed castle would have been cool. A lot of work, sure, but the creator is capable of it. This feels like a solid enough effort on the characters but anything, even some mild changes to areas, would have gone a long way towards refreshing this experience even more. 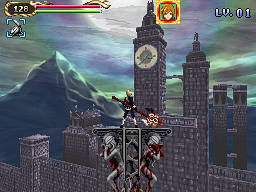 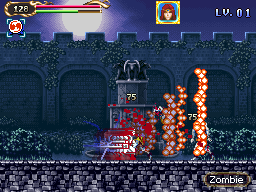 There's potential to a revisit of John and Eric, giving them their own game with a variety of equipment and items to find. This hack doesn't provide that experience but I think it does point the way forward. Castlevania: Portrait of Ruin - Progenitors is an interesting character hack but what'd really neat about it is the potential it highlights going forward. Someone industrious could add new characters into one of the DS games and really make a cool new adventure. This game is good enough but that potential title could be truly great.