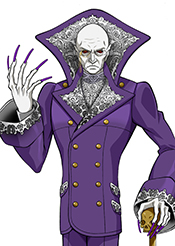 Through the coruse of the Castlevania series there have been plenty of villains that have served at Dracula's right hand. Carmilla, Death, Shaft, and on and on. Each has pledge their life, and their power, to ensure Dracula's eventual return and success in ruling the world (the later part has yet to happen).

And yet while its assumed there are vampires and demons outside of Dracula's control, very few of them are shown to stand in opposition to the Dark Lord. So far, only one vampire has ever worked at cross-purposes to Dracula: Brauner, vampire lord (and avid art fan). Along with his two (adopted) daughters, Brauner wanted Dracula's power but never wanted Dracula to rise up.

Of course, his actions eventually lead to Dracula's resurrection anyway, so maybe he should have rethought that whole plan.

Brauner was a vampire lord, one with a long and gory life. However, during World War I (a war at the very least worsened by Elizabeth Bartley's machinations in 1917 AD), Brauner's two vampire daughters were killed, leaving him bitter and alone. Blaming Bartley (and her uncle, Dracula), Brauner plotted his eventual revenge.

Firstly, he kidnapped and brainwashed the two daughters of Eric Lecarde, stell and Loretta, and turn them into replaements for his lost daughters. He then moved into a recreation of Dracula's castle he devised. When Eric came to the castle to save his daughters, Brauner killed the man and sealed his soul in the castle where, he expected, the hero's ghost would reside for all eternity. The castle also sealed Dracula's power away, thus ensuring that his two biggest threats (hero and villain) were neatly disposed of.

What Brauner didn't expect was that two younger heroes, Johnathan Morris and Charlotte Aulin, would come to the castle in an attempt to defeat the vampires within. Soon enough, Brauner's "daughters" were freed and the heroes were knocking on his chamber door. The battle was fierce, but they proved too much for the vampire lord. Before he could unleash one last attack, though, Death swooped in and killed the vampire, freeing his power and ensuring the resurrection of Dracula. In the end, Brauner's plan was for naught (although he would have liked the bit where the heroes went on to kill Dracula and Death afterward). 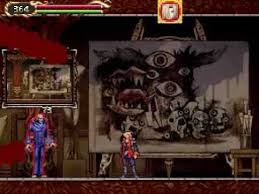 Although nominally the main antagonist of Portrait of Ruin (at least until Death and Dracula take over, of course), Brauner is relegated to playing sidekick to his older brother, Orlox, in Lords of Shadow. Here, Lieutenant Brauner leads Olrox's army of vampires, commanding them from Wygol Village. Gabriel encounters Brauner at the village and, after doing battle with the winged demon, kills him in a most bloody fashion before trudging onwards in his relentless fight.

In Portrait, Brauner will start (normally) by painting the screen in two long slashes -- this paint will damage the player but can be cleared with attacks. He can then splatter damaging paint at the heroes or summon paintings that will spew enemies (that will also cause status effects if touched). Finally, he can also enter his paintings to fly around the room in an attempt to damage the heroes.

His fight in Harmony of Despair is nominall the same. Of course, you'll have a larger party with you if you played it online, and, if you're in Hard Mode, he'll have more health (and stronger attacks) to use against you.

In Lords of Shadow, you first have to take on a number of Brauner's minions before the boss battle can begin. Once brauner reveals himself, you'll have to dodge regularly to avoid the demon's ground-based wing smashes and claw slashes. Occasionally he'll also summon his sword and throw it at the hero -- catch it and Gabriel will throw it back, damaging the vampire. He can also change into a horde of bats to teleport around the boss room in an attempt to strike at the unsuspecting hero. Do enough damage and you'll be pulled into a quick time event to get Gabril to rip off the demon's wings.

At this point the vampire is now in his desperation phase., relying more on his sword slashes since he no longer can do his wing smash attacks. Once enough damage has been done, you'll enter another quick time sequence. Gabriel, with your help, will stun the vampire, strike the vampire's sword into its head, cut off his hand, throw him to the ground, and impale him on his own blade (before walking away like a bad ass).

Fan theory is that Brauner is based on Victor Brauner, a French-Romanian scultpor (1903-1966) who was alive when the events of Portrait would have taken place (1944). This is a good fit for the vampire character, as both were artists (and the date and names tend to draw a naturaly connection).

The design for Brauner, though, is a lot like that of Count Orlok, the villain of Nosferatu (who was also the inspiration for Count Olrox in the Castlevania series). Of course, this also lines up with Brauner's actual life as that movie nominally took place in the "present", which was 1922 at the time.