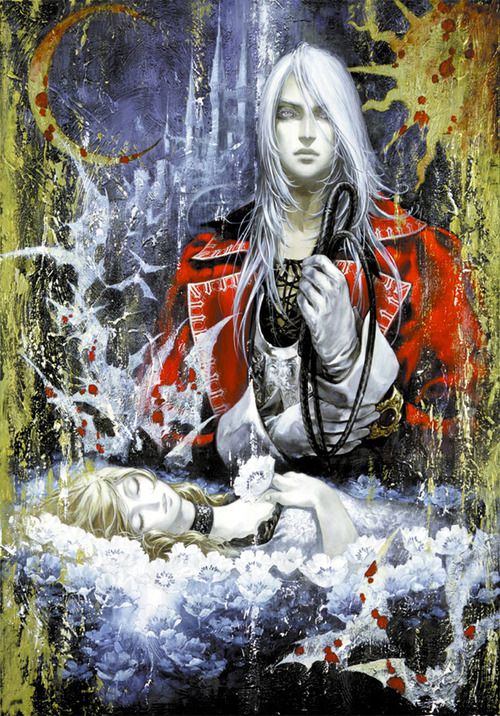 It had been nearly 50 years since the Belmont clan had defeated the evil fiend Dracula and the countryside has settled in a peaceful existence. When Dracula had been defeated by Simon Belmont, the vampire hunter had burned the demon's body parts and committed the vampire's soul to Hell. The villagers figured that meant the vampire was gone for good, and the 50 years of peace indicated that... or so it was assumed. Of course, were the vampire to rise once more, the duty to defeat the demon would befall Juste Belmont, grandson of Simon and possessor (at the time) of the clan's fabled magic whip, the Vampire Killer.

While training one day, Juste encountered an old friend, Maxim Kischine. Maxim had left two years earlier to go on a training mission -- Maxim was also a vampire hunter, but he was also just a little bitter that his friend inherited the Vampire Killer as Maxim felt he was the better warrior-- but then the hunter returned suddenly and without prior announcement. Maxim suffered from amnesia about the previous two years but he did come with a warning: their mutual friend, Lydie Erlanger, had been kidnapped. Although he questions where Maxim had been and what was going on, he agreed to follow Maxim and the two hunters went out to the spot Maxim had last seen their friend: a mysterious castle that had just suddenly appeared out of the mists.

While Maxim waited at the gates, healing, Juste went inside to find his friend. What he found inside, though, was much more than he could have expected: Juste was in Dracula's castle, the creature of chaos that heralded the Demon King's return. As Juste explored, though, he learned that Dracula had not yet returned; instead someone else had brought the castle back for unknown purposes. Whatever their intent, Juste knew he had to keep exploring as the appearance of the castle foretold the eventual resurrection of Dracula, and that was something Juste had to prevent at all costs.

As it turned out, the castle had been brought back by Juste's seeming ally, Maxim. Maxim had gone on his training mission wanting to prove himself, and the best way he thought to do that was to redo what Simon had done so many years before: unite Dracula's body parts and destroy the beast once and for all (of course, if that had worked the first time -- ignoring the events on 1699 AD -- then Maxim's actions already weren't needed). The fame Maxim felt he would get from that feat would overshadow Juste's accomplishments, proving that it should have been Maxim, and not Juste, that should have the clan's whip (even though Maxim wasn't part of the clan).

Sadly, Maxim was not strong enough to ward off Dracula's presence. When the hunter found all five body parts and reunited them it summoned the soul of Dracula who immediately took possession of Maxim's body. This had the effect of splitting Maxim's personality in two, a dark and a light side. The dark side desired to ensure the resurgence of the castle and setting the stage for Dracula's full and complete resurrection. The light side, meanwhile, was Maxim's own personality, a dear friend to Juste who was horrified at his own actions even as he was powerless to stop himself.

A Juste explored he found he had to battle his way through two versions of the castle, one to reflect each side of Maxim's mind. Eventually he came face to face with the Dark Maxim, who was holding Lydie as a hostage. Juste realized that the only way to save at least one of his friends was to fight this twisted version of his ally, so he took Dark Maxim on in a climactic confrontation. Battling Maxim, Juste would have killed his friend if he had to, but Maxim snapped out of it and shook off the presence of Dracula, casting aside the dark magic of the evil demon once and for all. He grabbed Lydie and promised to keep her safe while Juste faced off against the final danger of the castle.

The Dark Lord, in a wraith-like form, knew that his plan to use Maxim as his new host had failed. He thus attempted to destroy Juste, hoping that the blood of his sworn enemies would fully resurrect him, body and soul. Juste, however, was able to defeat the wraith, banishing it back to the nether realms once more. The castle crumbled, lacking Dracula's presence to keep it whole, while Juste escaped outside. There he rejoined his friends, Maxim and Lydie, for a celebration of the defeat of the evil as well as the reunification of their friendships.

Juste is Simon's grandson and natural heir to the whip. Why Maxim felt he had any claim to the whip is not made clear. One could assume he just felt he was the better warrior and had a claim to it for that reason. As the previous game in the series (Circle of the Moon, released in 2001) proved, greedily desiring the Vampire Killer only makes it more likely you won't get it, and even more likely you'll be taken over by Dracula's dark powers instead Essentially, the series is telling its characters to, "stay in your lane."

Part of Juste's power comes from the Belnades clan. The implication is that he inherited this power from Sypha Belnades, wife of Trevor Belmont. This gives the hero the ability to fuse magic with his sub-weapons, creating powerful combos to get him through the game.