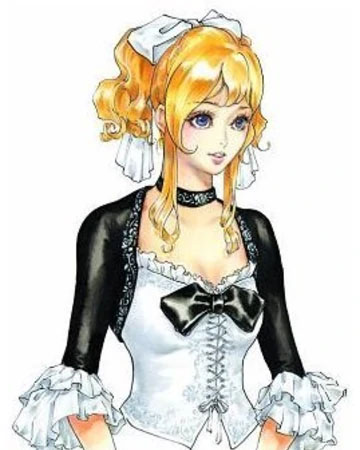 Early in the history of the Castlevania series the heroes were motivated by nothing more than the need to protect the world from evil. Dracula was a bad dude (despite am aggressive PR campaign to the contrary) and the Belmont clan had to defeat him lest the nasty vampire destroy all of humanity. It's a simple quest -- man vs monster -- but an effective one. But as the game series grew more motivation was apparently required for the heroes; they couldn't just go to a castle to stop evil, they had to have a story, and a quest, and some kind of hook to get there.

That's how Castlevania: Harmony of Dissonance ends up with its story: hero Juste Belmont ends up at Castle Dracula when it appears mysteriously once again, but he can't just go in to find the evil he also has to save his best friend, Lydie, who has been kidnapped and taken there by one-time friend Maxim Kischine. It has to be about more than just stopping the monster, Juste has to be motivated.

You have to feel for Lydie, though, as her role is to act as little more than the Princess Peach of this quest: the damsel at the end of the castle to be rescued. And, yes, she is a love interest for Juste, at least if we go by the "best ending" (achieved if Juste collects all the pieces of furniture in the game -- have we mentioned how weird these games get sometimes?) whereupon at the end of the game we see Lydie put her head on Juste's shoulder to signify their potential love. Lydie get to fill the role of so many ladies in video game (and, frankly, Hollywood) history.

Friends from a young age, Lydie, Juste, and Maxim were constant compatriots. But where Juste was destined to be a hero, Maxim grew to be jealous of his friend. He wanted to be the hero but, even more, he wanted to win the hand of their lady-fair, Lydie. So he went off to train, to be the best, to show the world that he, and not Juste, was the one that should have all the fame and glory and be granted to right to wield the Vampire Killer (this despite it being an ancestral whip wielded only by Belmonts at the time). His greed and hate lulled him into being the perfect host for Dracula's dark energy, tainting the wanna-be hero's soul.

Returning home, Maxim arrived "just in time" to find that their friend, Lydie, was missing. At the same time, Dracula's Castle had appeared at the top of the Borgo Pass, and Juste suspected that the events were connected, that Lydie might very well have been kidnapped. Maxim agreed, swearing he saw a demon of some kind fly off with the girl. The two heroes went to the castle to investigate and not only defeat Dracula (assuming he was in the castle) but also find their missing friend.

Maxim, though, wasn't telling the whole truth. His memory was corrupted, the dark energy of Dracula flowing through him, and he'd been the one to kidnap Lydie, not some demon. This all came out eventually, as Juste explored the castle. Maxim had hidden Lydie away within, apparently having bitten her while in a vampiric form, potentially making her into a new "Bride of Dracula". But in a furious battle between the two, Juste reminded Maxim of their friendship and the corrupted hero was able to throw off the taint of evil. Dracula was free of the hero, but stuck in only a spectral form, leaving this shade of evil to fight Juste while Maxim grabbed Lydie and escaped from the castle.

Once Juste had finished off the half-alive mangled shade of Dracula, he two fled, joining his friends outside. The castle crumbled as they watched, but Lydie barely remembered anything about her time in the edifice. She just knew Juste had saved her and she thanked him for it, sealing a bond between the two that would grow into a love-filled relationship.

With the best ending achieved, Lydie and Juste are implied to get together, presumably making Lydie the great-great-however many times removed-grandmother of many heroes in the series to come.