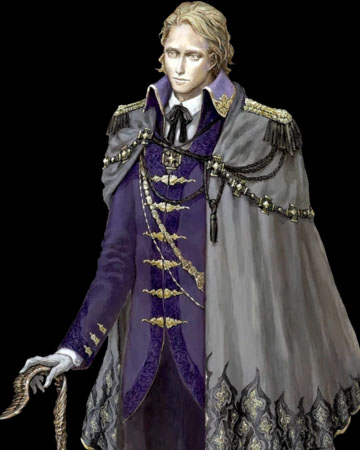 There's a history in the Castlevania series of taking elements from Bram Stoker's novel, Dracula, and bringing them over to the games. This started with Castlevania: Bloodlines, making one of that game's heroes, John Morris, the son of a character from the book, Texas Quincey Morris, although it could be argued that even the original Castlevania had an eye towards the original vampire works, too.

Seward, from the mobile title Castlevania: Grimoire of Souls, is another example. As with fellow compatriot Lucy Westenra, also from this mobile title, Seward clearly derives his name from a character in Bram Stoker's story, that of the psychiatrist John Seward. His role in the game is different from the novel (as is the case with Lucy, point of fact), but there's no denying the basic connection of the names.

In the game, Seward is the head of the organization keeping watch over the titular grimoire, that organization being the Elgos. Their goal was the keep the book, and its ilk, safe and out of the hands of evil that might try to take this time-controlling tomes and use them to change the very nature of history. That said, the last time we saw a supposedly good organization controlling magic tied to Dracula was back in Castlevania: Order of Ecclesia, and the leader of that group, Barlowe, ending up being in league with Dracula. Something tells us, the editors of The Inverted Dungeon that Seward was headed for the same fate.

Not that we'll ever know, of course, as Konami pulled the plug on Grimoire of Souls while it was still in beta, with only five of the planned eight chapters released. Whatever plot was meant to unfold, what characters would have done and whole would have truly proven to be good or evil, is lost at this point. Maybe someday a leak will inform us of all the details, but until then Sewards full story is gone, leaving fans of the series to only guess at what could have been.