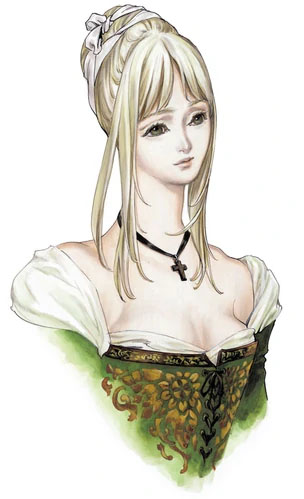 Early Castlevania games weren't necessarily known for their stories. While the instruction booklets for the games did have their share of stories in them, most of those booklets were of questionable quality and sometimes even contradicted what was seen in the games themselves. The few character beats that we got from any game were what had to sustain us, but considering the action, music, and graphics in the games were great, it was generally enough. A game, though that was able to deliver a bigger story on top of all the series mainstays would have been special, indeed.

One game did manage to accomplish that, although sadly it didn't make its ways to Western shores for two decades after its initial release: Castlevania Dracula X: Rondo of Blood. The game gave us a new hero for the series, fashion-forward icon Richter Belmont, and a story to motivate him: the kidnapping of his beloved Annette, one of four girls kidnapped from villages near Dracula's Castle. While Richter, being a hero, would have gone to defeat Dracula regardless, the kidnapping of his sweetie does lend some urgency to his quest.

Interestingly, for a while Annette's exact place in continuity was a tad confused. Beyond sometimes being called "Annett" instead of Annette, she was, at times, attributed as the sister of Maria Renard -- this is the reason we list her last name as Renard. This came from Castlevania: Dracula X, the SNES remake of Rondo of Blood. There she's described as Maria's sister, a connection she didn't have in the original game (no in its PSP remake, The Dracula X Chronicles. Officially, as per one-time series lead Koji Igarashi, Annette is not Maria's sister as Castlevania: Dracula X sits outside the main continuity.

Of course, we would also point out that Annette is mentioned, by Maria, in sequel Castlevania: Symphony of the Night, and there Maria does acknowledge her as a "sister". Of course, by that point Richter and Annette were to be wed, and Maria, who had adopted Richter as her brother, could have thought of Annette as a "sister". These are the confusing connections you get when a game series is produced by multiple people over the years.

For all those reasons we list Annette with the last name of Renard, even though it's an adopted name and, as of right now, denote a familial connection that doesn't properly exist in the series continuity. 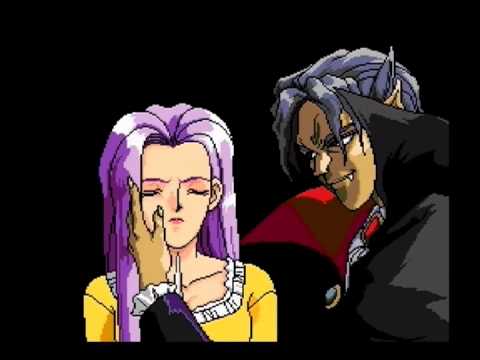 After nearly a century of peace since the last time Dracula had been defeated, the demon's evil castle once again appeared on the Wallachian countryside. Around this same time, multiple girls from around the countryside -- not just Annette but also Maria, Iris, and Tera, and probably many more -- disappeared, presumed kidnapped by the dark priest Shaft. Using some girls as sacrifices in his Black Mass ritual, the evil sorcerer was able to resurrect Dracula, the blood and souls of these girls serving as a lifeline to the defeated vampire.

Annette wasn't just some girl, though; she was also the lady love of hero Richter Belmont. Whether Dracula and Shaft knew of this connection originally or not (which we'll discuss below), Richter felt particularly motivated to enter the castle and defeat the evil vampire, rescuing the lady fair in the process. He battled his way through many dangers all to try to find a way to Annette, finding the other lost girls on the process, each of whom aided him, at least in some small way, in his quest.

While Richter searched, Annette was secluded into a cell high in the Clock Tower. There she was visited by Dracula who, having taken a shine to the girl, tempted her with eternal life if only he'd let her feed from her lovely flesh. She rebuked him, though, declaring her love for Richter and holding out for a time when he would come and save her (as she knew he would). And, sure enough, hours later the hero arrived, key in hand, to save his love and take her from the castle. Freeing her he sent her outside the castle, using the path he had cleared through the monsters and devil, so she could wait in the relative safety outside the castle. He, meanwhile, went deeper in to take on Dracula and rid the world of his evil once again.

Finally, once the demon was defeated, Richter and Annette were truly reunited outside the castle. She shared their love for one another and made a vow to always be together from that day forward.

Depending on the game you play, Annette's connection to Richter may or may not be known by Dracula and Shaft. Rondo of Blood makes no indication of the matter, for instance, but in the Dracula X Chronicles, which has superseded Rondo in the official continuity, Dracula knows full well that Annette is being courted by Richter, making her kidnapping an act of revenge against the Belmont clan that has battled the demon all these centuries.

It's also worth noting that saving Annette is technically optional, although if you skip her you don't get the best ending of the game. Certainly saving her is the outcome in continuity (as reflected in references in dialogue in Symphony of the Night). Notably, in some versions if you don't save her then Annette does, in fact, give in to Dracula's offer to become a demon. Then, at the top of the Clock Tower, you end up having to face the now-vampiric Annette (instead of whatever other boss would be up there instead). It's a nice twist, and adds a bit of extra depth to the games.

Annette later reappears, resurrected by the Grimoire of Souls tied to 1792 AD. There she was possessed Carmilla, made into her vampire slave by the dark countess. Within the book Carmilla had Annette as her hostage (replicating elements of what happened in the past) as she guarded the vital soul the heroes needed to recover. The heroes had to climb their way to Carmilla's chamber, though an underground recreation of Castle Dracula, before they could confront Carmilla and Annette in the countess's ballroom.

Once Carmilla was defeated, and Annette was freed, Dark King Soma arrived, stealing the vital soul before the heroes could reclaim it. Even after a pitched battle with this foe the heroes were unable to regain the needed soul, forcing them to leave the book to search elsewhere for the elements they needed.

Grimoire of souls is a mutli-episode game released for mobile phones. Each adventure in the game featured chapters taken from other games in the series, such as this episode and its recreation of sections of Rondo of Blood. 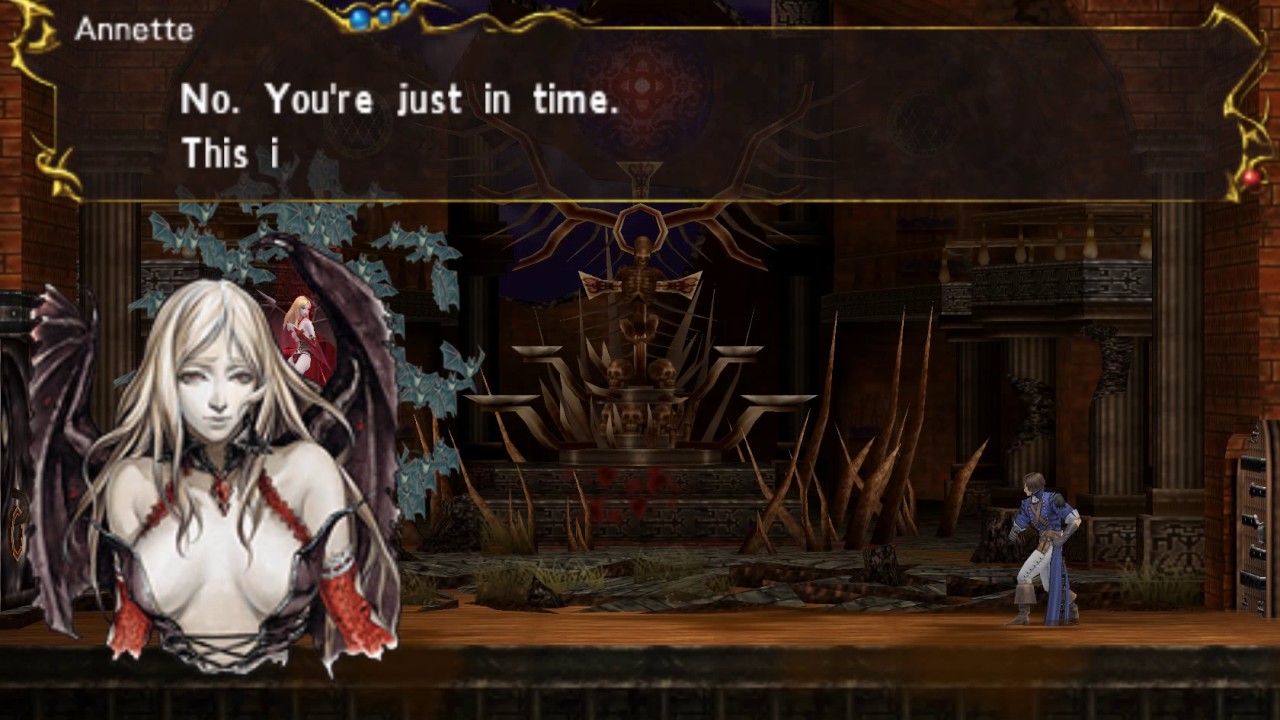 If you don't save Annette you then have to fight her at the top of the Clock Tower. This fight comes in two forms depending on which version of the game you play. In Castlevania: Dracula X, failure to save Annette then puts her at the top of the Clock Tower. There she becomes possessed by an evil skull and, essentially, becomes that game's version of Carmilla. She'll ride atop the giant demonic skull, dodging your attacks. The eyeballs of the skull will fly out at you, sometimes homing in on your location, sometimes alight with fire, and sometimes casting lightning bolts at you. It can be a frenetic battle but good pattern recognition, and quick dodging, will be your friends here.

Meanwhile, in the expanded remake, The Dracula X Chronicles, Annette gets her own, proper fight not mirrored on Carmilla (largely because Carmilla has her own battle with the hero earlier in the game). Here, when the heroes first encounter her, Annette is on the floor of her chamber, waiting for the heroes (a la your encounter with her in Dracula X. After complaining about how late the heroes have been and how she feels betrayed, she'll float into the air, surrounded by bats, revealing herself to be the very Succubus-like "Little Vampire". She'll use her bats in a form not unlike the Bat Company from Dracula X, summoning them in various forms.

The bats rain down in six angled-out columns or come in as six columns towards the exact point the hero is (or was) standing at when summoned. They can also spiral out from the vampiress, creating a swirling pattern the heroes have to dodge, and she can cast them out in a spear like move towards the hero. Plus, the bats can surround Annette as a protective shield, blocking all attacks. Thankfully, Annette announces each and every one of her attacks, so once you're familiar with her tells and what she says, this battle becomes significantly easier.

Annette is forced to battle the heroes once more in a play on the classic Carmilla fight, this time in Castlevania: Grimoire of Souls. Carmilla arrives in her Dracula X appearance, but instead of being aided by Laura (her normal vampire sidekick) she has Annette Renard as her aid. The fight is still fairly similar, with Carmilla floating around on her giant skull while Annette walks the ground, attempting to grab the hero and drain their blood. Carmilla will shoot out purple orbs of energy, that was fly directly where the hero is standing, and she can drop pillars of bloody flames onto the ground.

Once her energy bar is depleted, Carmilla was disappear into a bloody mist before re-emerging from a pool of blood, her health mostly restored. While she flies around once more, Annette is turned into a vampire maiden. The two will then start teleporting back and forth with each other, with Annette summoning bats that will fly out and at the hero while Carmilla will summon bloody orbs that will fly out and explode in arcs and waves of blood that will travel along the ground. is part of the battle is frenetic but can be handled well if you're careful. Deplete her health bar a second time and Carmilla will finally go down and Annette will be freed.