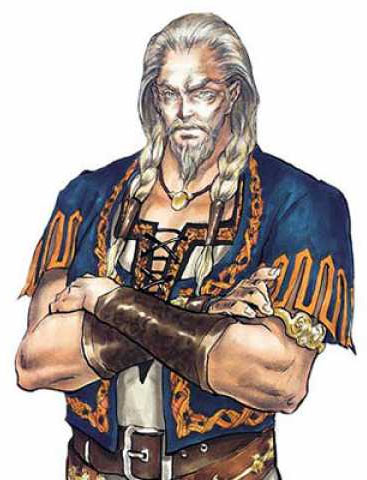 Every Castlevania game, at this point, needs a shop. With the move to Metroidvania titles as the primary game style in the series, shops became a vital part of the experience. Players need a place to purchase items and upgrade their gear, to feed that RPG loop that drives so many of these games. Shops, in short, are essential to Castlevania.

Over time, though, the games have also started to integrate story into their shopkeepers. whole the early shopkeeps were nothing more than NPCs dotting the world, and even the Master Librarian did little more than sit in his chair and refuse to buy items from you, later shopkeeps were integrated into the game to provide color and story, such as Julia Laforeze in Curse of Darkness.

Rinaldo can be viewed as the turning point in that respect, as he's not only a shop keeper in Castlevania: Lament of Innocence, but his story influences, and is influenced by, the hero of the game, Leon Belmont. This creates a hook to the character that makes him seem like more than just a thinly veiled store front. He becomes real, and realized, making the world of Lament of Innocence feel more full.

Five years prior to the events of Lament of Innocence, Rinaldo was but an alchemist, working away in his shop as he perfected ways to fight the undead. His life changed, though, after the evil vampire Walter Bernhard captured Rinaldo's only daughter, Justine, turning her into a vampire. Having turned the girl to evil he sent her back home whereupon she killed Rinaldo's wife and son, feasting on their blood.

Horrified at what his daughter had become, Rinaldo crafted the Whip of Alchemy, a weapon he charged with magic so it could destroy vampires. He used it to kill his daughter, freeing her soul from the demon that claimed her body, then he charged off to Castle Bernhard to take out the vampire lord. But while the whip was able to destroy Justine it had no effect on the master vampire.

Laughing at the alchemist's misfortune, Walter let the sad old man flee the castle and set up shop outside in the forests. Rinaldo's aim was to help any hero that went to the castle to defeat Walter, hoping that where he failed someone else would succeed. Walter let this go on as, he thought, it made the "game" of heroes and villains more "fun". Eventually, though, Walter pissed off the wrong person, Leon Belmont, capturing that heroes fiancee, Sara Trantoul, and hiding her away in his castle.

Naturally Leon came to the castle to find his lost love. Sensing the great bravery of the hero, Rinaldo gifted the Whip of Alchemy to Leon in the hopes that he would somehow find the power to use it and kill Walter. During his adventure in the castle he did, in fact, find Sara and helped her escape the evil castle's walls. Unfortunately she'd already been bitten by the vampire and was turning. Through the power of her sacrifice, granting her life so that Rinaldo could charge the whip, the Whip of Alchemy became the Vampire Killer, a weapon that would go on to destroy vampires for centuries to come.

Leon did kill Walter with the whip, avenging his dearly departed and giving everyone else who had suffered at the vampire's hands some kind of peace. But while Leon would go on the found the Belmont clan of vampire hunters, Rinaldo faded off into the land, never to be seen again.

It's noted in the game that, at some point in his own adventure into the castle, Rinaldo must have fought the Succubus. The dream demon makes mention of this (although when this battle exactly took place is open to debate among fans -- we at The Inverted Dungeon, for instance, think it must have been during his initial dive into Walter's castle). What is assumed is that Rinaldo didn't kill the Succubus because, using her powers, she took on the guise of Justine and the alchemist stayed his hand.

While Rinaldo never shows up in the main series again, a descendant of his, Giovanni, appears in a very minor role, advising the heroes of Castlevania: Order of Shadows. Of course, that game isn't in the proper continuity rendering this connection tenuous at best.

Meanwhile, a version of Rinaldo is mentioned throughout the Lords of Shadow sub-series. There Rinaldo was an alchemist and weapon-maker (as in the main series). After his daughter was kidnapped by vampires, Rinaldo left the Brotherhood of Light (where he made their weapons) in search of his lost little girl. He hid his vampire hunting weapons throughout the world to aid other heroes that found them, and that includes the Combat Cross and Vampire Killer that the heroes of the games end up collecting and using.

There has been some speculation that Laura in Lords of Shadow could, in fact, be Rinaldo's daughter, but that hasn't been confirmed. And, as in the main series, Rinaldo disappears on his journey, leaving a mystery as to what happened to him and where he went.