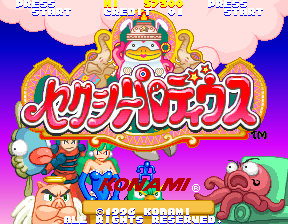 As we noted in our discussion of Jikkyo Oshaberi Parodius, the fourth entry in the Parodius series, tat game felt like a stop-gap measure to mark time between bigger arcade entries. The third game, Gokujo Parodius!, was a massive effort, but the fourth title, put out only on consoles, felt like much more of the same. You got the feeling like the developers had big ideas they wanted to follow but they had to meet deadlines and get a game cranked out in 1995, this the middle title.

Middle, and midling, it was, too, so the hope would be that with the fifth game in the series, Parodius would find a return to form. For this entry, Sexy Parodius, it's a mixed bag as to whether they designers really hit that mark or not. The game does change up a lot of the basic material, throwing out most of the playable heroes from the previous games for a new crop of shooting warriors (and a returning Vic Viper). That alone meant a whole host of new ships to get used to with all their special powers and abailities.

More important was the new setup for the flow of levels. Instead of a simple, linear structure, Sexy Parodius shifts to a mission based structure. As the player goes through stages they'll be given goals to meet. Completely those goals (ranging from shooting specific characters or objects as they pop up) and you'll move on to one mission. Fail, though, and you'll get a different mission as a follow-up. It's a neat idea in theory and, for those that enjoy the game play of this fifth title, does add some needed variety and replay value.

With that being said, you have to really be into this series to care about the changes and feel like they were "enough". As casual players of the series, and shoot-'em-ups in general, we found that the basic game play of the series hadn't changed enough in this title to feel fresh or interesting. The game did give you more to do but it was more of the same, another staid entry that didn't do quite enough to innovate.

Clearly we aren't the only ones to think that as this was the last mainline game in the Parodius series released. After this Konami would only put out one more game, Paro Wars a year later, which was a tactical sim game very different from the previous entries. Then the series would lay dormant before gettng a reboot into the Otomedius (featuring even more sexy girls than this title). And even that was short lived.

That's the issue facing the third of these back-to-back titles (and the fifth in the series overall), Sexy Parodius. After the previous game had avoided arcades, releasing only on home consoles, one would have expected that a return to arcade form would have precipitated a big new revolution for the series. Instead we get another solid entry in the franchise that doesn't really have a lot of big new things to add to the series.