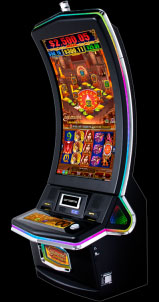 Konami making gambling machines based on the Castlevania franchise is nothing new. The company has been putting out gambling titles featuring Castlevania characters, at least in Japan, since 1993 with Wai Wai Bingo. Over time, as the technology has become more sophisticated, these gambling games have become slicker looking, with increasingly more options added into the mix. But they are all still gambling machines at their core.

Three years later, Konami then released a new series of pachislot games, these built on a new platform (so not simply yet another re-skin of existing machines), the Concerto Crescent system. The company has close to 40 games built on this platform, most of which aren't Castlevania themed, but four titles were released in this series, as built along the same lines, and released out to the world (both Japan and the U.S.) from 2018 onwards (it is presumed these games were released one at a time over a span of months, or longer, but most release dates peg all the games for a vague "2018"). These titles are: Castlevania: Labyrinth of Fire, Castlevania: Labyrinth of Love, Castlevania: Ring of the Heavens, and Castlevania: Valiant Guardian.

We talk about all four of these games together as, from everything we can find Online -- official statements from Konami, snippets video released by the company, footage taken by players as they try out the machines -- the games seems to all be pretty interchangeable. Despite two of them sharing "Labyrinth" in the title, all four seem to be the same base game just with slightly different tweaks to the game. They all (from what we currently know) feature Hector going on a parallel quest to Castlevania: Curse of Darkness all in an effort to take on, and defeat, Dracula (for cash and prizes).

The games are progressive pachislot machines. Players will buy "tokens" in the machine and then, on the huge touch screen that takes up the entire main body of the game, be presented with moving animation up top while three reels appear below. As the player spins the reels (five digital reels with three lines at the start) they'll win based on various combos and lines known to the machine. Win enough, or hit the right combination of slots, and more reels could unlock (up to the machine filling the entire screen with reels) for a limited time.

As the machines are "progressive" in nature, that means that, over time, a bonus crystal will fill. Once the crystal is full it will break and a bonus game, for even bigger win potential, will unlock. Depending on the machine this could see chibi-hero Hector travel along a path to Dracula's castle, fighting bats and winning coins, or they could move around a board game style square (that, we assume, is meant to represent the castle's courtyard), landing on the squares in hopes of hitting the big bonus. In both cases, the bonus round will lead to a fight against Dracula and his minions and, if the player is lucky with the slots then, big cash will be won.

Functionally this isn't much different from the previous pachislot games the company produced between 2009 and 2017. The production quality is slick, and the full-body touch screen certainly makes for an eye-catching machine. But functionally the game hasn't evolved much since the first Pachislot Castlevania from way back in 2009. Reviewers of the games in fact (and, yes, gambling machines have reviewers) have noted as much, commenting that the games really could do more to give players variety, or even control over their games, as so much of what these machines do is random chance almost entirely out of the hands of the players. They're flashy, but pretty basic, slot machines with Castlevania theming, and those graphics are the only thing that will make them stand out to fans of the series (especially since, as noted, Konami has close to 40 of these style of machines with various themes applied, all that play functionally the same).

We do wish more was available on the specifics of each of these titles. Other sites have almost no information about the games at all, with Wikipedia not even listing the machines on their full list of all Castlevania media. Hell, Konami barely states more than a few generic bullet points about the games on their company site, so its entirely possible these really are just vague re-skins of a basic machine, all with Hector going through the same motions over and over again. If and when we learn more about the specifics of each of these machines, we'll update this article accordingly.

The Castlevania: Labyrinth Series have no reviews. You could be the first to review them! Contact the staff of the Inverted Dungeon to contribute.