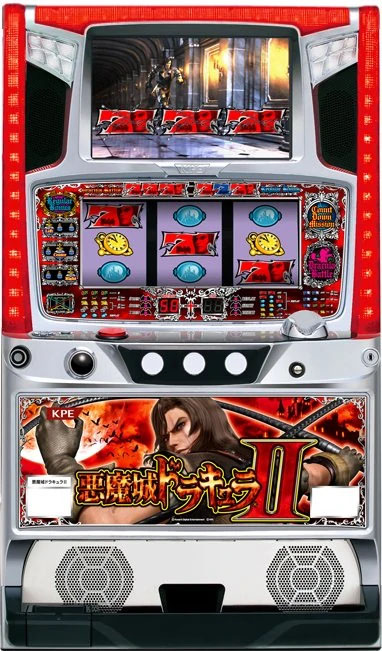 As we discussed over on the overview for the first Pachislot game, this game is basically a three-reel slot machine where the big innovation is allowing the player to control each of the reels with a button press. Line up the symbols on the reels and you win more credits in the game. As a bonus, if you line up the Lucky 7s you open up a bonus mission on the top screen of the game where the player gets to watch a special cut-scene. Winning or losing in the cut-scene is random and controlled by the game, but there was enough variety to keep players shoving in tokens to try for the bonus rounds.

The game this time is focused on hero Trevor Belmont (assisted once again by Church warrior Angela) taking on three of the minions of Dracula -- Dullahan, Succubus, and Wyvern -- before fighting Death and, eventually, Dracula himself. As there's no actual end in the game, the point being to keep the player shoving in tokens and playing the reels, Dracula is never truly defeated, the battle just goes on.

As before, the basic game play of Pachislot Castlevania II probably seems pretty shallow. But for Japanese audiences these kinds of games are quite popular. Popular enough, in fact, to rate a third direct game in this series that came out later the same year.

Pachislot Castlevania II has no review. You could be the first to review it! Contact the staff of the Inverted Dungeon to contribute.