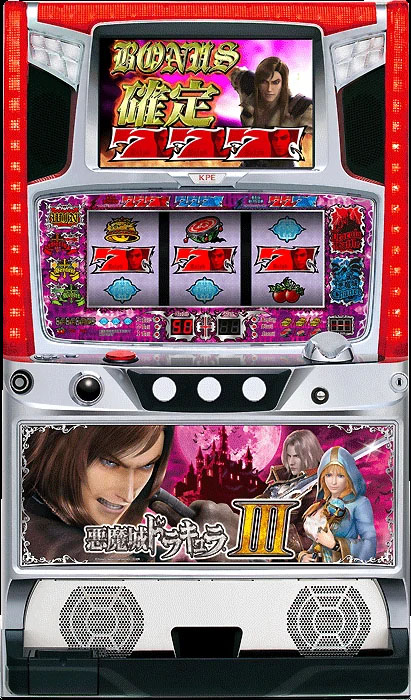 Wow, talk about flooding the market. For almost a decade Konami hadn't released any new, Castlevania-themed gambling machines, and then in short order we had not only Castlevania: The Medal but all three back-to-back-to-back releases in the "Pachislot" series. And like the previous two editions, this third game, Pachislot Castlevania III (titled Pachislot Akumajo Dracula III in Japan, with the "Akumajo Dracula" translating as "Demon Castle Dracula") is the same basic game all over again, just with different art and thematics.

As with the previous two editions, Pachislot Castlevania III is a three-reel slot machine with an additional digital display above. Players are tasked with spinning the reels and then pressing a button for each reel when they want them to stop. Line up the symbols on the reels and the player would earn extra credits in the games. As a bonus, if they got a line up of Lucky 7s they would unlock "Bonus Missions" on the top screen. By now, in this third iteration, you should be quite familiar with the concept of this game.

Like the previous games, Pachislot Castlevania III is light on the story, leaving most of the details up to the imagination of the players. The game is set as a prequel this time, featuring hero Trevor Belmont, aided by his classic allies Sypha Belnades and Alucard, in a battle against Dracula. As this is a prequel, and the previous games were based on assets from Castlevania: Curse of Darkness, this could be thought of as a creative retelling of Castlevania III, although that's probably a bit of a stretch.

Still, this game marked the last game in this little sub-series, at least until the Lords of Shadow spin-off machine released seven years later, so while the games did prove popular, the market was probably too saturated at the time to support any further games in the series for a while. Not that Konami was done with gambling machines, not by a long shot.

Pachislot Castlevania III has no review. You could be the first to review it! Contact the staff of the Inverted Dungeon to contribute.