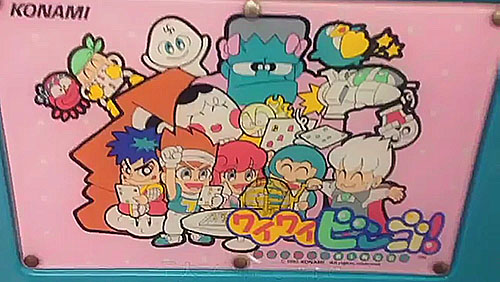 Although we in the Castlevania series lament the fact that Konami has largely abandoned the series on home consoles, putting their focus into Pachislot and Pachinko games in Japanese arcades, something we fans have to realize is that this isn't some big change for Konami; they're always had a focus on Japanese gambling arcades. Although we could probably track down games even further back than 1993, this year saw the release of Wai Wai Bingo, the first of Konami's gambling machines that touched upon the Castlevania series in some way.

Wai Wai Bingo is a "medal game". For those that haven't seen these types of arcade titles, a medal game involves the players inserting medals into a machine to then gamble that money away. There are a few different types of these style of games (which are basically like if you had Western audiences use arcade tokens for gambling which, comes to think upon some of the games at a Chuck E Cheese, isn't all that weird, really). Medal games, and other slot-type titles are very popular in Japan, which whole parlors and arcades devoted to them.

Of course, the trick with these games is that you don't actually play for money, as that's illegal. Instead, as I've heard reported, you get tickets for prizes when win and, once you're picked up your prizes, you can then go to a different store behind the arcade and exchange the prizes for money. So it's basically gambling for cash, just with a convenient workaround.

Regardless of how the gambling system works, Wai Wai Bingo itself is a pretty simple game. You insert your medals, select the best you want to make, and then try to make "bingo" style combos on a four-by-four board. Whatever character you play (including perennial favorite Kid Dracula) will stand below a rotating series of squares. You'll hit a button and on screen the character will then hit their button, stopping the rotation; whatever square comes up is highlighted on the board. Do this four times and if you manages to make any of the winning combinations the game will pay out, you win!

It's a simplistic game without any depth, something to attract eyes with its candy-colored graphics and silly characters. It did prove successful enough, though, to see more Wai Wai entries in the gambling series for years to come.

Of course, finding a working machine now, one that hasn't seen its CRT monitor die and its internal hardware breakdown, is difficult. And if you live in the West (like the editors of this site) then actually playing once of these machines is near-impossible (as they were Japan-exclusive). SO until we can get our hands on an actual machine to see how it properly controls, this is just one of the many Castlevania-related machines we won't be able to review on this site.

Wai Wai Bingo has no review. You could be the first to review it! Contact the staff of the Inverted Dungeon to contribute.