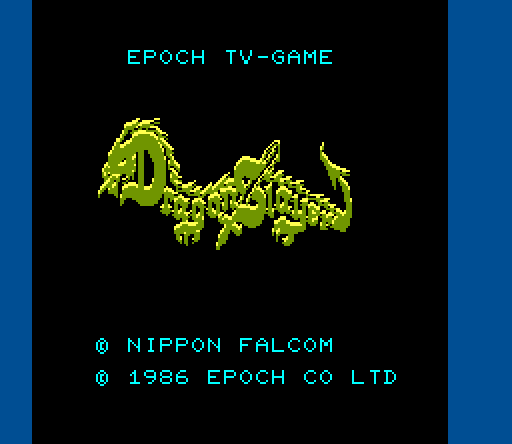 If we want to get into the weeds about what led to the formation of the Metroidvania genre (and this website is all about detailing elaborate minutia), then we have to look at all the formative games that started the cascading domino effect. If The Legend of Zelda was a formative game that influenced the design of Metroid, ad that game then went on to give Konami inspiration for their own platform-exploration games, then we have to ask: what games influenced Zelda. Did Nintendo create their game from a great void? No, of course they didn't, they just refined and redefined what was out there into an even better package.

What came before were games like Dragon Slayer. Developed by Nihon Falcom for the PC-8801 (before being redesigned and redeveloped for multiple other systems by various publishers, including editions on the MSX, X1, Super Cassette Vision, Game Boy, and even later the Sega Saturn), Dragon Slayer is an early example of the action-RPG. You have your lone hero, exploring a world in real time while being constantly harassed by monsters. Fans of the RPG genre should be all too familiar with this concept.

The basics of Dragon Slayer (Doragon Sureiya in its original Japanese name) are simple: your lone hero (who apparently is nameless through all versions of the game) starts off at his little house in the middle of a monster-filled world. As you wander around you'll see those monsters who will move around as you do. You'll also see treasures and items that you can pick up. Any of the basic treasures (and gems) can be carried back to your house to boost your score. Your goal is to explore around and collect as much of the treasure as you can before you die.

Now, your little guy is out there on his own but there are things he can collect to aid him in his quest. There are keys to find that will let him unlock the various treasure chests scattered far and wide around the layout. There are also rings that can be picked up which lets the lone hero push the various blocks of the dungeon around, rearranging the layout of the world (he can also push his house as well, letting him move it closer to wherever he's working). And there are swords to collect which will give the knight the ability to attack (and, as he collects more swords, attack harder and with more power). 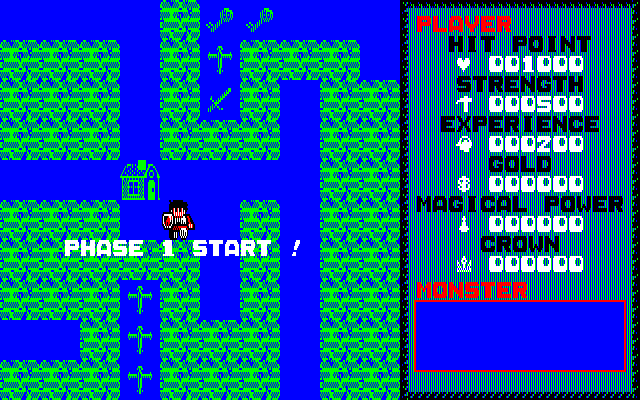 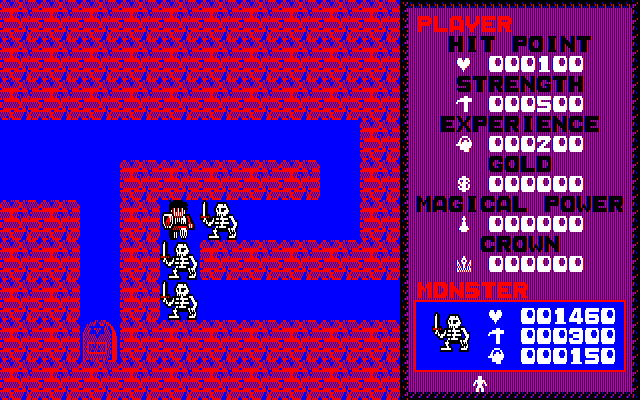 While that's all well and good, the brave hero has one major issue limiting him: he has an inventory of one item. His sword goes in one hand (permanently, so you can't drop it) and whatever else he's holding goes in the other (or, really, off to the side of his head so you can see what he's holding). If you want to collect another item -- swap, say, the key for a gem in a chest -- then you'll have to drop the key to pick up the gem and then take it back to your house to cash it in. The knight is very, very limited.

From there, you just follow the game play loop: walk around, collect coins and gems, drop them off, push blocks around, open new areas, find more treasure, and repeat. While there is technically an end to the sequence of the game (at least insofar as you can play through all the maps in the game, if you play it that long) you may or may not reach it. The game is long, and depending on the version you play also very slow. You may just pick it up for an hour and grind out points, or you may try to see just how far you can get, but the beauty of the game isn't in the destination but the journey.

Feeding the arcade-like buzz of collecting points, the game's entire emphasis is really on just you finding and hoarding treasure. Finding ways through dungeons, avoiding monsters (or killing them so they don't gang up on you), looking for ways through the puzzling layouts, that's all part of the process. This is a game that wants to you to look and think about what your next steps will be, a kind of thinking-person's action game. There is fun to be had simply wandering and exploring, finding treasure and sliding into that game play loop.

With that being said, the game is pretty obtuse about its goals. There's no in-game explanation for anything, it just trusts you'll figure things out for yourself. A ring might let you push bricks but you'd have to pick it up, walk into a brick, and figure it out for yourself. And as far as pushing your house? Well, you'll do that by accident. There's also no attack button, you just hold your sword beside you and smack into enemies. If you're strong enough you kill it. Otherwise you take damage and maybe even die (if you're weak enough). Too bad, so sad, go back to start. 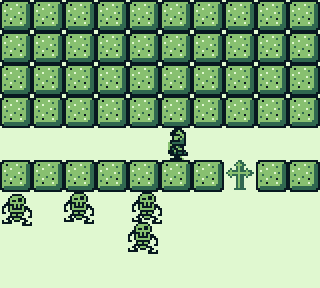 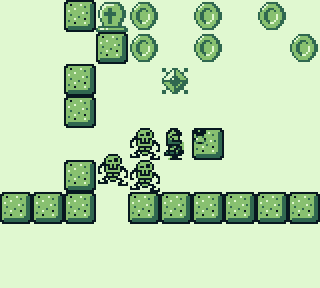 If that sounds unforgiving, and maybe even a little plodding, well this was a game designed back in 1984. Expectations as far as how "user friendly" your game had to be were very different back then. This was a dungeon crawler, through and through, and it was designed to puzzle and vex players. But it did it's job, becoming very popular in Japan as this one title spawned not only countless ports but also a whole series of sequels. Direct sequels, spin-offs, unofficial entries, all of those came from Dragon Slayer, an unassuming little game that, frankly when it came out, didn't even look like much.

And yet the charm is self evident. Even now, pulling up a version of the game (the Game Boy one being especially easy to get up on an emulator, assuming you have a way to do that legally) send you back to a fun time where games could be simpler and the goal much less complex. This little proto-RPG doesn't have the same depth of modern Zeldas or Final Fantasies but you can feel its DNA running through all those games. Thus was a title that ushered in all that was to come, marrying adventure style game play from before with moderate RPG elements to lay the first foundation of what was to come.

Frankly there's very little in Dragon Slayer that will remind you of Castlevania. We're far enough out from Konami's work that basic groundwork is still being laid. If you load up the game and squint at it just right you can see how this game could inspire titles like The Maze of Galious: Knightmare II, but that's a bit of a stretch, to be sure.

No, instead this is a game that inspired games that went on to influence the Metroidvania genre. You can tie a string from this game and see how it connects to The Legend of Zelda and then follow that to all the games that took "Zelda-like" to heart in different ways. Nintendo's creations spawned the Metroidvania genre, but it took a game like Dragon Slayer to show how those pieces could fit together.