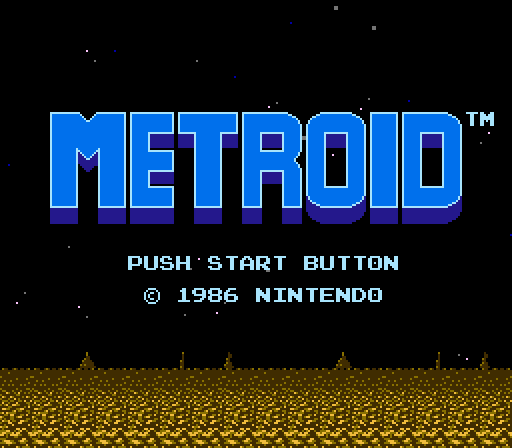 It's hard to talk about Metroidvania games without first discussing the game that started it all (or, if we want to be pedantic about the early roots of the genre, at the very least put the "Metroid" in "Metroidvania"). It's not often that you have a game whose title effectively becomes the name for a whole genre of other games, but that's the legacy of Metroid (titled in Japan as Metoroido). Without this title we wouldn't have an entire genre of games, at least not in the form they exist today, as so much of what to come in the style of "Metroidvania" hinges on this title.

The game is, essentially, a run-and-gun platform-shooter, but to describe it in such simple terms belies what the game is really about. This isn't a platforming game in the style of, say, Super Mario Bros., nor does it fit in with other run-and-gun games like, for instance, Rush'n Attack. Instead it's better to talk about what the game does over what it resembles. It's a moody, sci-fi, exploration-heavy adventure where you never know what might be beyond the next room... or if you've even been in that room before. It's confusing, confounding, and eerie, but that's part of the point: the first Metroid is as much about mood as it its the adventure you're actually on.

Coming at it with fresh eyes, trying to look at it as if you were someone that has no clue what the game is about, Metroid is a slow burn of a title. Your space-suited hero (Samus Aran, who we eventually find out is a woman, but even that detail is hidden from us until the very end of the best play-through of the game) is dropped down to the planet Zebes, a planet acting as the base of the Space Pirates and the evil plans that group is hatching. Samus has one mission: to find the leader of the Space Pirates and eliminate them, no matter what. That's your whole mission and figuring out what to do, where to go, and how to accomplish it is entirely up to you.

Part of what makes Metroid so different from what else was out on the NES at the time (and what makes it so brilliant) is that the goal from area to area is never clear. The whole of Zebes is laid out like a maze, broken up into four chunks but designed in such a way that you'll constantly be going back and forth through some areas, finding a new power-up so you can try to unlock some other zone somewhere else. It's a non-linear with no clear path to take -- no flag post to reach at the end of a level or easily identifiable "zone" you can just simply head towards. Instead the whole of the game is there for you to figure out on your own, a purposefully confounding planet that hides everything from you, waiting for you to figure it out on your own. The planet is there and (until you start trying to get the best ending, at least) all the time you want to take to finish out your mission. 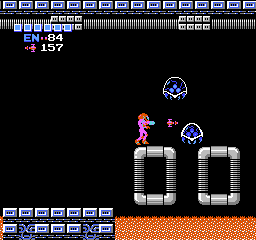 Metroid is not a forgiving game. Players that may have explored later entries in the series (or any of the Castlevania titles in the genre) may be used to regular health increases, healing magic, and save points; very little of that is here in the original NES game. Sure there are Energy Tanks, but a sparing few of them, and the enemies later in the game hit like trucks (even when you're wearing upgraded armor). You can't really heal yourself, instead being limited to the sparing health drops enemies will give you. And don't expect save points anywhere as there are none in Metroid, just passwords to get you started again (although you'll always begin back at that first screen, all the way at the beginning, so you better learn the layout of the planet quick).

You should probably expect to get lost pretty regularly as you explore Zebes; there is no auto-map to save you here and no fast travel to help you find your bearings or get back to areas you recognize. Those are modern conveniences that the original Metroid doesn't have time for (and, admittedly, might have been technically difficult to put in). It's not going to explain to you where to go, it's not going to tell you all the items you need or hint as to what you might need to find. If you want to get to the end of the game and kill the big bad (spoilers: Mother Brain) you're going to have to do it all yourself, start to finish.

Of course, that sense of mystery, the tension you felt every time you went into a new hallway, the game making a constant alert noise because your health was low, that was all part of the charm of the game, the reason you kept coming back. It was hard, but ever time you managed to find a new area you hadn't explored before, or grabbed that next item that opened up so much more of the game, you felt a sense of accomplishment. Yes, death was always just a few bad steps away, but there was no arguing with the sense that you were really becoming the hero of Zebes with the work you were putting in.

It does help that the game felt so very different from anything else out on the NES at the time. There were Metroidvania games to come out later, such as Castlevania II: Simon's Quest, but those games evoked their own ambiance, made their own concessions to the format to try and court their own audiences. Metroid came out of nowhere and dropped its challenge on you. If you wanted to conquer Zebes you were going to have to do it on your own in this weird, wild, sci-fi action game. 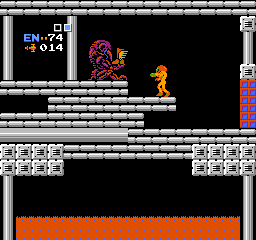 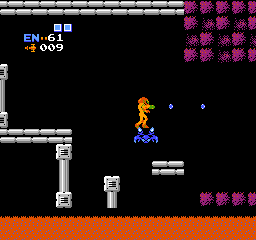 But then, everything that would come after -- the upgrades to the format, the mini-maps, the save rooms, and all the concessions to playability -- are part of what makes this game so different even among its own series. While the second game, Metroid II: Return of Samus is probably the closest to this game in terms of style and unforgiving nature, it also made its own concessions -- healing stations, ammo recharge stations, and, yes, save stations -- that made the game more palatable, in some ways, for the general public. Nothing was quite as rough, or as truly inspiring to master, as this original title in the series. Hell, even the remake of the game, Metroid: Zero Mission, takes a lot of inspiration from later entry Super Metroid to bring this title into "line" with the other games in the series.

That makes this first game unique, but also arguably the weakest part of the foundation for the genre. By that I don't mean to slander this game; this is a great NES title and a formative work for Nintendo. Instead it's more accurate the say that the Metroidvania genre owes its format to the later titles (with Super Metroid being the most cited work). You can't have those later games without this first Metroid, but so much had to change for this series to really launch the whole genre, too.

Let's then throw up a little cheer for this first game. If it's been a while since you last explore Zebes throw this game into your console and give it another whirl. It won't give you any quarter but it also expects the best from you. Sometimes its good to go back and let a game challenge you this way.