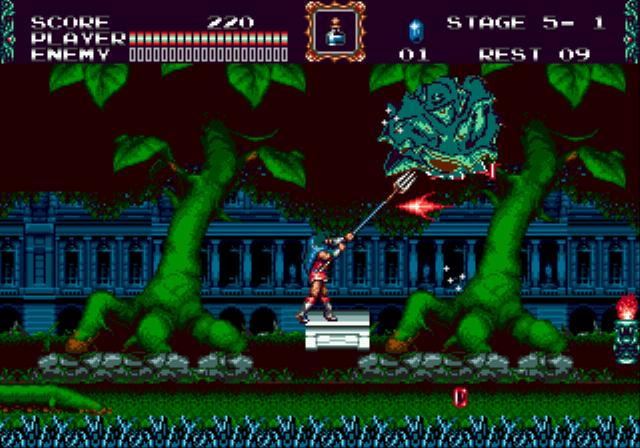 Although considered a master darkness, a prince of evil, even Dracula does crave a bit of lightness, a splash of color in his day. While he has many galleries to browse, sometimes the mood will strike and the Dark Lord will wander into the gardens of his castle, breathing in the fresh scent of flowers, and feeling of nature. He does this at night, of course, as the daylight would cause him some unfortunate issues, but has the gardens kept well tended so that, even in the evening, a stroll through the bushes and flower beds can seem peaceful (well, at least to the monsters that roam there).

That said, there's plenty of daylight where the gardens aren't filled with the undead, as the sunlight bathes the flowers and allows the plants to release their aroma. You can wander the trails, see the sights of the hedge maze, and enjoy all the pretty flowers without fear of a vampire coming up behind you and chewing on your throat. Maybe watch out for unes and other plant creatures, though; they thrive in the daylight.

Gardens are a more recent addition to the Castlevania thematics. This is easily to understand as older games didn't have the graphics to make mush differentiation between between trees in a forest and plants in a garden. Plants are plants and once you have one type why try to cram in more? However, as the graphical capabilities of the series improved lush settings were added and gardens became a fixture of the style of the series. 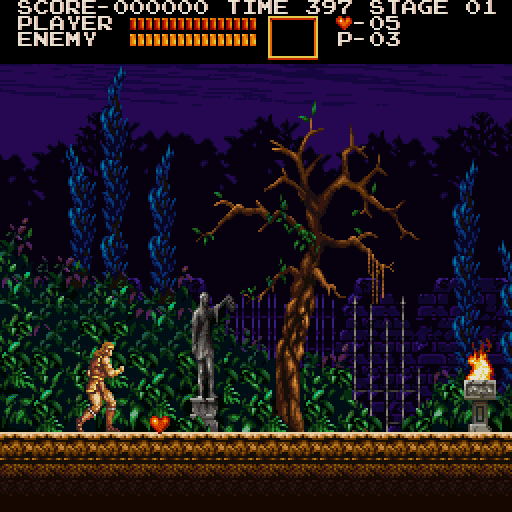 The first true gardens didn't technically appear inside the grounds of Castle Dracula, mind you. Appearing in Castlevania: Bloodlines, the Palace of Versailles is long stage that introduces aspects that would appear more frequently in later stages, like long marble galleries and a large garden section. This garden was dotted with giant rose bushes that marked both sides of a deep, blood-drenched fountain. Passing through this zone would lead into the palace proper, with either a stroll through the galleries above or the wine cellar below (depending on the hero played) all before mid-boss battles again a giant armor and then the enchanted columns. A final walk out of the castle culminated in a battle against the Princess of Moths.

After this the series next brought the gardens back in the expanded remake Castlevania Chronicles (aka Castlevania for the X68000). As part of the courtyard stage, the gardens here featured many dangers, from dryads in the trees to statues shooting arrows from atop their perches. This then led through a swamp section before descending into ice caverns for a battle against a Wizard to cap the stag.

It was in the Symphony of the Night release for the Sega Saturn, Castlevania: Nocturne in the Moonlight, that we had our next garden. Two of them, in fact, as a garden section was added to both the main castle and its inverse. The construction of both sides were the same: a cavernous section attached to the entrance area, leading into two long hallways, a large cavern featuring a broken bridge over water followed by a high garden filled with many flowers (and deadly plants). The Skeleton Leader guarded the regular gardens while the very similar Skeleton Guardian was the boss of the inverted Hell Gardens. Very little creativity was used in this area in both cases.

Naturally the gardens most people remember were those of the Villa, made famous in the N64 games, both Castlevania 64 and Castlevania: Legacy of Darkness. Technically there were two gardens in those games, with the first a smaller rose garden that also marked first appearance of Rosa in the original title. Meanwhile the larger garden maze outside was patrolled by the Gardener, culminating in a case through that maze (that, for Carrie led her to help the seemingly lost child, Malus. At the end of the gardens the heroes would face a battle against vampires, including the vampire maiden, before they could drop down into the caverns (or sewers) below. 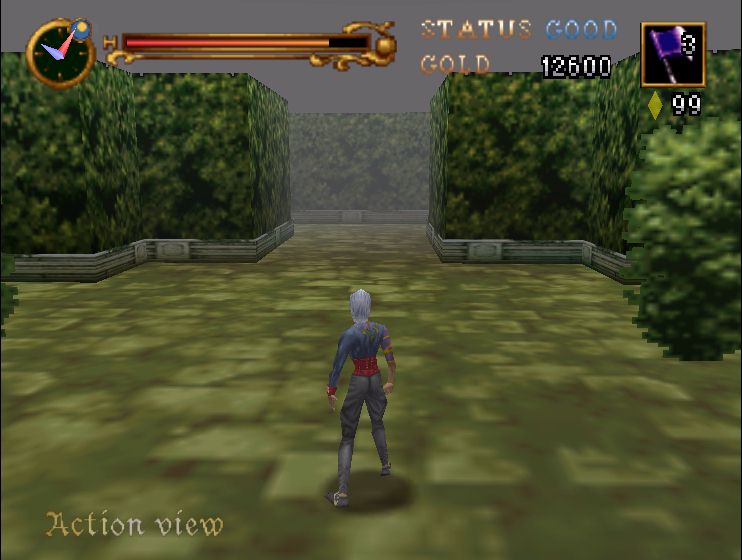 When next they appeared the gardens had taken on a very different, and very disjointed, place in Dracula's castle. Floating in the air, and seemingly connected by portals in the doorways, the rooms of the gardens were defended by many strong beasts, like Disc Armors and Werewolves. Although technically there wasn't a boss blocking the exit of the gardens into the rest of the castle, the final path into the Chaotic Realm was hidden in these plant-filled halls. Attempting to access the Chaotic Realm, though, would trigger the battle against Julius Belmont, probably the hardest fight in the game.

And then, chronologically all the way back at the beginning of the whole series, we had Castlevania: Lament of Innocence and the Garden Forgotten By Time. Technically the fifth accessible stage of the game, this area was a series of corridors laid out in a fairly straight-forward fashion. The big moment came near the end when the evil Medusa appeared for the final confrontation of this realm.

After this the series ventured outside of Castle Dracula proper for the remaining gardens. The Garden of Madness appeared in Castlevania: Dawn of Sorrow and, despite it being a fairly early zone of the game it did play a significant role in the title. The early visit to the area required hero Soma Cruz to battle against Dmitrii, an action that would set the plot of the game into motion. This was followed very quickly by a battle against the boss Malphas, which earned Soma the double-jump soul. After this Soma had to go out into the castle to find magical seals, which would grant him access to a final chamber in the gardens.

Seal in hand, Soma went into confront the evil Celia, the leader of the Dracula cult. Only by wearing Mina's charm did Soma see through the ruse Celia attempted. Dmitrii then emerged rom Soma's body, having stolen some of the power of Dominance, and he and Celia fled, down to the Abyss, forcing Soma to pursue them to put their evil scheme to rest, once and for all.

Castlevania: Lords of Shadow featured a couple of different garden-like areas. Pan's lair, for one, was very lush and filled with plants, a seeming call to the gardens of old. Then we had the garden maze within the Vampire Castle, the second stage of Chapter 6 of that game, acting as a bridge between the Castle Courtyard and the Main Hall to follow. Technically this could be considered Dracula's Castle the Dark Lord does eventually take it over (after the events of the main game), but that does feel like a little bit of a stretch.

Similarly reasoning would disqualify the Greenhouse in Castlevania: Lords of Shadow 2 as that is, once again, within the Vampire Castle. Sure, it's called Castle Dracula by then, but we all know the truth. It is a pretty garden, though, with red leaves dotting the ground. It featured the long boss encounter against Agreus, brother of Pan, who wanted revenge against Dracula for the death of his brother. It's a very drawn out affair.

The Palace of Versailles, garden section, in Castlevania: Bloodlines

The Gardens in Castlevania: Nocturne in the Moonlight

The Hell Gardens in Castlevania: Nocturne in the Moonlight

The Floating Gardens in Castlevania: Aria of Sorrow